U.S. #4318 pictures the Puerto Rican tody which can be found in the forest.

The earliest-known people to live in El Yunque were likely Taíno Indians.  In 1508, Spanish explorer Juan Ponce de León was sent to conquer the Taíno, as their conflict with the Carib people of South America was mistaken for aggression against Spain.  He founded the first settlement, called Caparra, in 1508.  A year later, the settlement was moved to a nearby small island and named Puerto Rico, which means “Rich Port.”
In 1816, the governor of Puerto Rico, Salvador Meléndez Bruna, limited the amount of wood that could be used to build Spanish ships, apparently conscious of the precious resource.  Then in 1824, Governor Lieutenant General Don Miguel de la Torre grew increasingly concerned over the amount of deforestation that resulted from government-sponsored farms.  He passed the island’s first conservation law, requiring the planting of trees to decrease harm to watersheds.  This was the first forest conservation law in Puerto Rico.  It was followed 15 years later by the creation of the Public Forestry Commissions and the first detailed forest law, outlining the steps to be taken to preserve this land.  In 1860, Spain established the first public forestry appropriation for Puerto Rico, specifically setting aside funds for the care of the land.  Then, in 1876, King Alfonso XII officially established the Luquillo Forest, one of the oldest-known reserves in the Western Hemisphere. 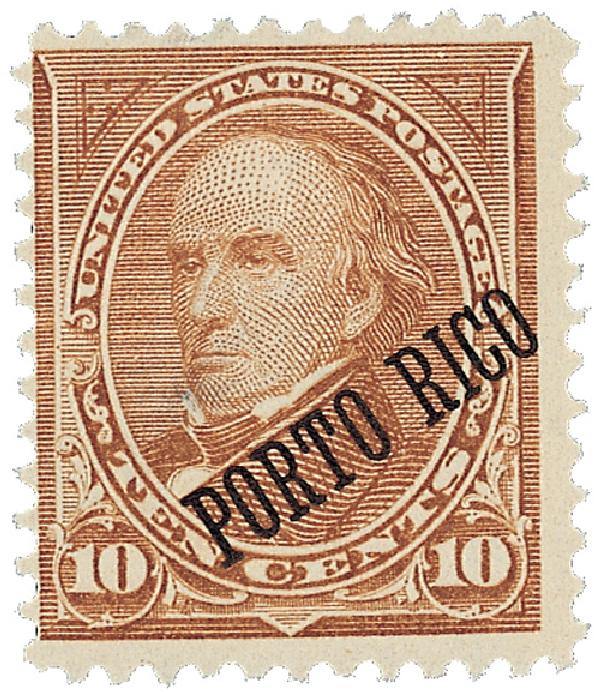 Puerto Rico #PT214 – The U.S. overprinted stamps like this for use in Puerto Rico.

In the fallout of the Spanish-American War, Spain ceded Puerto Rico to the United States.  Puerto Rico was America’s first unincorporated territory.  Near the end of 1902, President Theodore Roosevelt began researching where to create his first forest reserve.  Shortly after Christmas, he asked Alexander Agassiz, president of the National Academy of Sciences, to do a “comprehensive investigation” of the natural history of the Philippines and Puerto Rico.  Agassiz’ recommendation, in addition to other reports concerning deforestation by cocoa farmers and rubber merchants in Puerto Rico, made Roosevelt’s decision clear.  On January 17, 1903, he established the 5,116-acre Luquillo Forest Reserve, named after the Luquillo Mountains where it was located. 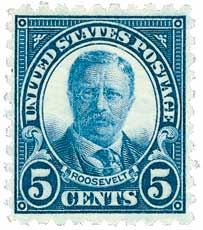 Shortly after establishing America’s first tropical rainforest reserve, Roosevelt assembled a team of botanists, ornithologists, and foresters to create a detailed report on the forest.  Roosevelt was fascinated by the forest and the report he received on it in 1905.  Discovering the 100-foot-tall tabonuco trees, tropical fruits, and breathtaking waterfalls, Roosevelt knew extra steps would need to be taken to protect the forest that contained over 240 different types of trees.  Roosevelt later visited the park to see the rainforest and the famous Puerto Rican parrots for himself.

After the park was renamed the Luquillo National Forest in 1907, the first boundary survey was completed, measuring the park to be 12,443 acres.  Throughout the 1920s and 30s, several plantings occurred, including the first mahogany plantations and the island’s first tree nursery.  Beginning in 1933, the park was part of the Emergency Conservation Program and eventually the Civilian Conservation Corps program.  Through these two projects, a great deal of reforestation took place, with more than 18,000 acres of trees of 53 different species.  This period also saw the construction of new roads and recreational and administrative buildings that remain today. 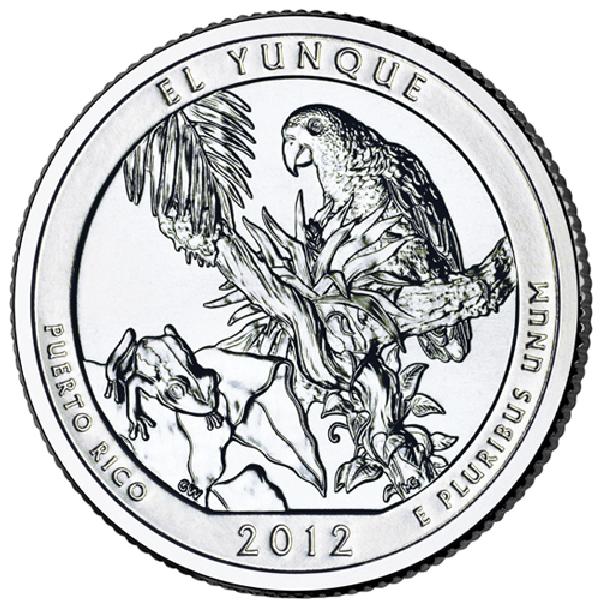 In 1935, the U.S. Forest Service purchased 1,900 acres in the Toro Negro area of Puerto Rico.  This land was added to Luquillo and it was renamed the Caribbean National Forest.  Four years later, the Tropical Forest Experiment Station was established.  Now known as the International Institute of Tropical Forestry, it made this tropical forest one of the best studied in the world.

Over the next few decades, the forest underwent intense study from a variety of groups interested in its protection.  In 1946, it was designated an Insular Island Wildlife Refuge.  During the 1940s and 50s, part of the forest was made into the Baño de Oro Research Natural Area, and was considered an experimental forest.  And on April 2, 2007, U.S. President George W. Bush changed the park’s name to the El Yunque National Forest, at the wishes of the Puerto Rican people, who felt this was more culturally accurate.

Click the images to add this history to your collection