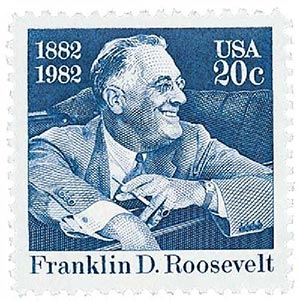 As President, Roosevelt put this knowledge to work, personally approving each of the stamps issued during his 12 years in office. He also made suggestions for stamp subjects and designs. The result is more than 200 US stamps that chronicle US history, reveal the beauty of our most scenic National Parks, and pay tribute to noteworthy Americans.

U.S. #3185a from the Celebrate the Century series.  Click image to order.

During the course of the war, Roosevelt used US stamps to inspire Americans and send messages of hope around the world. With an eye to the future, FDR avoided picturing displays of US military might. Classics like the Iwo Jima, China Resistance, and Overrun Countries stamps remain collector favorites today. In fact, the last official act Roosevelt performed before his death was approving the design for a postage stamp.