US #1193 pictures Friendship 7, which carried John Glenn on the first successful American orbit of the Earth.  Click image to order.

On January 31, 1961, Mercury-Redstone 2 launched Ham the Chimp into space.

Begun in 1958, Project Mercury was the program to launch the first American into space.  Before sending people into space, NASA did a series of unmanned test flights, leading to Mercury-Redstone 2. 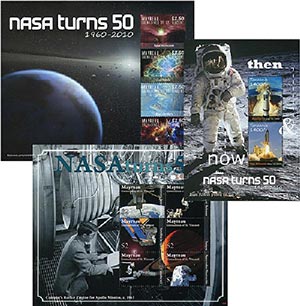 In December 1960, NASA launched Mercury-Redstone 1A, to test the spacecraft that would be used for the later mission. When that launch succeeded, they began preparations for the next step.  In early January 1961, six chimpanzees and 20 medical specialists and handlers were brought to Cape Canaveral.  The chimps underwent three weeks of training in Mercury simulators. Then the day before the flight, one male chimp, Ham was selected to go on the mission, with a female chimp Minnie named the backup.  The name Ham was taken from the Holloman Aerospace Medical Center.

At 12:53 pm on January 31, 1961, Ham was placed into the spacecraft.  The craft had six new systems that weren’t on prior flights, including environmental controls, attitude stabilization, live retrorockets, voice communications, a closed loop abort sensing system, and a pneumatic landing bag.  The launch was delayed for nearly four hours due to a few minor issues, but at 4:55 pm, the MR-2 lifted off.  The rocket ended up on a high flight angle, which would lead to it missing its landing area by 130 miles.  Additionally, the cabin pressure dropped due to an unexpected issue, but Ham was safe in his space suit.  The rocket also reached a higher speed than expected and Ham was weightless for 6.6 minutes instead of the expected 4.9 minutes.

Despite the issues that arose, Ham successfully went about completing his tasks, which included pushing levers about 50 times. There were also cameras onboard that showed how Ham reacted to the weightlessness and also revealed a surprising amount of dust floating in the air.

Then 16 minutes and 39 seconds after the launch, the craft splashed down in the Atlantic.  It landed out of sight of the recovery forces, but they found the ship within a half hour and airlifted it to the nearby USS Donner.  Inside they found Ham in good spirits, and he excitedly accepted an apple and half an orange. 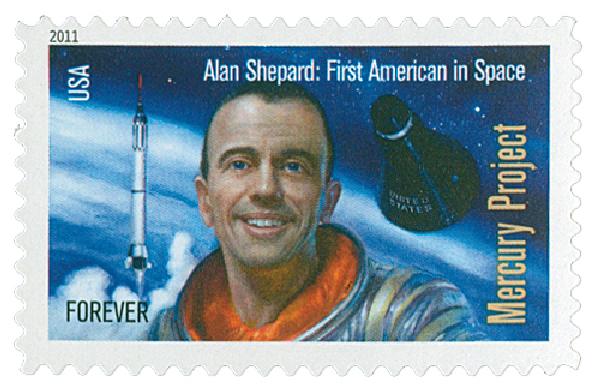 US #4527 pictures Alan Shepard and the Freedom 7.  Click image to order.

The issues that occurred during the mission showed NASA that the planned MR-3 wouldn’t be ready for a human passenger. That flight was postponed while Mercury-Redstone BD was launched in March to test a new booster.  They would achieve their goal of getting a man in space that May when Alan Shepard made a 15-minute sub-orbital flight in the Freedom 7.  The spacecraft used for MR-2 is now on display at the California Science Center in Los Angeles.

Click here for a video about Ham and Mercury-Redstone 2.