Posted on January 4, 2016 by MysticStamp

The first people to settle in Utah arrived thousands of years ago.  These Indians made their homes in pueblos and caves.  When the first Europeans arrived in 1776, there were four major Indian groups living in the area – the Gosiute, Paiute, Shoshone, and Ute.  The Navajo moved into the region in the 1860s.

Spanish explorers reached the Grand Canyon in today’s Arizona in 1540.  These explorers may have reached Utah.  For more than 235 years after this, no European explorer reached the area.  During the American Revolutionary War, in 1776, two Spanish Franciscan friars explored Utah, reaching Lake Utah.  A few other Spaniards came to Utah, but the Spanish were not interested in settlement because of the harsh environment.

The first Americans believed to have reached Utah were members of a fur-trading party.  They crossed present-day northern Utah in 1811-12.  Famous frontiersman and scout Jim Bridger is thought to be the first white person to see the Great Salt Lake.  Bridger tasted the salty water in the winter of 1824-25, and believed he had reached the Pacific Ocean.  Soon, more trappers and traders came to Utah.  A trail connecting Santa Fe, New Mexico, and Los Angeles, California, brought many travelers through the area. 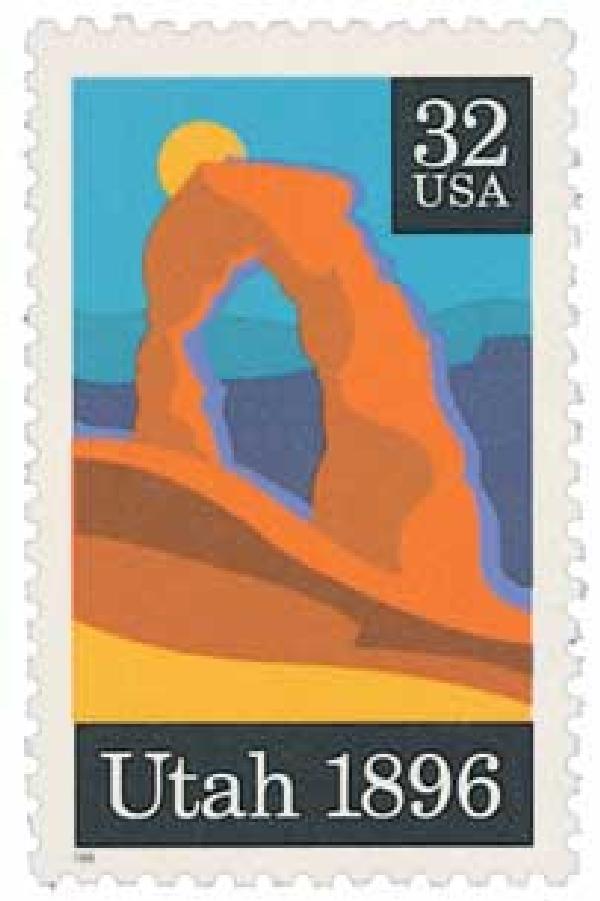 Following the death of Mormon leader Joseph Smith in 1844, Brigham Young took his place and traveled America searching for a place where his people wouldn’t be persecuted for their religious beliefs.  After moving from Ohio, Missouri, and Illinois, Young led the Mormons west.  In 1847, they reached the Great Salt Lake and settled the area.  Two years later, they established the Perpetual Emigrating Fund which helped about 50,000 Mormons move to Utah.  The Mormons established the State of Deseret in 1849, with a temporary government led by Young.  A constitution was adopted, and the settlers asked to be admitted to the Union.  However, Congress was embroiled in great debates about slavery at the time.  With the Compromise of 1850, the Utah Territory was established. 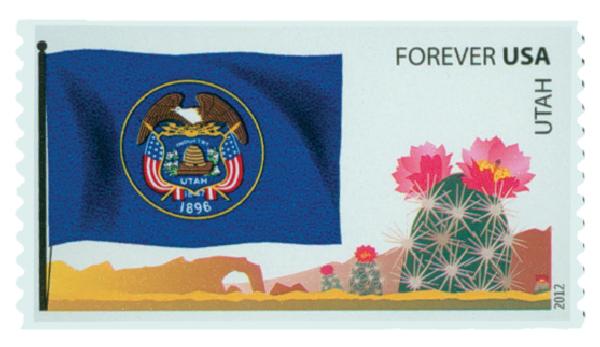 U.S. #4324 pictures the flag with a blooming cactus and arch formation. 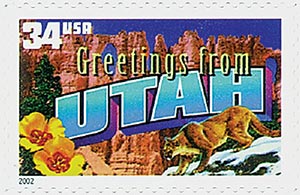 U.S. #3604 pictures the Wall of Windows arches in Bryce Canyon National Park as well as a mountain lion and sego lily.

In 1862, Congress outlawed polygamy and again sent troops to Utah.  These troops were ordered to prospect for minerals, in hopes that mining could attract non-Mormons to the area.  Gold and silver were discovered in 1863, but transportation difficulties reduced the profits from Utah’s mineral wealth.  Though many mining companies were established, few new settlers came to the area.

The Federal Government began enforcing the laws against polygamy during the 1880s.  About 1,000 Mormons were fined or sent to prison.  In 1887, a law was passed allowing the Federal Government to seize church property for use by public schools.  In 1890, the church began discouraging polygamy, and by 1904, it was prohibited.

Utah submitted a new constitution to Congress in 1895.  This constitution outlawed polygamy and protected the government from church domination.  As a result, Utah achieved statehood on January 4, 1896.