Posted on January 9, 2021 by MysticStamp

US #772 – Click the image to read the neat story behind Connecticut’s famed “Charter Oak.”

On January 9, 1788, Connecticut ratified the US Constitution, making it the fifth state to join the young United States.

US #1637 – The state flag bears three grapevines – a symbol of good luck, peace, and proof of God’s greatness.

As the number of Connecticut colonists grew, the native Pequot Indian tribe grew hostile, fearing that settlers would challenge their control of the region.  After several Indian attacks, Captain John Mason led a small army aided by Mohegan and Narragansett warriors against the Pequot in 1637.  Mason quickly defeated the Pequot. 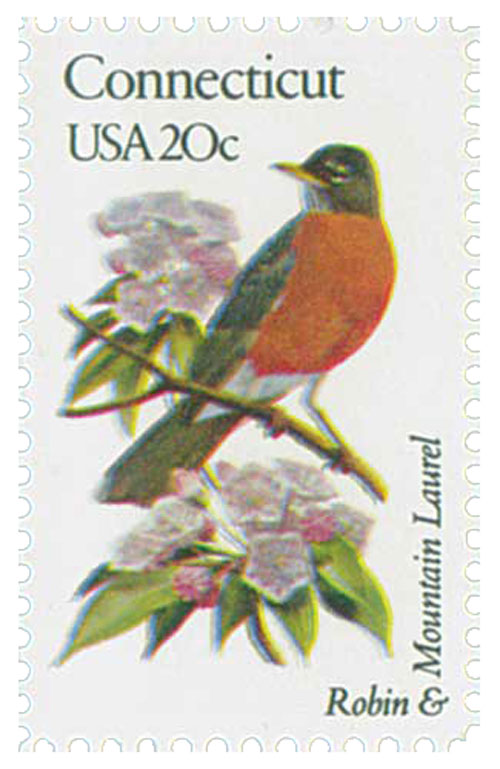 US #1959 – The Connecticut state bird and flower – the robin and mountain laurel.

The colony of New Haven was founded as a Puritan theocracy, or church-ruled state, in 1638.  Five years later, Branford, Guillford, Milford, Stamford, and Southhold (located on Long Island) joined the New Haven colony.  By 1660, many towns had joined the Connecticut Colony, including Fairfield, Farmington, Middletown, New London, Norwalk, Saybrook, and Stratford.  In 1662, John Winthrop Jr. of the Connecticut Colony, was granted a charter from the King of England.  This charter gave the colony control of a 73-mile-wide strip of land running from Narragansett Bay to the Pacific Ocean (at that time, the distance to the Pacific was unknown).  This area included the New Haven Colony.  Despite objections from the New Haven colonists, the two were united in 1665.

US #2340 pictures the whaling ship Charles W. Morgan in the coastal city of Mystic.

A century later, as America waged war on England, the majority of Connecticut colonists favored independence.  And on June 14, 1776, a resolution was passed backing this action.  On July 4, 1776, Connecticut adopted the Declaration of Independence.  Two years later, Connecticut approved the Articles of Confederation – the forerunner of the United States Constitution.

US #3567 pictures the harbor at Mystic Seaport.

When the fighting broke out in Massachusetts in 1775, hundreds of Connecticut men joined the patriot forces.  Connecticut’s governor, Jonathan Trumbull, was the only colonial governor to hold office throughout the revolution, because he sided with the patriots.  Trumbull was a close friend and trusted adviser to George Washington, who called him Brother Jonathan.  Nathan Hale was also a leading patriot from Connecticut.  Hanged by the British for being a spy, Hale’s dying words, “I only regret that I have but one life to lose for my country,” have made him a legend.

US #4281 pictures the Connecticut state flag with different types of boats along the shoreline.