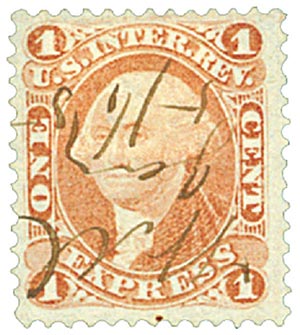 On July 1, 1862, President Abraham Lincoln signed the Revenue Act of 1862 into law, to help fund the Civil War.

Confederate victories at Fort Sumter and the First Battle of Bull Run signaled a protracted war, and it was soon apparent the conflict would also be expensive – the most spending to date in US government history.  In 1861 alone, the government spent $50 million to feed its troops and another $50 million on supplies, for an amount equal to more than $8 billion in modern wages.  Those costs rose as the war continued, with the final tally over $164 billion in today’s currency.

Treasury Secretary Salmon P. Chase originally planned to fund the Civil War with loans, but the early Union losses threatened investor confidence.  To persuade lenders of the nation’s solvency, a massive tax increase was needed.  On July 1, 1862, President Lincoln signed the Revenue Act of 1862 into law.  The act created new taxes that became effective on October 1st of that year.  It also created the Office of the Commissioner of Internal Revenue.  The Internal Revenue Office needed assessors and collectors for all the taxes that had to be paid.  Within a year of the passing of the Revenue Act of 1862, the department went from having four employees to almost 7,000.

The Revenue Act of 1862 created a tax on virtually every document along with proprietary items including matches, perfume, and medicine.  The act included three schedules.  Schedule A of the Revenue Act of 1862 taxed inheritances, luxury goods such as carriages and yachts, and applied duties to business activities, with those taxes payable directly to the Office of Internal Revenue.

Schedule B set forth taxes on 25 major categories of documents and several smaller categories.  This portion of the act also stipulated that Revenue tax stamps should be applied directly to the documents.  Schedule C featured three categories of retail items to be taxed: (1) medicines, (2) perfumes and cosmetics, and (3) playing cards.  Each of the taxable items required a Proprietary stamp with the denomination based on the article’s retail price. 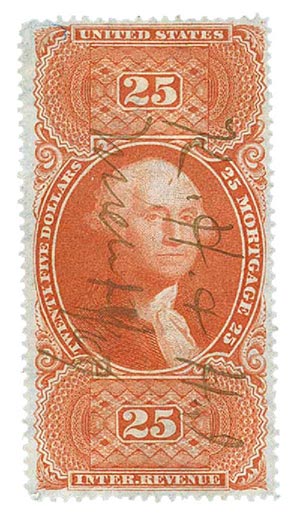 To serve as proof the proper tax had been collected, the first adhesive US Revenue stamps were planned.  The stamps were intended to be perforated; however, time was of the essence.  To speed the process, the printing company was allowed to ship the early stamps without perforations or with partial perforations.

On July 17, 1862, former Massachusetts governor George Boutwell was sworn in as the first Commissioner of Internal Revenue.  Boutwell approved all of the early Revenue stamp designs and accepted Butler and Carpenter’s bid of 13 cents per thousand stamps.  John Butler was an engraver and printer as well as Lincoln’s confidant.  Joseph Carpenter, who served briefly during the Civil War, was the son of Samuel Carpenter, whose firm Toppan, Carpenter Co. produced early US stamp issues.  Butler and Carpenter’s bid was accepted on August 8, leaving less than two months to produce the stamps before the law went into effect on October 1, 1862. 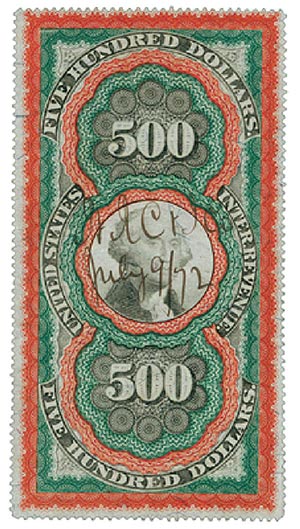 The original Tax Act called for each taxable item to have its own specific Revenue stamp.  Combined with tax rates based on retail value, this requirement established the need for several new Revenue stamps.  Ultimately, 94 separate stamps were issued by the end of 1862.

Butler and Carpenter completed the first two plates in three weeks, submitting them to Boutwell on September 3, 1862.  The plates were for the 1¢ and 2¢ Proprietaries. Printing began on September 11, and the stamps were delivered by the end of the month, making them the only issues available when the new tax law went into effect on October 1st. 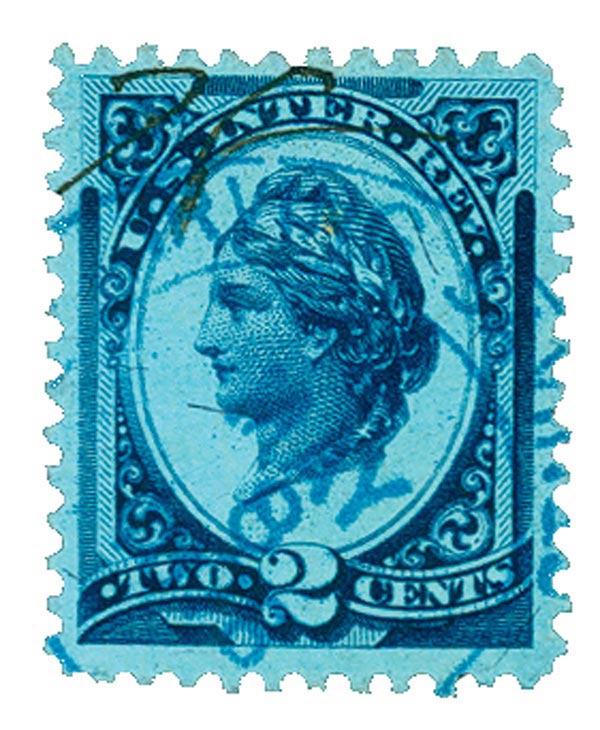 US #R152a – The Liberty Issue of 1875 were the first Revenues that didn’t picture George Washington.

Purchase of the Revenue stamps amounted to the prepayment of the applicable tax.  The purchaser was required to cancel the stamp by writing the date and initialing the stamp.  Failure to use a stamp was punishable by a $50 fine and having the document declared invalid.

The inconvenience – and lack of necessity – of using specific stamps for each taxable item quickly became apparent.  On Christmas Day, 1862, the requirement was discontinued.  After that date, the stamps could be used interchangeably with the exception of proprietary items, which continued to require their own specific stamps.

“Proprietary” items are described as those having a private formula, exclusive right, letters patent, or promoted as a proprietary medicine.  Some enterprising businessmen took advantage of a special accommodation and designed their own Revenue stamps under government control.  Known as “private dies” or “match and medicine” stamps, they allowed their manufacturers to advertise goods through their unique designs.  Companies using private die stamps also received a discount of 5 to 10 percent, while the government believed the unusual designs discouraged counterfeiting, thereby increasing revenue. 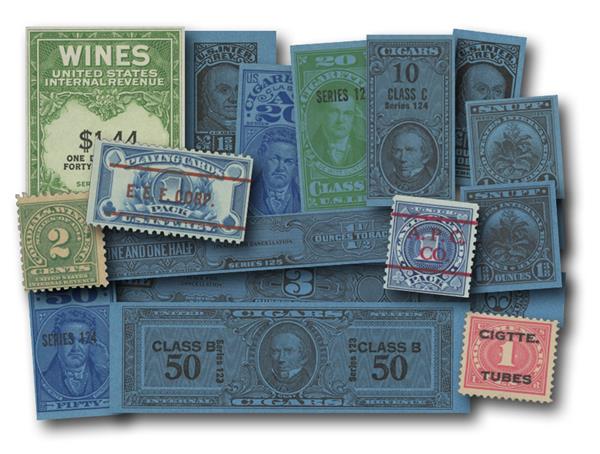 Many of the new Revenue tax rates were based on the value of certain transactions.  The appropriate Revenue stamp, which indicated the tax had been prepaid, was then attached to the transaction’s legal document.  As a result, several high-value Revenue stamps were needed, especially for mortgages and conveyances.

Other examples of documentary-type Revenue stamps subject to the act are probate of will, inland exchange, manifest, and power of attorney.  Ironically, the Civil War and subsequent draft created a market for these stamps.  A substantial part of the male population had mobilized to fight the war; the difficulty of handling business transactions long distance made power of attorney a necessity, and a number of wills were probated as a result of soldiers’ deaths.

Virtually every legal document was taxed under the Act of 1862.  Although Documentary stamps accounted for approximately 25% of the 9 billion Revenue stamps sold, they were responsible for about 60% of the revenue collected.  The majority of the taxable documents were bank checks and sight drafts, real estate transactions, insurance, bonds, and powers of attorney.  The most common use was bank checks, with an initial tax of two cents for any check or sight draft over $20.  In 1864, the tax was amended to include all checks. 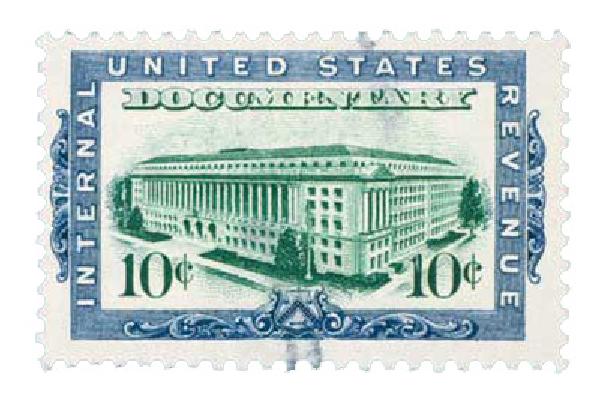 US #R734 – One of the final Revenue stamps, it pictures the Internal Revenue Building in honor of the 100th anniversary of the IRS.

The Civil War ended in 1865.  States that had seceded and joined the Confederate States of America were now subject to the same federal tax laws as those that had not.  Until the use of Revenue stamps was abolished in 1883, money raised through the tax was used to pay down the accumulated Civil War debt.  Revenue stamps were brought back into use in 1898 to help fund the Spanish-American War.  They were then used off and on until the 1960s for a variety of purposes. 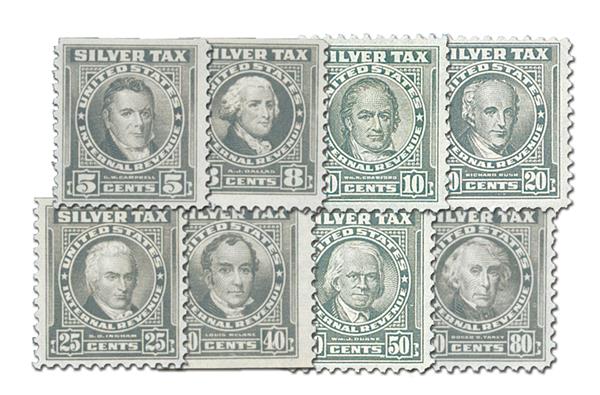 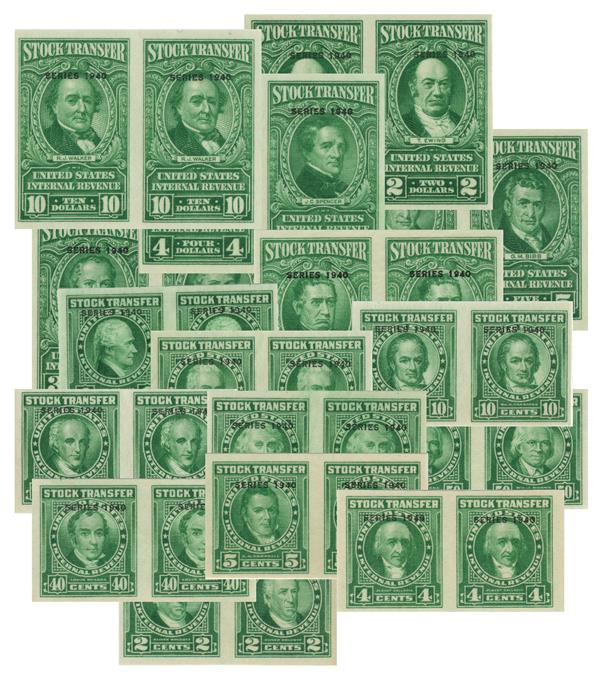 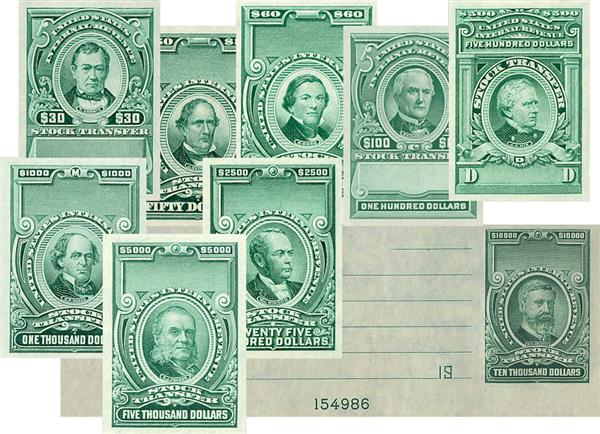 Click here to view our wide selection of Revenue stamps.