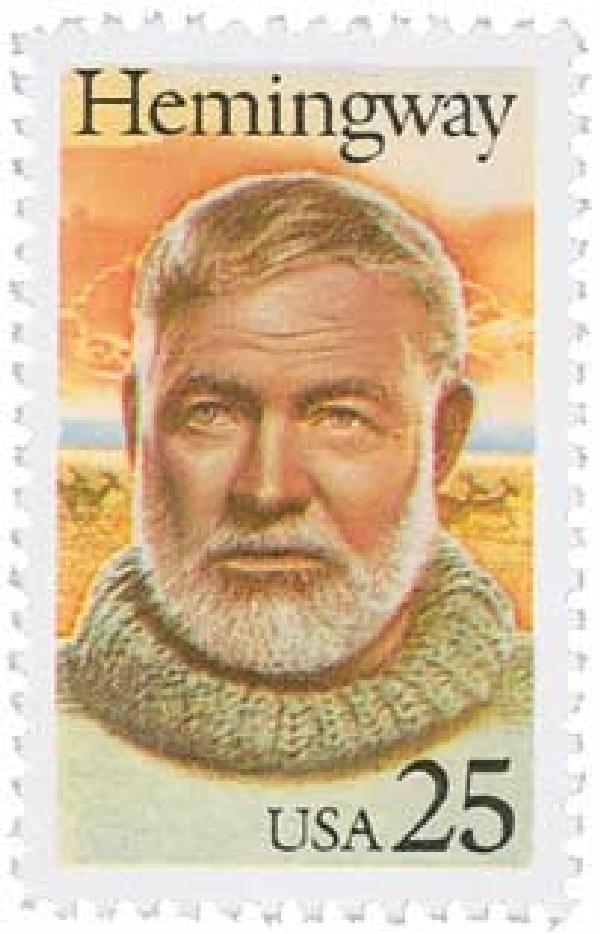 US #2418 – Hemingway was the seventh honoree in the Literary Arts Series. Click image to order.

Hemingway came from a well-respected family in the Chicago suburb.  His mother insisted he learn to play the cello, which he later credited as useful to his writing.  His father taught him to hunt, fish, and camp, giving him a life-long interest in outdoor activities.

In school, Hemingway participated in several sports, including boxing, track and field, water polo, and football.  He did well in his English classes and submitted work for the school newspaper.  He also edited the paper and the yearbook.

Hemingway went on to work for The Kansas City Star for six months.  Though his time there was short, he used the paper’s style guide for his future writing: “Use short sentences.  Use short first paragraphs.  Use vigorous English.  Be positive, not negative.” 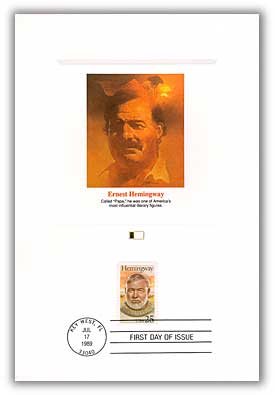 After America entered World War I, Hemingway attempted to join the US Army, Navy, and Marines but was rejected because of poor eyesight.  He then answered a recruitment ad for the Red Cross and became an ambulance driver in Italy.

On the night of July 8, 1918, Hemingway was handing out chocolate to Allied soldiers.  Suddenly an Austrian mortar shell hit their location, knocking Hemingway unconscious.  The explosion buried him in the dirt and pieces of shell were embedded in his right foot, knee, thighs, scalp, and hand.

The blast also hit three Italian soldiers.  Two died shortly after the blast. And when Hemingway regained consciousness he carried the third injured soldier to a nearby first aid dugout.  He was further injured by machine-gun fire on the way.  Hemingway forgot how he got there or that he’d carried a soldier, but eventually remembered.  The Italians later awarded him a medal of valor, the Croce de Guerra, for his bravery in this instance.

Hemingway would spend the next six months in a Milan hospital recuperating.  It was there he met and fell in love with a Red Cross nurse, Agnes von Kurowsky.  They were engaged, but she broke it off to marry an Italian officer, devastating Hemingway.  His wartime experiences provided inspiration for several future stories, though this particular incident was influential in his popular novel, A Farewell to Arms. 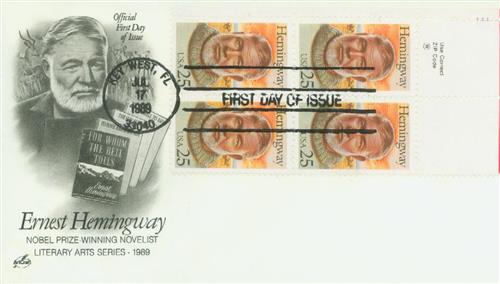 Hemingway returned to the US at the end of World War I, married, and took a job as a journalist.  Wanderlust struck again, and the couple traveled to Paris.  Hemingway became a member of the “Lost Generation,” a group of expatriates that included fellow writers Ezra Pound and Gertrude Stein.  Both individuals had a profound influence on Hemingway’s writing style.

After his first marriage failed, Hemingway remarried and settled in Key West, Florida.  He earned fame for his novels The Sun Also Rises and For Whom The Bell Tolls as his second marriage soured.  Remarried to a fellow war correspondent, Hemingway covered Chiang Kai-Shek’s war against Japan, purchased a home in Cuba and hunted German submarines during World War II.  He was court-martialed for violating the Geneva Convention, and observed the D-Day landings as a war correspondent for Collier’s magazine. 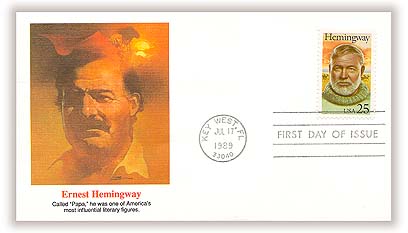 Hemingway remained in Cuba following Fidel Castro’s rise to power.  Although he initially embraced the communist dictator, Hemingway left Cuba when conflicts increased.  Hemingway was awarded the Pulitzer Prize in 1953, and the Nobel Prize in Literature in 1954 for The Old Man and the Sea.  In that tale, an old fisherman suffers the loss of his greatest catch but recovers his own lost dignity in the process. 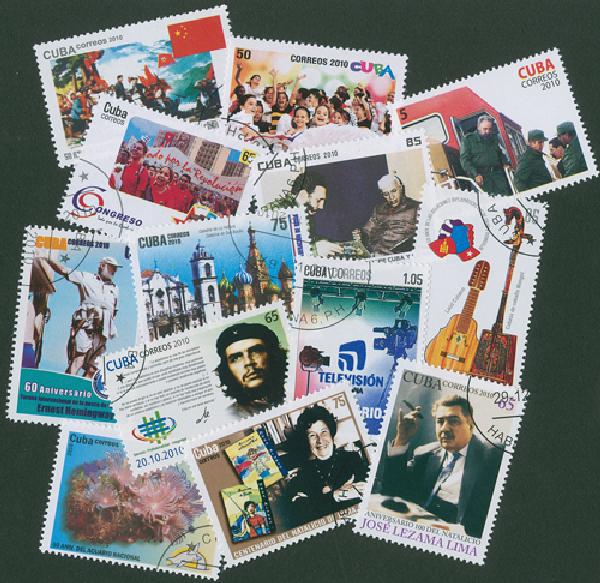 In his final years, Hemingway moved around frequently and was increasingly paranoid, believing (somewhat accurately) that the FBI had been keeping tabs on him.  He was admitted to the Mayo Clinic twice, but ultimately killed himself on July 2, 1961.  It was later revealed that he had been diagnosed with hemochromatosis, a disease in which the body is unable to metabolize iron, which leads to mental and physical deterioration.

Despite his unfortunate final years, Hemingway is considered one of America’s great 20th century novelists, inspiring a generation of writers with his understated, minimal prose.

Click here to read some Hemingway quotes and excerpts from some of his works.