Bolivar came from a wealthy family and moved to Spain in 1799 following the deaths of his parents. Bolívar was married in 1802, but his wife died the following year.  After that, he went to Europe and befriended Napoleon.  However, a few years later Napoleon named Joseph Bonaparte King of Spain, and its colonies (including Venezuela) and Bolívar joined in the growing resistance movement. 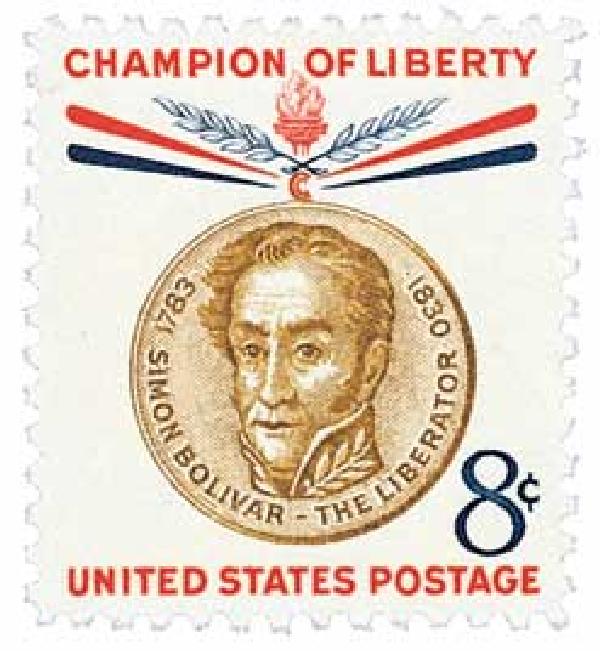 US #1111 – Bolívar was the second subject in the Champions of Liberty Series. Click image to order.

In 1810, Bolívar’s resistance group in Caracas gained independence and he traveled to Britain for a diplomatic mission.  However, while he was gone, the battle for control in Caracas and much of South America continued.  Bolívar then returned to Venezuela determined to free the country from Spanish control.  In May 1813, he invaded Venezuela, starting his Campaña Admirable (Admirable Campaign.)  The campaign was a success and led to the creation of the Venezuelan Second Republic and Bolívar being named El Libertador (The Liberator). 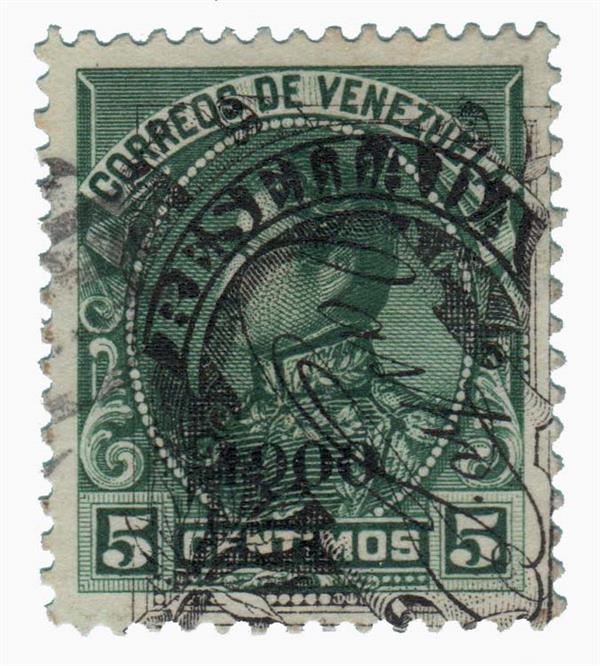 Bolívar’s victory was short-lived, as a civil war broke out less than a year later.  He was forced to flee the country and hid in Jamaica.  There, Bolívar penned his “Letter from Jamaica,” which explained his vision of a South America with a parliament similar to England and a president that could serve without being removed from power.

After gaining support from Haiti, Bolívar returned home and led several military victories.  In 1821, two years after New Grenada was freed from Spanish control, the Gran Columbia was formed with Bolívar as president.  That same year, Bolívar liberated Peru from Spain and reorganized its political and military system.  On August 6, 1825, the Republic of Bolivia was formed, making Bolívar one of a very few men to have a country named after him. 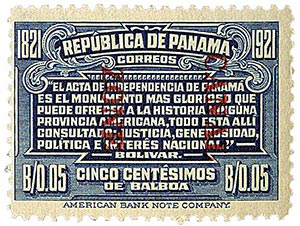 Canal Zone #CZ62 – Canal Zone stamp with a quote from Bolivar.  Click on the image to read the quote in English. Click image to order.

By 1825, Bolívar believed that his goal of a united South America was near.  The following year, he called the Congress of Panama to meet in the first hemispheric conference.  Many leaders did not agree with his dictatorial policies, and a number of separatist movements began.  A civil war quickly erupted.  Following a failed assassination attempt, Bolívar resigned in May 1830. 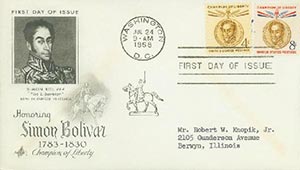 Later that year, Bolívar planned to sail to Europe, but died on December 17, 1830, possibly from tuberculosis.  Today Bolívar is a hero in many areas of South America.  The currencies of Bolivia and Venezuela are named after him.  Many cities also have a main square known as a Plaza Bolívar.  His statues stand in cities throughout South America and around the world.  He’s also been called the “George Washington of South America.”