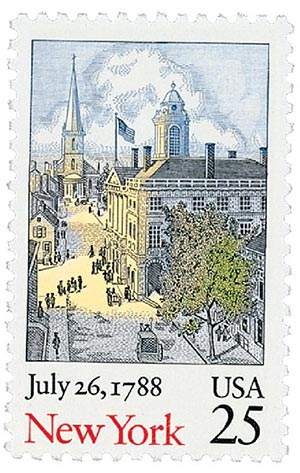 Giovanni da Verrazzano, an Italian explorer sailing for France, was probably the first European to reach New York in 1524. Henry Hudson, an Englishman serving the Dutch, sailed up the Hudson River in 1609. His exploration gave the Netherlands rights to the territory of much of New York, New Jersey, Delaware, and part of Connecticut. The Dutch called this land New Netherland. In 1609, the French explorer Samuel de Champlain entered the northern portion of New York, claiming that area for his country. 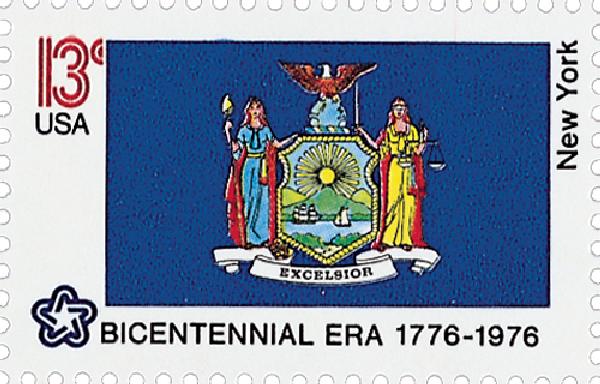 U.S. #1643 – The New York flag pictures the state seal, which includes Lady Liberty and Justice, a ship on the Hudson River, and an eagle.

In 1621, a group of Dutch merchants formed the Dutch West India Company, and were given exclusive rights to trade in New Netherland for 24 years. The company sent 30 families to settle the region in 1624. Some of these people founded Fort Orange, now known as Albany. This was the first permanent European settlement in New York. In 1625, a group of Dutch colonists began building a fort and town, called New Amsterdam, on Manhattan Island. The next year, the Dutch governor, Peter Minuit, bought Manhattan from the Indians for goods worth 60 Dutch guilders – about $24. 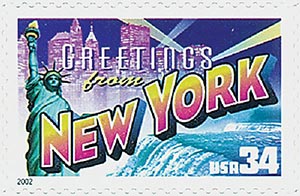 U.S. #3592 – This stamp design originally included the Twin Towers, but it was decided to remove them.

Over time, the English became more interested in the area, and in 1664, King Charles II of England granted his brother, James, the Duke of York, a charter for the New Netherland area. A fleet of English warships was sent to take the area. When the ships arrived in today’s New York harbor, New Amsterdam’s governor, Peter Stuyvesant, surrendered without a fight. The English renamed the area New York, after the Duke of York. The Duke would later become King James II of England. 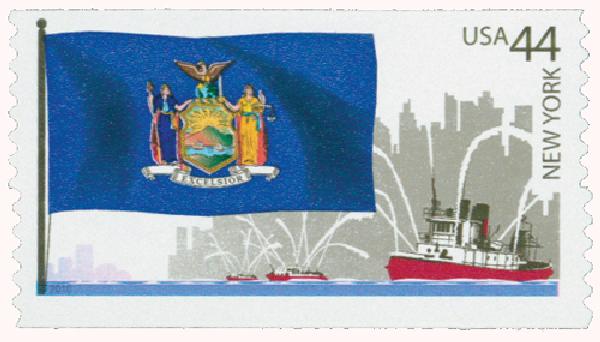 U.S. #4310 pictures the New York flag next to fireboats and a skyline.

While the English took control of southern New York, the French moved into the north. The French built a fort at Crown Point on Lake Champlain in 1731. War had broken out in Europe between France and England in 1689. Soon, New York became a battlefield. From 1689 to 1763, the French and their Algonquian allies, as well as the English and their Iroquois allies, fought a series of four wars. These costly conflicts delayed new exploration and settlement in New York. A peace pact was signed on February 10, 1763. The wars cost France all of her possessions in North America.

Many New Yorkers resented the presence of British soldiers, authoritative royal judges, and taxation without representation. Still, some citizens remained loyal to the crown during the American Revolution. Additionally, these Loyalists aided the British and enlisted the help of the Iroquois as allies against the patriots. 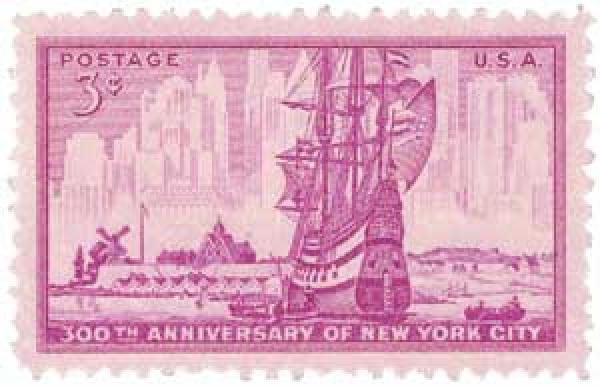 New York established its first independent government in 1776. On February 6, 1778, New York approved the Articles of Confederation. Although New York was opposed to a strong federal government, it ratified the United States Constitution on July 26, 1788.

Much of the fighting during the War of 1812 took place in the frontier areas of New York. After the conflict was resolved, large amounts of settlers moved to the northern and western portions of the state. Then the Erie Canal was completed in 1825. The canal provided an all-water means of transportation from the Great Lakes to the Atlantic Ocean. This greatly lowered the cost of transporting goods. Railroads developed shortly after and by 1850, New York led the nation in population, manufacturing, and commerce, truly deserving the name Empire State. 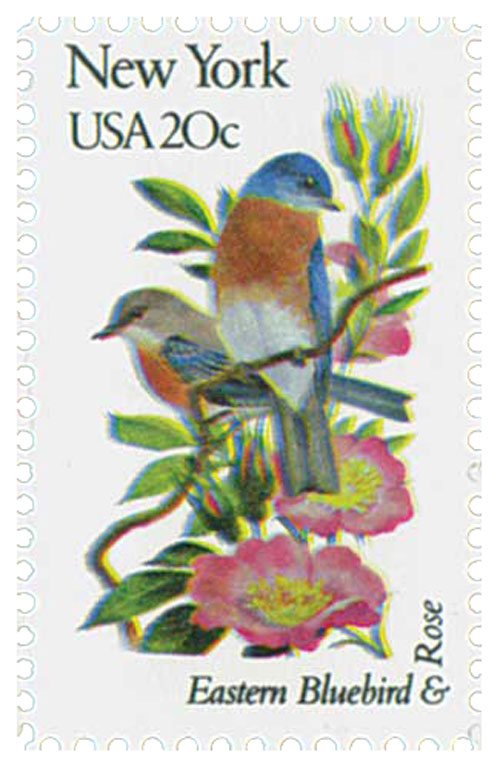 Well before the start of the Civil War, New York was largely an anti-slavery state. However, many citizens did not feel obligated to fight in the war, and opposed the draft. In July 1863, mobs rioted in New York City for four days. This civil unrest was finally stopped by troops called from the battlefield. Despite these riots, New York provided more soldiers, supplies, and money to the Union than any other state.

Following the Civil War, New York has largely benefitted from economic growth. It is the nation’s leading center of banking, communications, and finance. New York City is the largest city in the U.S. and the 6th largest in the world. It is one of the world’s leading business centers, and has one of the world’s biggest and busiest seaports. The United Nations headquarters are based there as well, leading many people to claim New York City as the “capital of the world.”

Click here to se what else happened on This Day in History.