US #1434-35 were issued to coincide with the flight of Apollo XV and to mark the 10th anniversary Alan Shepard becoming the first American in space. Click image to order.

On July 26, 1971, Apollo 15 was launched, bringing the fourth American crew to the Moon’s surface.

Apollo 15 would become the first of three extended missions to the moon, known as K missions.  The mission would be more focused on science than previous landings had been.  It also marked the first use of the lunar rover.

Over a decade before the first moon landing, scientists speculated about the possibility of traveling the lunar surface.  As early as 1952, Wernher von Braun published a series of articles titled “Man Will Conquer Space Soon!” which discussed the logistics of a six-week stay on the moon.  By the mid-1960s, von Braun, then director of NASA’s Marshall Space Flight Center, revealed that research had already begun for lunar vehicles. 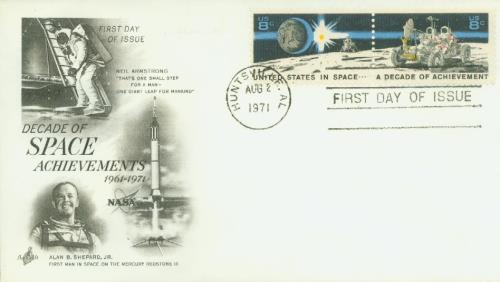 But the drive to keep costs down meant that no lunar vehicles were ready by the time we landed the first men on the moon in 1969.  However, following that success, funding was granted for the creation of lunar rovers.  They were developed in just 17 months and cost $38 million for four rovers. 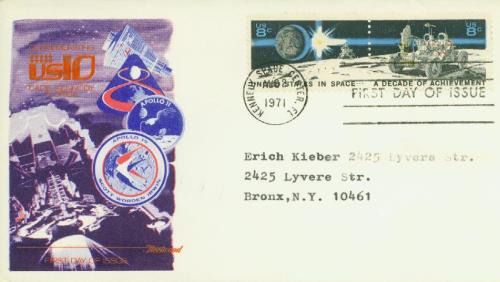 The result was like something out of the future.  Made out of a variety of lightweight alloys, the 463-pound rovers could carry up 1,080 pounds.  They were folded so they could fit in the cargo bay and locked into place as they were removed and opened up.  The rovers could reach a top speed of eight miles per hour, though on a later mission Apollo 17 astronaut Eugene Cernan set the lunar land-speed record at 11.2 miles per hour in 1972. 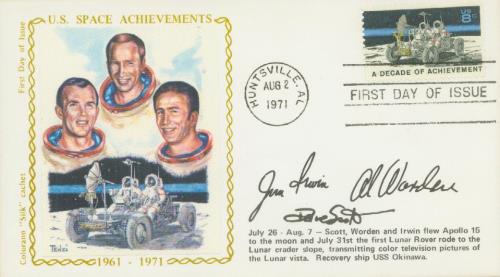 US #1435 – Silk First Day Cover picturing the astronauts of the Apollo 15 mission. Click image to order.

Apollo 15 launched from the Kennedy Space Center at Merritt Island, Florida on July 26, 1971, at 9:34 a.m.  The Falcon landing module touched down on the Moon four days later on July 30.   After a few hours of sleep, David Scott and James Irwin became the seventh and eighth humans to walk on the moon.  They then set up the lunar rover and became the first humans to drive on the moon. 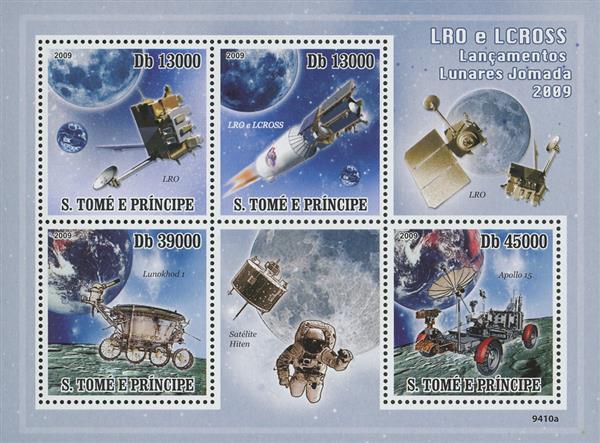 Between July 31 and August 2, Scott and Irwin traveled 15.7 miles on the moon’s surface (more than the 4.2 miles covered by all previous expeditions on foot).  They also collected about 170 pounds of lunar material to bring back to earth for examination.  On August 2, Scott also used a special kit from the USPS to cancel a First Day Cover bearing the two stamps that were being released on Earth that same day.  Scott also completed an experiment where he dropped a feather and a hammer to show Galileo’s theory that objects in a gravity field would fall at the same rate without air resistance.  The feather and hammer landed at the same time, demonstrating the theory.

The Apollo 15 crew also left a small statue and plaque on the moon’s surface honoring the 14 American and Soviet astronauts who had died while carrying out space missions.  The crew successfully returned to Earth on August 7.  But a scandal soon cast a shadow of the otherwise successful mission.

It turned out that the Apollo 15 astronauts had agreed to take about 400 unauthorized postal covers to the Moon.  They had worked out a deal with a German stamp dealer to have the covers created, they would carry them to the moon, and receive about $7,000 each.  The covers were postmarked on the morning of July 26 just before the launch.  They then accompanied the crew to the Moon’s surface and received another postmark on August 7 after they splashed down.

NASA learned of the situation in late 1971, and warned the astronauts not to further capitalize on their mission in this way.  They were also removed as backup crewmembers for Apollo 17.  By this time, they had refused compensation for the covers, but the damage had been done.  The story was released to the news and other astronauts stated that they shouldn’t receive personal profits from their NASA missions.  In 1983, one of the astronauts sued to get all the covers returned and won.  One of the covers later sold for $50,000 in 2014.  Click here to view one of the covers.

For those interested in the inner workings of the rovers, you can read the owner’s manual here.

Click here to see a NASA video about the Apollo 15 mission.