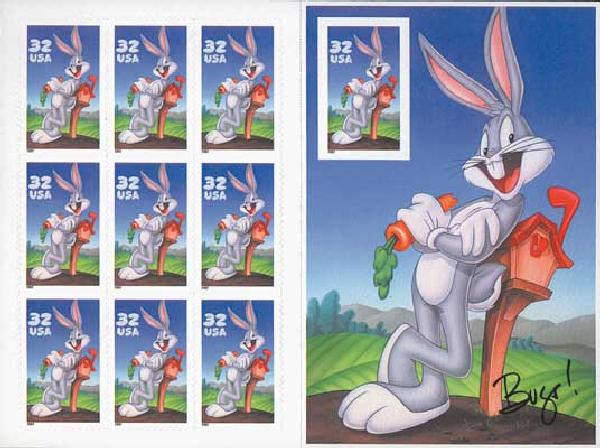 Earlier versions of an animated rabbit had been used in cartoons during the late 1930s that were directed by Ben “Bugs” Hardaway and Cal Dalton. One day, designer Charlie Thorson labeled one of the drawings “Bugs’ bunny” (after the cartoon’s director) and the name stuck.

With the new name and some tweaks to his appearance, the new Bugs Bunny first appeared in the 1940 Tex Avery Short, A Wild Hare. In it, Bugs and his rival, hunter Elmer Fudd, have their first of many similar exchanges, beginning with Bugs’ famous line. The cartoon also gave Bugs his signature voice, thanks to the acting talents of Mel Blanc, who’d go on to voice most of Warner Brothers’ most famous characters.

Bugs went on to become an ambassador for Stampers to spread the joy of collecting to children with this stamp sheet in 1997.

Click here to add this sheet – and its history – to your collection.