US #1136 was issued on the sixth anniversary of Reuter’s death.

The mayor of West Berlin, Ernst Rudolph Johannes Reuter, was born on July 29, 1889, in Apenrade, Kingdom of Prussia, German Empire.

Reuter spent his childhood in Leer, where a public square was later named after him.  He went on to study at colleges in Münster and Marburg. 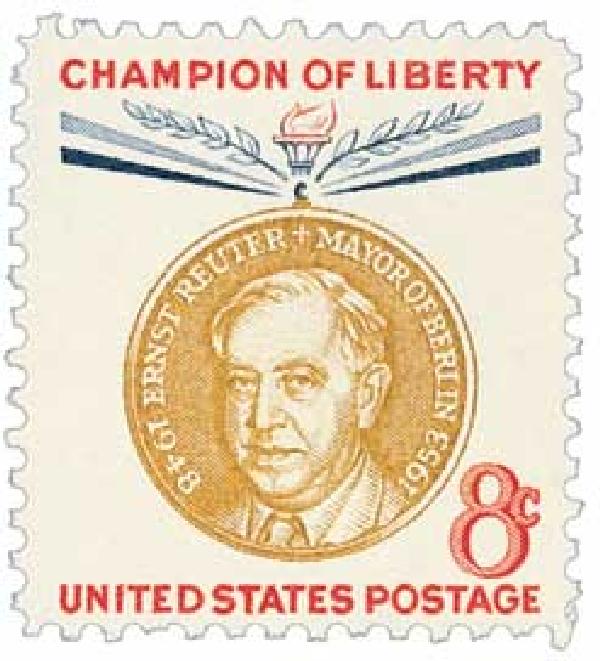 US #1137 paid the international rate.

When World War I began, Reuter opposed Kaiser Wilhelm’s regime, but was drafted into the army.  The Russians later captured him during the Bolshevik Revolution.  While held captive, he decided to join the Bolsheviks and convinced his fellow prisoners to join as well.

After returning home to Germany, Reuter was made the first secretary of the Berlin section of the Communist Party of Germany.  Then, in 1921, he endorsed a rebellion in central Germany that put him in direct opposition to the party’s leader.  He was then expelled and briefly joined the Independent Social Democratic Party of Germany before rejoining to the Social Democrats. 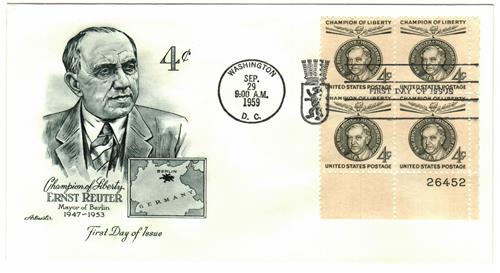 Reuter entered into government service in 1926, contributing to transportation reforms.  He helped found Berlin’s main public transportation company and expanded the city’s subway system.  Reuter then served as mayor of Magdeburg from 1931 to 1933 and was elected to the Reichstag.  He resigned in 1933 as the Nazis rose to power and was sent to a concentration camp.  After being released, he fled to Turkey where he worked as a professor. 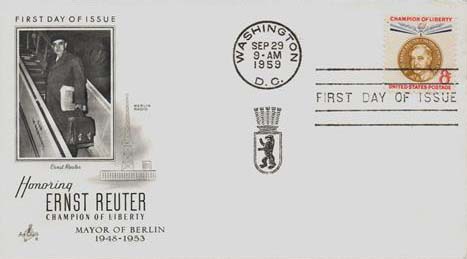 Following the end of World War II, Reuter returned to Berlin and was elected to the Magistrate, where he oversaw the Transportation Department.  Then, in 1947, he was elected mayor of Berlin, but the Soviets refused to confirm his election.  Reuter refused to abandon his post though, going so far as to carry business cards that read “Ernest Reuter, the Elected but Unconfirmed Lord Mayor of Berlin.”  He also spoke out publicly, declaring that they would never give in to the Soviets. 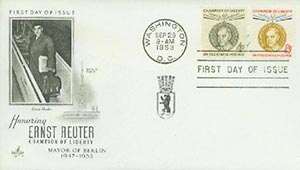 By June 1948, the Soviets had blocked all of the Western land and water supply routes.  Food supplies were already low and many people turned to boiled roots for food.  Reuter then worked with American Military Governor Lucius D. Clay to organize the Berlin airlift.  Over the course of 15 months, the airlift would bring in more than two million tons of food and coal.  To support the airlift, they built a new airport.  Reuter led his people through these challenging times and encouraged them to make “all necessary sacrifices.” 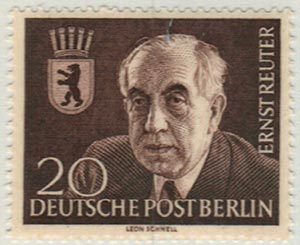 In September 1948, a communist mob descended on City Hall, leading Reuter to stage his own counter demonstration.  He promised, “Today no diplomat or general will speak or negotiate.  Today the people of Berlin will make their voice heard.  People of America, England, France, Italy – look at this city.  You cannot abandon this city and its people. You should not abandon it.”  His impassioned pleas helped maintain outside support as well as embolden the resolve of the people of Berlin.  He also showed the unity of West Berlin when he formed a grand coalition with two other parties.  For his leadership, he was honored on the cover of Time magazine, making him the second postwar-German politician to receive that honor. 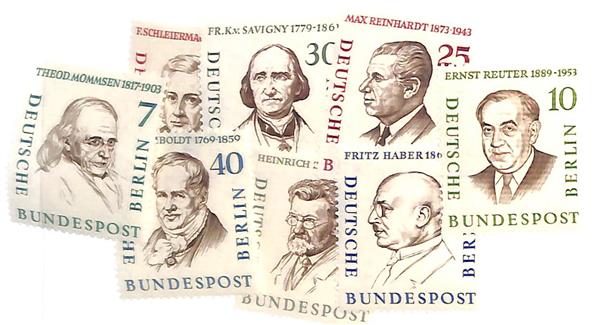 The blockade finally ended in May 1949.  Reuter thanked Clay, saying the people of Berlin would never forget what he had done for them.  Reuter was reelected in 1951 and continued to refuse to work with the communists.  He helped found the Free University of Berlin, as well as the Mayor Reuter Foundation, which provided assistance to refugees entering West Berlin.  Reuter suffered a heart attack and died on September 29, 1953.  More than one million people attended his funeral.  A number of streets and buildings have been named in his honor, as well as an award given by the city of Berlin.