Emancipation Day in the Virgin Islands 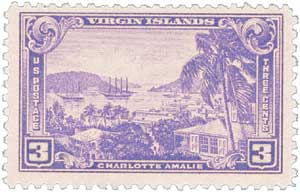 US #802 pictures Charlotte Amalie Harbor on the island of St. Thomas.

The Virgin Islands are part of the Lesser Antilles island chain and the Leeward Islands group in the Caribbean Sea, located just east of Puerto Rico.  They include more than 50 islands, but the largest are St. Thomas, St. John Island, and St. Croix. 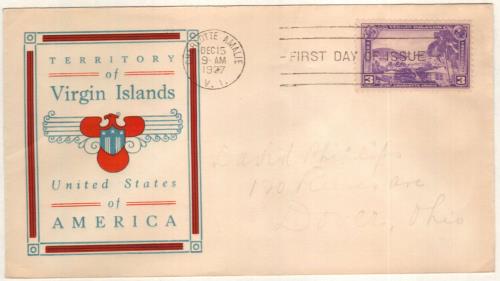 The Ciboney tribe initially inhabited the islands, but the Arawak later drove them out.  The Caribs, who were a much fiercer tribe, in turn, displaced the Arawak. Christopher Columbus reached the Virgin Islands in 1493 after he was blown off course during his second voyage of exploration. He landed on St. Croix but decided not to stay.  Columbus kidnapped six Arawak natives to act as guides.  The numerous small islands and reefs reminded him of St. Ursula and her 11,000 Virgins – a legend based on a 4th-or 5th-century martyr.  Columbus named the area the Virgin Islands. 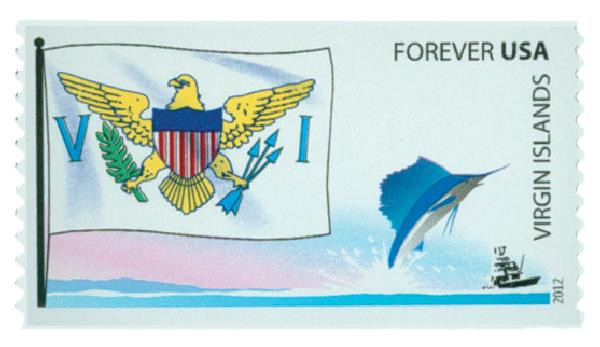 The Spanish easily conquered the Caribs, but finding little gold in the islands, didn’t establish permanent settlements.  As trade and shipping increased in the region, other European nations became interested in the Virgin Islands.  Over the years, Denmark, Britain, Spain, and France fought over the land.  Eventually, in 1733, France sold the island to the Danish West Indies Company. 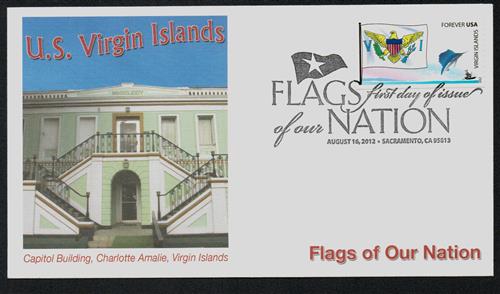 Sugar cane became the prime crop in the Virgin Islands, as conditions for growing it were nearly perfect.  The profits from this industry led to an increased demand for labor.  By 1672, Denmark was importing African slaves to work on the plantations.  A slave-trading outpost was established in 1685, and the slave population soon greatly outnumbered the Europeans. Slaves on St. John led a successful revolt in 1733 and took control of the island for six months before Denmark was able to get it back – with the assistance of French forces. 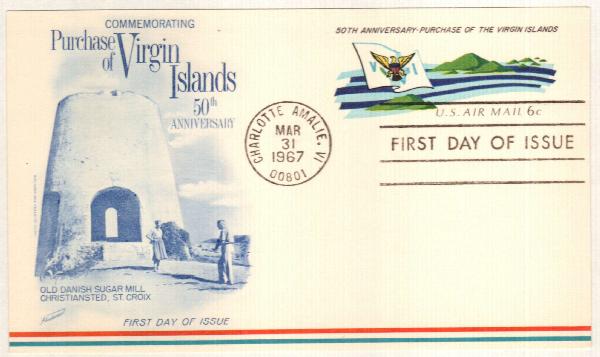 US #UXC6 – Postal card issued for the 50th anniversary of America’s purchase of the Virgin Islands.

In 1847, Danish governor Peter von Scholten laid out a 12-year plan to emancipate the slaves.  Plantation owners opposed the plan, and slaves didn’t want to wait that long.  On the morning of July 3, 1848, a large group of slaves in Frederiksted stormed Fort Frederik and demanded that they all be declared free by noon or they would burn down the town.  Von Scholten wasn’t in his office at the time, but upon receiving the word, agreed and made the announcement at 3 pm.  He declared, “all unfree in the Danish West Indies are from today emancipated.”  Some 5,000 slaved were freed, but many plantation owners refused and about 17,000 people remained enslaved. 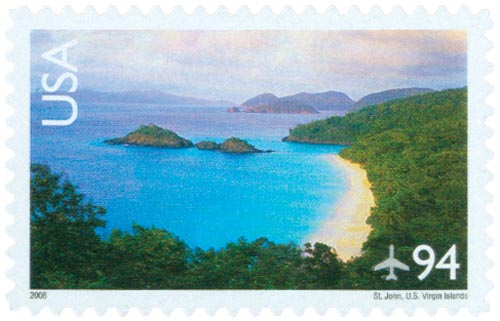 The King of Denmark was not pleased with von Scholten’s declaration and had him imprisoned.  Restrictive laws were put in place to limit the freed slaves, and unhappiness grew.  Both laborers and owners started to abandon the sugar plantations that had been the foundation of commerce.  The soil wasn’t able to sustain the heavy farming that had been going on, and with the labor force depleted, the economy of the islands started to collapse.  Though it would be some time before all slaves were truly free, July 3 would later come to be known as Emancipation Day, an official holiday in the US Virgin Islands. 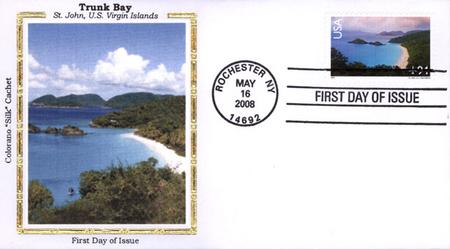 In 1867, the United States wanted to purchase St. Thomas and St. John.  A price of $7.5 million was agreed upon, but the deal fell through.  Another attempt was made in 1902 but also failed. Finally, during World War I, American concerns grew that Germany would try to take over the Danish territories in the region.  Denmark was badly in need of money due to the war, and in 1917 sold all three islands to the US for $25 million.  The name was changed from the Danish West Indies to the US Virgin Islands. 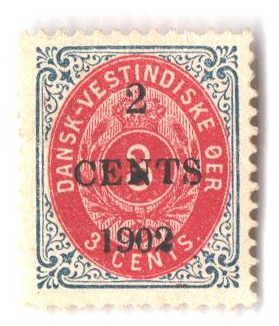 Under American authority, industrialization started replacing the failed sugar farms.  In turn, their land was allowed to recover and rum distillation again became a thriving business.  Very little of St. Thomas’ economy was based on farming, while St. Croix remained almost completely plantation-dominated.  Additionally, tourism now makes up 80% of the territory’s economy, and Charlotte Amalie is one of the most popular cruise ship destinations in the West Indies.