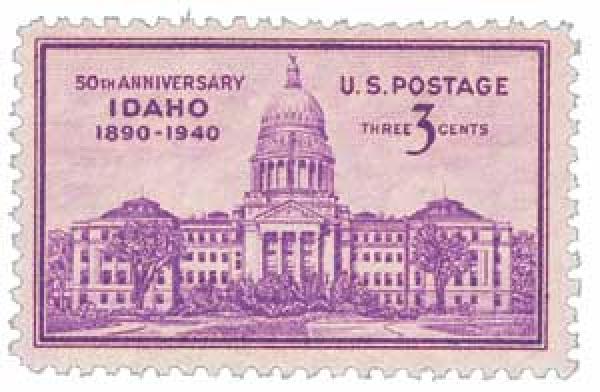 Experts believe American Indians lived in the Idaho region more than 10,000 years ago. Idaho tribes included the Coeur d’Alene, Pend d’Oreille, Kutenai, Paiute, and Bannock. However, the largest tribes were the Nez Percé and Shoshone.

In 1805, members of an expedition, led by the explorers Meriwether Lewis and William Clark, became the first Europeans to reach Idaho. They crossed the Bitterroot Mountains, where they met Shoshone and Nez Percé Indians. The Indians helped the explorers build canoes, which they floated down the Clearwater and Snake rivers into the Columbia River. 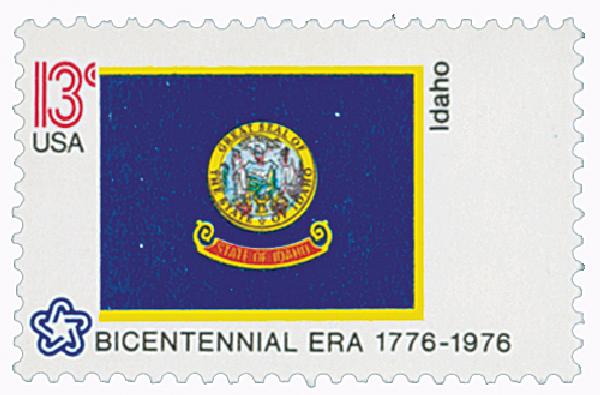 In 1855, a group of Mormons began farming in eastern Idaho. They built Fort Lemhi and the state’s first irrigation projects before they were driven away by Indians. Another group of Mormons arrived in 1860 and established Franklin, Idaho’s first permanent settlement. 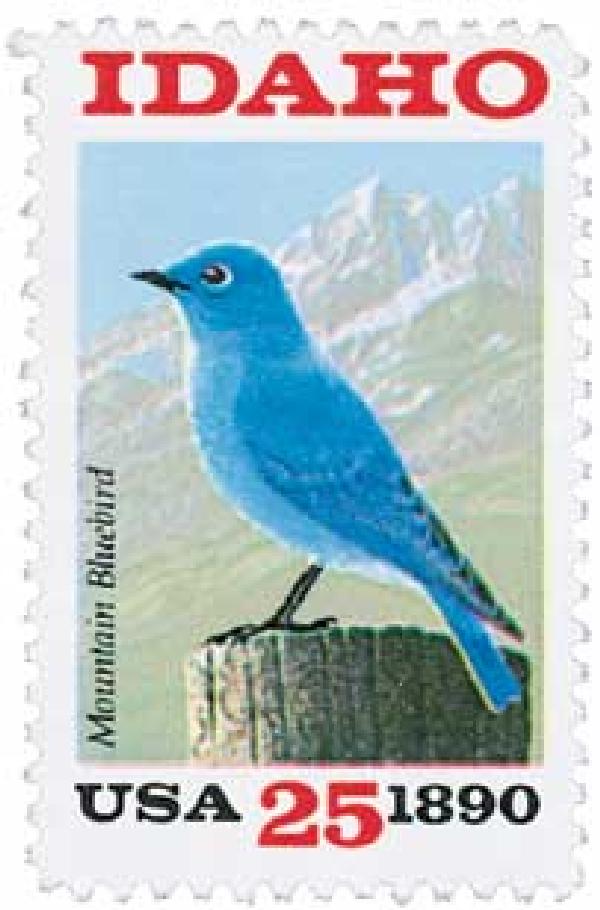 The Idaho Territory was created on March 4, 1863. Lewiston was named the capital. The territory included all of today’s Idaho and Montana, and most of Wyoming. Montana became a separate territory in 1864, and Wyoming followed in 1868. Boise became Idaho’s capital in 1864.

Railroad construction sped the territory’s growth. Mormons brought the Utah Northern Railroad into Franklin in 1874. In 1884, the Oregon Short Line Railroad linked booming silver mines in Hailey and at the Big Wood River with Oregon.

The growing white population led to conflicts with Indians. When the U.S. Army attempted to settle the Nez Percé Indians on the Lapwai Reservation in Idaho, they resisted. On June 17, 1874, they defeated U.S. troops at the battle of White Bird Canyon in north-central Idaho. The Nez Percé soon retreated, and were captured near the Canadian border. 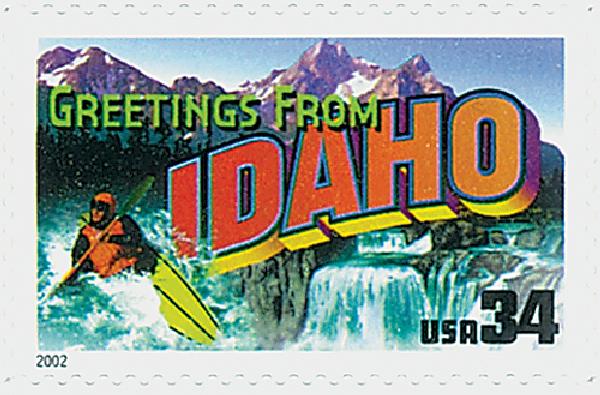 U.S. #3572 pictures a kayaker, Shoshone Falls, the Snake River, and the Sawtooth Mountains.

Suffering from a lack of food, the Bannock Indians left their reservation in 1878. They attempted to dig camas roots on the Prairie, but white settlers claimed this land for their cattle-grazing ground. Fighting ensued, and the Bannock leader, Chief Buffalo Horn, was killed. The Bannock then broke into smaller groups, which were eventually captured.

On July 3, 1890, Idaho achieved statehood. The state’s first major challenge came quickly, when disputes between union and nonunion miners, as well as mine owners, erupted into violence during the 1890s. The union miners were members of the Western Federation of Miners, the chief union in the Industrial Workers of the World, a radical labor organization. In 1892, the Coeur d’Alene region became particularly violent. Union miners fought nonunion miners and mine owners with dynamite and guns. The situation degenerated again in 1899. Idaho governor Frank Steunenberg was forced to declare martial law and called for federal troops.

In the early 1900s, Idaho’s farms benefited greatly from irrigation projects. The Twin Falls Land and Water Company began diverting enough water from Snake River to irrigate 60,000 acres of land in 1905. The U.S. Bureau of Reclamation completed the Minidoka Dam on the Snake River in 1906. This project supplied 100,000 acres of land with water. 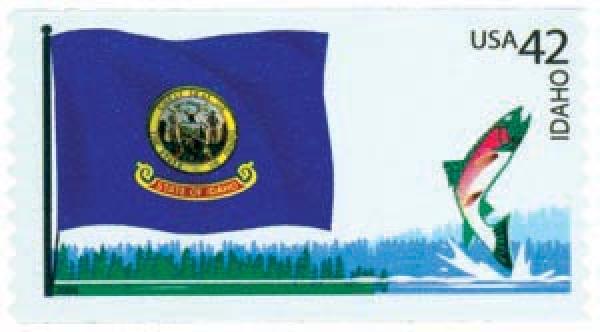 Like most of the U.S., Idaho’s economy was strong during World War I, failed during the Great Depression, and then boomed again during World War II. During the depression, The Civilian Conservation Corps did a great deal to preserve the state’s forests. And it was during the 1930s that a paved highway connecting the northern and southern portions of the state was completed. During WWII, Idaho’s factories produced airplanes, arms, and other important military supplies.

After WWII, Idaho’s economy began to change. Agriculture became less important, and food processing and manufacturing became more profitable. The housing boom that followed the war provided a great boost to the lumber industry. New technologies and efficiencies in the lumber industry made profits from what were formerly waste products. Sawdust and wood chips were used to make paper containers, plywood, and wood pulp.

Idaho’s farms began to decrease in number, but increase in size. Farm machinery increased productivity, but decreased employment. More and more people began moving to cities in search of new ways to make a living. This change was quite rapid. In 1940, about one third of Idaho’s citizens lived in cities. By 1960, more than half lived in urban areas. 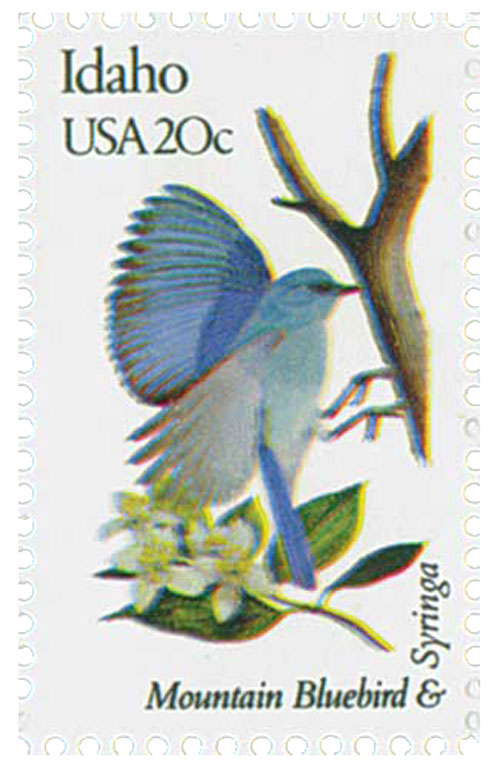 U.S. #1964 pictures the state bird and flower – the mountain bluebird and syringa.

The Atomic Energy Commission built the National Reactor Testing Station (since renamed the Idaho National Engineering Laboratory) near Idaho Falls in 1949. In December 1951, this facility generated electricity with nuclear energy for the first time in history. The town of Arco became the first in the world to have all of its electricity supplied by nuclear reactor. The station supplied all the power to Arco for one hour on July 17, 1955.

To support the state’s increasing energy needs, three hydroelectric dams began being built on the Snake River in 1955. The Brownlee Dam was completed in 1959, the Oxbow in 1961, and the Hells Canyon Dam in 1968.

Between 1970 and 1980, Idaho’s population grew by 32 percent. This put a heavy strain on the state’s infrastructure. New schools, housing, roads, and sewage systems were built to accommodate the larger population. Agriculture remains an important part of the economy, but now, tourism, construction, food processing, and manufacturing all play a major role in the state’s economic health.