The history of the National Postal Museum dates back to 1886.  That year, the National Philatelic Collection was first established with the donation of a sheet of 10¢ Confederate stamps.  In the coming years, individuals, foreign governments, and American government agencies helped the collection grow through donations.  Today it consists of more than 5.9 million items.

Between 1908 and 1963, the National Philatelic Collection resided in the Smithsonian’s Arts and Industries Building on the National Mall.  Then, in 1964, it was moved to the National Museum of American History. 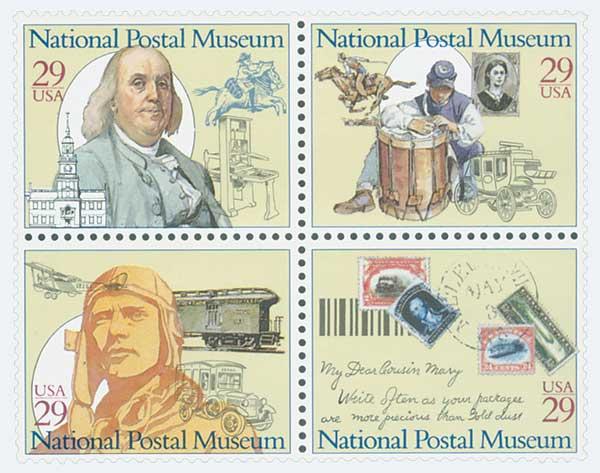 US #2779-82 pictures important figures from our postal history as well as items that can be found at the museum.

Realizing the need for a permanent home for the National Philatelic Collection, the National Postal Museum was established on November 6, 1990 as a joint project between the Smithsonian Institution and the USPS.  The former City Post Office Building, built in 1914, was selected as the site for the new museum. 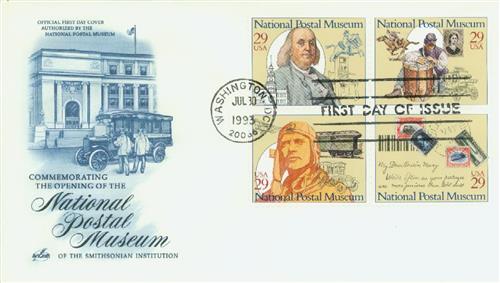 The National Postal Museum officially opened to the public on July 30, 1993.  Some 10,000 people visited the museum during that opening weekend.  Four new stamps were issued there on opening day to commemorate the event.  These stamps were a joint effort between the USPS, the National Postal Museum, and the Citizen Stamp Advisory Committee.  The museum director at the time said these “stamps were in effect like a miniature visit to the museum” because they picture several items that can be found there. 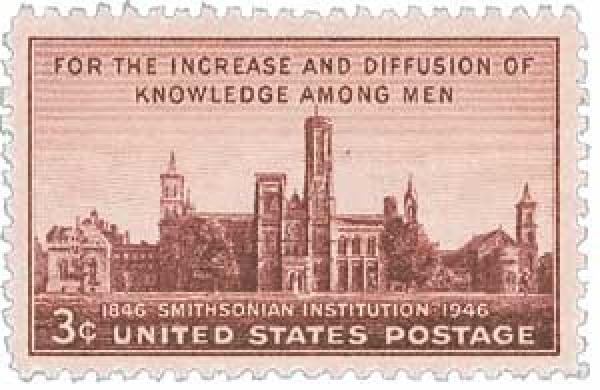 US #943 was issued for the 100th anniversary of the Smithsonian Institution.

The National Postal Museum is home to one of the world’s largest and most comprehensive stamp collections.  Fascinating interactive exhibits tell the colorful history of the nation’s mail service.  Collections include postal stationary and postal history from before the first stamps were issued, vehicles that transported the mail, mailboxes, meters, greeting cards, Owney the postal dog, and lots more. 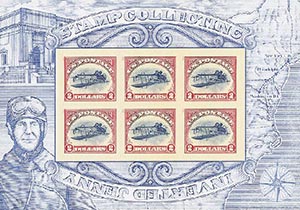 In 1997, the National Postal Museum hosted an inaugural ball for Vice President Al Gore.  That same year, it received full status as a Smithsonian Institution National Museum.  Then, in 2013, the National Postal Museum opened the world’s largest stamp gallery – the William H. Gross Stamp Gallery, named for its main benefactor.  The 12,000-square-foot facility houses some of the greatest stamp rarities and is a mecca for collectors around the world.