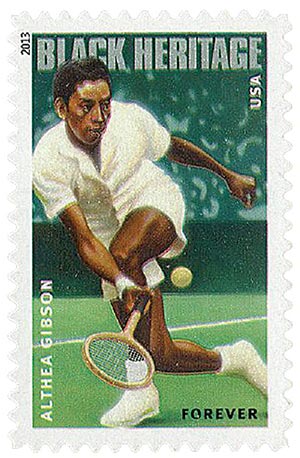 Althea Gibson began playing tennis as a teenager and won her first tournament when she was 15. She achieved great success, including 10 consecutive wins at the American Tennis Association singles tournament. However for many years she was barred from competing in her sport’s top events due to her race. When a fellow tennis star, Alice Marble, wrote an open letter to protest this, Gibson was permitted to compete in the U.S. Open.

Gibson then became an international star after winning the singles title at the French Open, making her the first African American to do so. The following year, on July 6, 1957, Gibson won the Tennis Championships at Wimbledon – the oldest and often considered the most prestigious of all tennis championships. She was again the first African American to achieve that high honor. 1957 was a good year for Gibson – she went on to win the U.S. Open and was selected by the Associated Press as Female Athlete of the Year.