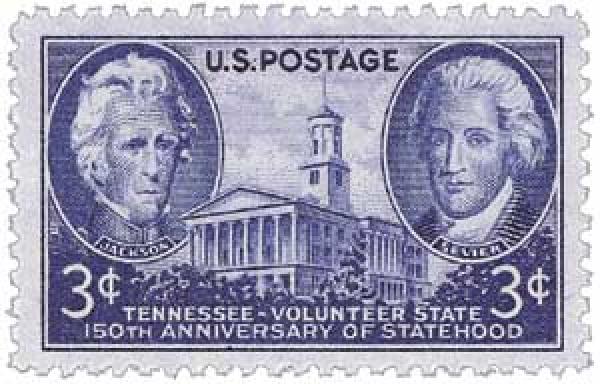 The first known groups of Indians to live in Tennessee were the Mound Builders, who moved to the region about 1,000 years ago. They used mounds for burial places, as platforms for temples, and for the homes of chiefs. Many of these mounds are gigantic, and they were built without the aid of horses and oxen. Some of the mounds resemble animals when viewed from high above, and some mounds are shaped geometrically. Cherokee and Chickasaw Indians lived in the region when Europeans arrived.

A party of Spanish explorers led by Hernando de Soto raided some Indian villages in the Tennessee River valley in 1540. The party continued westward, and in 1541, de Soto became the first European to reach the Mississippi River. In 1673, the English explorers James Needham and Gabriel Arthur explored the Tennessee valley, and Louis Jolliet of Canada and Father Jacques Marquette of France sailed down the Mississippi River. 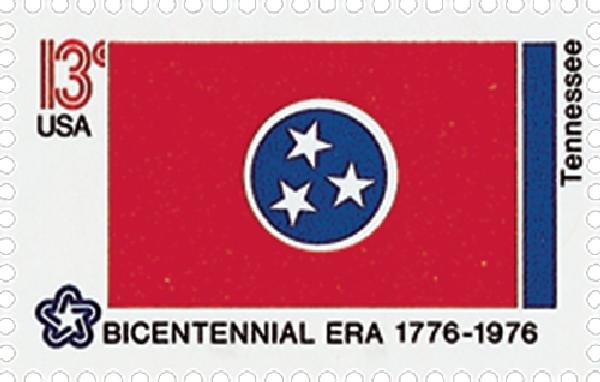 U.S. #1648 – The three stars on the Tennessee flag represent the state’s mountains, highlands, and lowlands.

However, it wasn’t until 1682 that René-Robert Cavelier, Sieur de la Salle, claimed the Mississippi region, which includes Tennessee, in the name of France. To protect the claim, Cavalier built Fort Prud’homme on the Chickasaw Bluffs. The site was so isolated that it was soon abandoned. French settlers began moving to the Mississippi Valley and called the area New France. In 1714, Charles Charleville set up a French trading post at French Lick, near what is now Nashville, Tennessee.

The French, Spanish, and English all claimed Tennessee and competed for trade with the Indians. Spain eventually gave up on its claims, but Britain and France developed a fierce rivalry. In 1754, the French and Indian War began between French and British settlers. Although the French were outnumbered 20 to 1, they held the upper hand in the early years of the conflict. But after nine years of fierce fighting, the British were victorious. In 1763, the French surrendered all of their claims east of the Mississippi to the British. 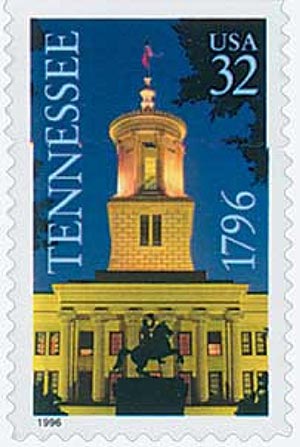 U.S. #3071 pictures the State Capitol building with a statue of Andrew Jackson in front.

With the conclusion of the French and Indian War, English settlers from Virginia and North Carolina began moving to Tennessee. In fact, the area was governed as part of the colony of North Carolina. However, due to its isolation from the rest of colony – because of the Appalachian, Great Smokey, and Blue Ridge Mountains – it often had little involvement with North Carolina. In 1772, settlers in the area established their own government, the Watauga Association. This government created one of the first written constitutions in North America.

The Transylvania Company bought a large portion of present-day Tennessee and Kentucky from the Cherokee Indians in 1755. The legendary frontiersman Daniel Boone blazed the famous Wilderness Road through the Cumberland Gap, opening this vast territory for new settlement. Boone and about 30 other woodsmen created the road by improving various Indian trails and buffalo paths. 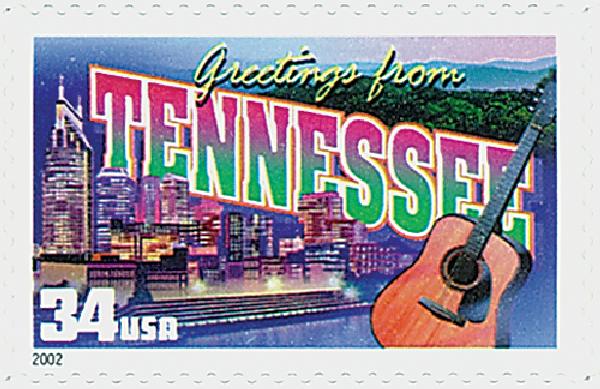 U.S. #3602 honors Tennessee as the home of country music with an acoustic guitar. It also pictures the Nashville skyline, the Cumberland River, and the Great Smoky Mountains.

In 1779, James Robertson and John Donelson led settlers to Big Salt Lick on the Cumberland River. They built Fort Nashborough, which later became Nashville. This fort became the center of the Middle Tennessee settlements.

During the American Revolution, pioneers from Tennessee, under the leadership of John Sevier, were a major factor in the victory over the British at the Battle of Kings Mountain, South Carolina, on October 7, 1780.

Conflicts between settlers and Indians increased in Tennessee. In 1784, when North Carolina failed to send aid to the settlers, three counties revolted and formed the State of Franklin. North Carolina regained control of these counties in 1788, but, in 1789, gave ownership of all of Tennessee to the United States. The U.S. named this area The Territory of the United States South of the River Ohio.

On February 6, 1796, the territory adopted a constitution in preparation for statehood. On June 1, 1796, Tennessee became the 16th state to enter the Union. It was the first state to be created out of government territory. 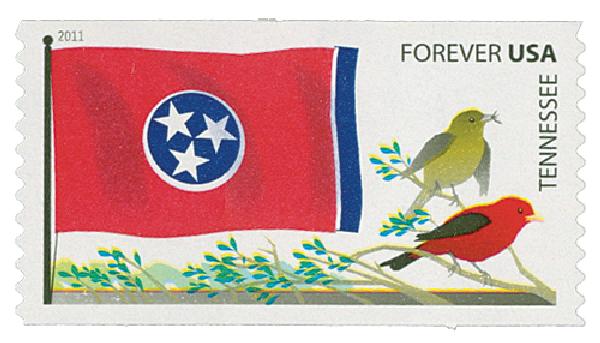 U.S. #4322 pictures the Tennessee state flag and a pair of scarlet tanagers.

Three men, who would later become presidents, played key roles in creating the new state: Andrew Jackson, James K. Polk, and Andrew Johnson. Jackson helped write the state’s first constitution, served as a political and military leader, and served as a Tennessee Supreme Court judge. Polk also was an important political leader and served as governor of the state. A political leader, Johnson worked hard for the poor and struggled to keep his state in the Union during the Civil War.

Tennessee was the last state to secede from the Union. Many Civil War battles were fought in the state. One of the bloodiest battles of the entire war, the Battle of Shiloh, was fought near the Tennessee River near Pittsburg Landing. The Battle of Shiloh was an important victory for the Union. Control of the city of Chattanooga was highly contested during the war, with possession switching several times. Through the leadership of Andrew Johnson, Tennessee became the first Confederate state to re-join the Union. 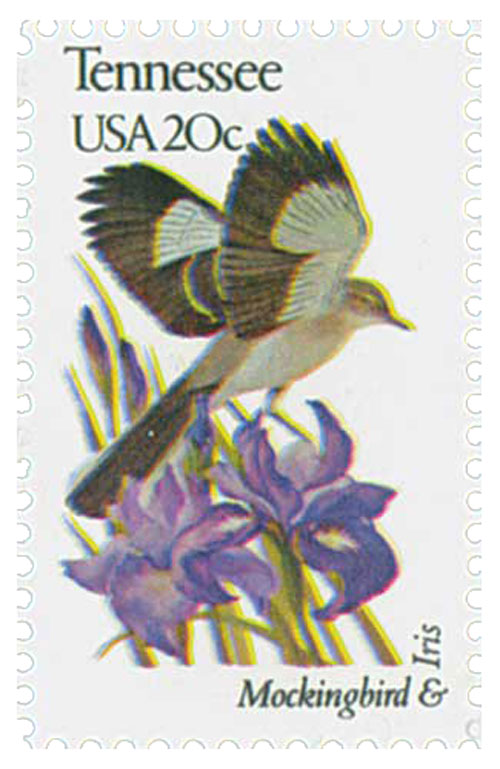 U.S. #1994 pictures the state bird and flower – the mockingbird and iris.

The Civil War had left much of Tennessee destroyed. However, over time the state began to rebuild its economy and infrastructure. Many of the state’s large plantations were divided into smaller farms. Without slaves, the farmers were no longer able to make their cotton crops as profitable. It took about 40 years for the state’s agricultural industry to recover from the war.

During the early 1900s, the state greatly increased its highways and railroads, paving the way for industrial development. By the mid-1930s, manufacturing had overtaken farming as the state’s leading industry. In 1933, the government established the Tennessee Valley Authority, or TVA, to conserve and develop the resources of the Tennessee Valley, which includes parts of Tennessee, Kentucky, Virginia, North Carolina, Georgia, Alabama, and Mississippi.

In recent years, the state has concentrated on developing its tourism industry. Tennessee has become known as a leader in educational reform. The state government has also done a great deal to broaden the base of its economy by attracting new industries.