On June 13, 1974, the U.S. issued its first stamps in a diamond shape, honoring our Mineral Heritage.

The idea for the Mineral Heritage stamps came from rock enthusiast Lillian Scheffers Turner. She first discovered her love of minerals at a 1961 gem and mineral show where she saw “nature in the rough” and became “a rock hound.”

Three years later, Turner was in charge of special events at a national gem and mineral show in Washington. While there, someone asked “Why don’t we have a mineral stamp?” That simple question inspired her to launch a 10-year campaign to get America’s first mineral stamps created. 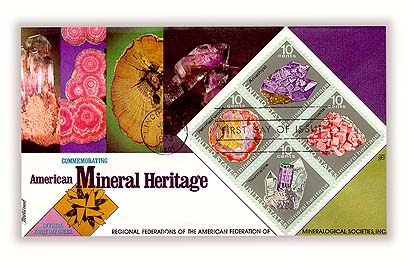 Over the next 10 years, Turner became well known around Capitol Hill, where she received support for her idea. She also typed up countless letters to postal officials, which ultimately paid off. Eventually the Postal Service agreed to produce the stamps and worked with the Smithsonian’s Hall of Geology, Gems, and Minerals to find bright and colorful minerals that would really stand out on stamps. Turner also informed them one of their initial choices had to be removed because it wasn’t a mineral that could be found in the United States. 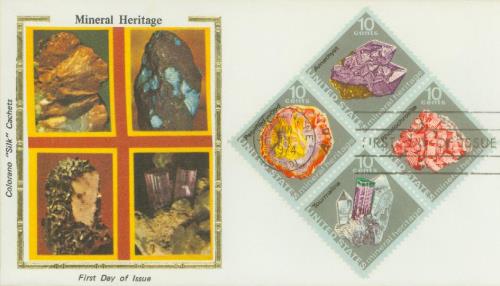 These exciting new diamond-shaped stamps, the first in U.S. history, were then issued on June 13, 1974 at the National Gem and Mineral Show in Lincoln, Nebraska. The stamps pictured petrified wood from the Petrified Forest in Arizona, tourmaline from San Diego County, California, rhodochrosite from the Sweet Home Mine in Colorado, and amethyst from Due West, South Carolina. The Mineral Heritage stamps were voted the most popular of all the stamps issued that year. 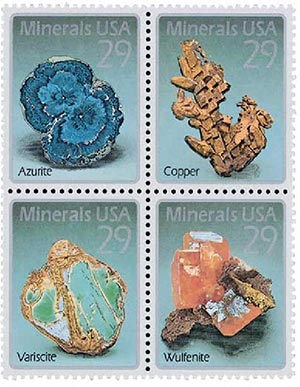 Not long after these stamps were issued, Turner insisted that the U.S. needed to issue more mineral stamps and launched a new campaign. Eighteen years later she succeeded and the USPS issued its second set of mineral stamps in 1992.