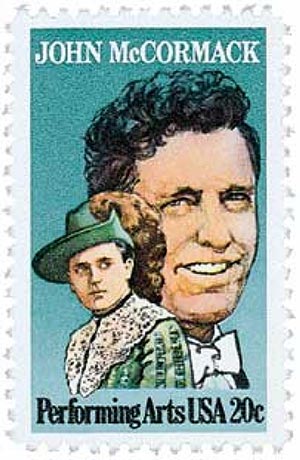 The fourth of eleven children, McCormack sang in his church choir as a child.  It was while singing in the choir at St. Mary’s Pro-Cathedral in Dublin that he was first discovered.

In 1903, McCormack won the gold medal of the Dublin Feis Ceoil music competition.  Many people in his community believed in his singing abilities and raised money to send him to Italy in 1905 to receive voice training from Vincenzo Sabatini.  McCormack’s voice was naturally tuned, so most of his lessons focused on controlling his breathing, which would be crucial to his career as a singer.

McCormack had his operatic debut at the Teatro Chiabrera in Savona in 1906.  The following year he began performing in the opera Cavalleria Rusticana, in London, where he was the Covent Garden’s youngest principal tenor at age 22. 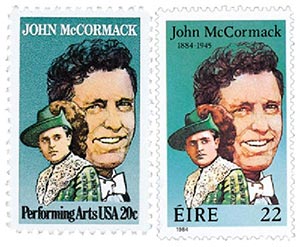 Item #M1044A – Get both the US and Ireland joint-issue stamps in one order.

In 1909, McCormack began performing in America and in 1911 in Australia.  While he continued to perform operas until 1923, he began to do more concerts in the 1910s, becoming the most celebrated lyric tenor of the day.  He became famous for his breath control and he was able to sing 64 notes in one breath from Mozart’s “Il Mio Tesoro” from Don Giovanni. 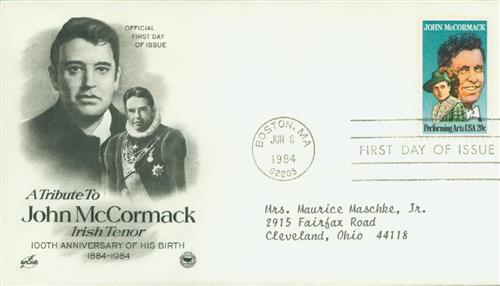 During this time McCormack also made hundreds of recordings and sang on the radio.  He was one of the first singers to record “I Hear You Calling Me” and the first to record the World War I song “It’s a Long Way to Tipperary.”  He also appeared in two films – Song o’ My Heart and Wings of the Morning. 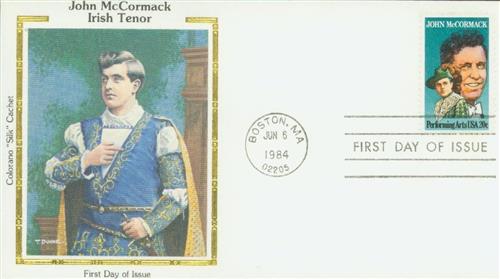 McCormack became a US citizen in 1917.  The following year, he donated over $11,000 to the war effort.  He also sold Liberty bonds in McCreery’s department store in New York City and around the country.  McCormack agreed to autograph one of his records for each person who bought $100 in bonds.  If someone purchased $1,000 in bonds, McCormack sang a song chosen by that person. 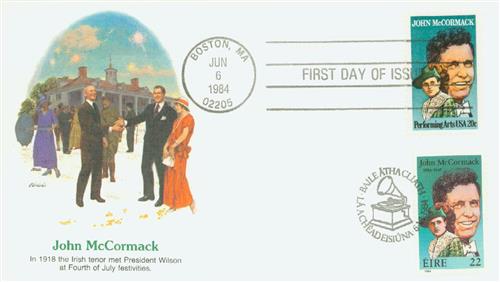 McCormack embarked on his farewell tour in 1937, with his final performance in London in 1938.  However, the following year he returned to performing to raise money for the Red Cross and the war effort.  He toured, put on concerts, and released recordings to raise money.  However, by 1943 he was in poor health and had to retire for good.  Suffering from emphysema, he spent his final years in a home by the sea in Dublin before his death on September 16, 1945.

McCormack received a number of honors during his lifetime, included the title of Papal Count for his work with Catholic Charities.  He also received three papal knighthoods.  In 2008, a life-size statue of McCormack was placed in the Iveagh Gardens, near the National Concert Hall in Dublin.  He has also been honored in his hometown of Athlone with a statue and a performance hall at the Athlone Institute of Technology.

Click here to listen to some of McCormack’s recordings.