In the presidential election of 1932, Democratic nominee Franklin D. Roosevelt promised a “new deal” for the “forgotten man.” Reacting to the ineffectiveness of the Hoover administration in meeting people’s needs during the Great Depression, Americans overwhelmingly voted in favor of this promise.

One of Roosevelt’s first moves after taking office was convincing Congress to pass his National Recovery Act. The act was a direct result of the general business decline during the Great Depression. Roosevelt and his advisors blamed part of the cause of the Depression on unrestrained competition. Leading businessmen and trade associations were called upon to draft the specifics of the plan, which focused on fair trade and labor practices. It was first introduced to the House on May 17. After passing the House and Senate on June 10 and June 13, it was signed into law by President Roosevelt on June 16, 1933. 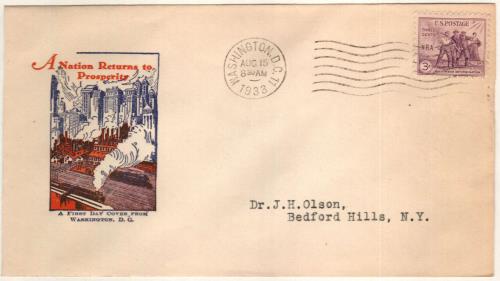 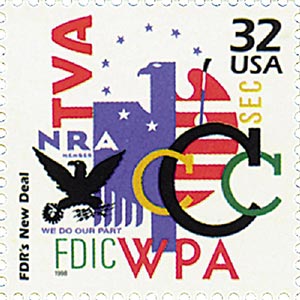 To gain support for the NRA, Roosevelt requested the creation of a new stamp, which he emphasized must be “issued at once to be most effective.” After Roosevelt suggested the stamp, it was produced and placed on sale in just 13 working days.

Roosevelt was pleased with the stamp, which he called “grand.” However, the public was divided. Some remarked on the way the farmer carried his scythe on his left shoulder, which is rarely done by real farmers. Others noticed the characters were walking in step except the businessman, which they interpreted as meaning he wasn’t looking ahead to recovery as the others were. And some pointed out that while four people were portrayed, they only shared 7 legs between them. 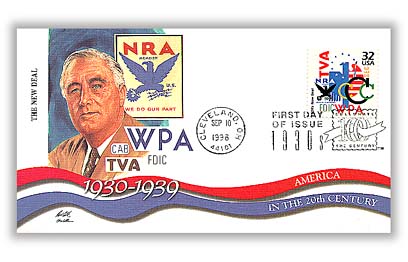 In 1935, the act was found to be unconstitutional by a unanimous Supreme Court decision.

Click here to read the full text of the act.