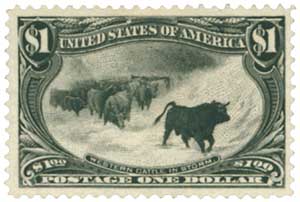 U.S. #292 is widely considered the most beautiful U.S. stamp.

By 1898, the western part of the United States was beginning to flourish. Thousands of wagon trains had passed over its mountains, deserts, and Great Plains; transcontinental railroads now linked the West to the East; and many new states had been added to the Union. To call attention to the development of the land west of the Mississippi River, an international exposition was held in Omaha, Nebraska. 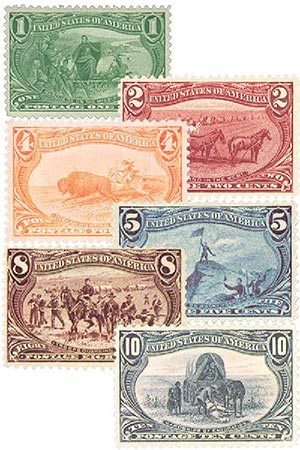 The Trans-Mississippi Exposition was held in Omaha, Nebraska, June 1 through November 1, 1898.   Its goal was to further the progress and development of the resources west of the Mississippi. To promote the event, the Postmaster General authorized a set of nine new stamps. 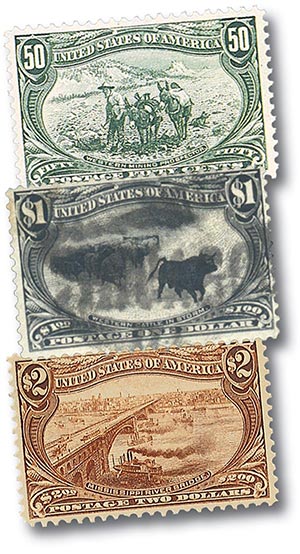 Based on original paintings, photographs, and drawings, the stamps were supposed to be printed in two colors, but the Spanish-American War broke out. Demand for revenue was high, and the Bureau of Engraving and Printing lacked the time and manpower needed to run the two-color press. So the stamps were produced in one color only. Even so, the Trans-Mississippi commemoratives are considered by many to be the most beautiful series ever produced.

Originally, the Post Office Department didn’t plan on issuing 50¢, $1 and $2 stamps because there wasn’t a big demand for such high denominations. But Postmaster General James A. Gary wanted Americans to know about the achievements of the brave, hardworking, self-reliant people who settled the West. These three high-value stamps were produced after the original series and were on sale for only six short months.

However, collectors of the time protested these high-value stamps. Purchasing a complete set of the previously issued Columbian commemoratives had put a dent in many collectors’ pocketbooks. They resented another high-value set being issued, especially since the high-value Columbians were still on sale at post offices. 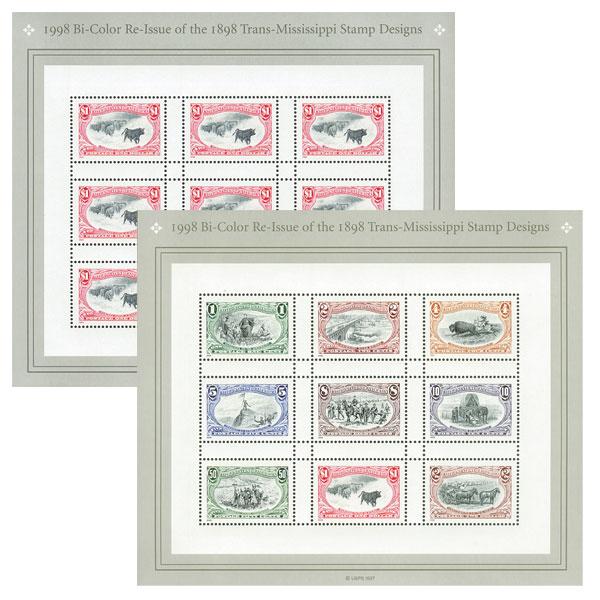 But the Postmaster General proceeded with his plans, stating “No one is compelled to buy the high values unless he wishes to do so.” Though sales were brisk at first, purchases quickly slowed to a trickle. By the end of the year the sales were disappointing, so the Post Office Department recalled and destroyed all the unsold stamps.

A century later, modern collectors got the chance to see how these stamps were supposed to be printed. The USPS used the original bi-color dies to print them in two colors as intended.

Click the images below to find out more about each stamp’s design and the Trans-Mississippi Exposition.

Click here to view scenes from the Trans-Mississippi Expo.