Flagg was a skilled artist from a young age, with his illustrations appearing in national magazines when he was just 12 years old. By the time he was 14 his work appeared in Life magazine.

Flagg went on to attend the Art Students League of New York before studying art in London and Paris. After returning to the U.S. in 1900, Flagg kept busy providing illustrations for many books, magazine covers, political cartoons, and advertisements. Among these works was a comic strip for Judge magazine featuring the character Nervy Nat. At the height of his career, Flagg was the highest paid magazine illustrator in the country. 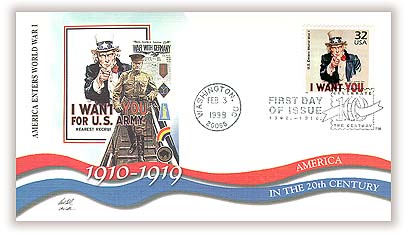 Flagg’s great claim to fame, however, came in 1916 when he reimagined the way we saw Uncle Sam. A popular symbol of America for over a century, Uncle Sam was pictured in a variety of ways – including closely resembling Benjamin Franklin during the Civil War. But in 1916 Flagg illustrated Uncle Sam in a new way – as an elderly man with white hair, goatee, and red, white, and blue top hat. According to Flagg, he didn’t want to bother hiring a model, so instead based Uncle Sam on himself, aging his own features. 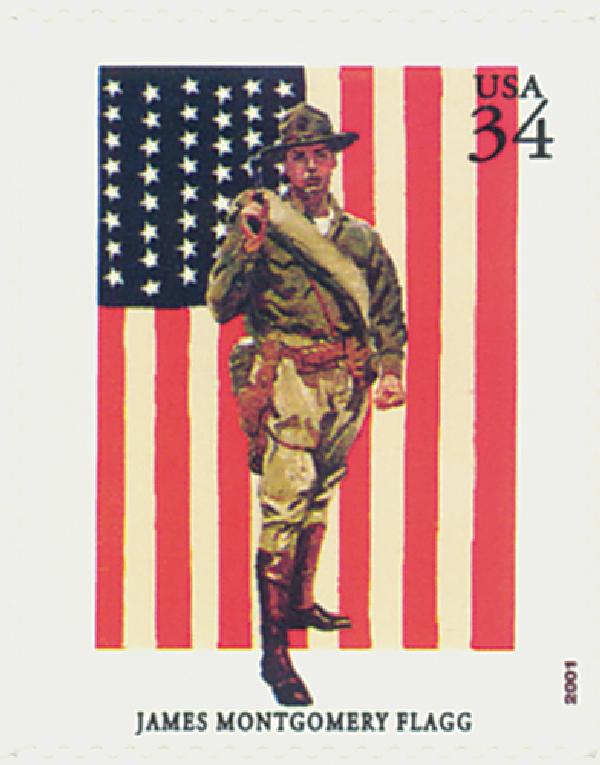 Flagg’s illustration was first shown on the cover of Leslie’s Weekly magazine on July 6, 1916, with the caption “What Are You Doing for Preparedness?” The following year the image was printed on thousands of recruiting posters declaring, “I Want You For U.S. Army.”

The poster became the most famous poster in American history and more than four million copies were printed. It inspired countless young men to join the fight and defend America. The image was so popular it was used again during World War II. Flagg produced more than forty posters for the war effort, often carrying positive messages encouraging recruitment, buying war bonds, national unity, or increasing production. He went on to produce several more powerful posters for World War II.

In addition to his magazine work and posters, Flagg also painted portraits. Among his subjects were Mark Twain, Ethel Barrymore, and Jack Dempsey. 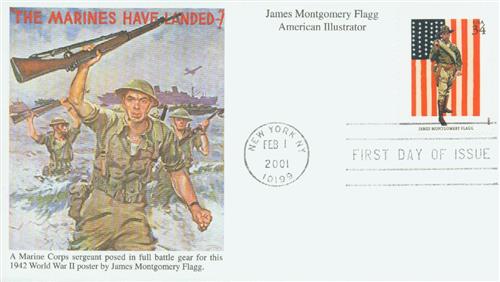 U.S. #3502a FDC includes another Flagg poster on the cachet.