US #3921 – The Shooting Star was the first US Air Force plane to exceed 500 miles per hour in level flight and the first American mass-produced turbojet aircraft.

The flight was planned as part of the 1946 General Electric Air Show.  The air show had been staged to dedicate GE’s new Flight Test Center at the Schenectady County Airport in Glenville, New York.

One of the main goals of the air show was to show Americans how they benefitted from the products GE had built during World War II, and how these aviation products would continue to positively impact their lives in the future.  They also wanted to show how GE was investing in the local community. 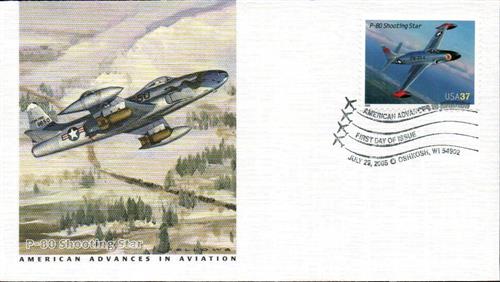 The show opened on June 21.  GE’s president as well as the Assistant Secretary of War and head of the Army’s Air Material Command all gave speeches, as did World War II aviator Jimmy Doolittle.  All of these speeches stressed the importance of air power during peacetime, so that America would always be prepared.  Due to heavy rain, the expected crowd of over 100,000 turned out to be only about 10,000.  However, several national newspapers, radio stations, and camera crews attended the event, helping to spread the air show’s message across the nation. 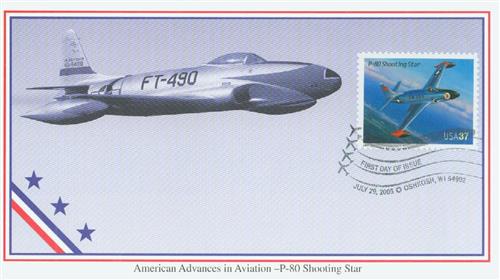 One of the show’s major events was an aerial parade of aircraft that used GE engines or instruments.  The parade flew from New York City to Schenectady and was led by the Lockheed P-80 Shooting Star, America’s first operational jet fighter.  Part of this included the P-80 recreating the first New York Air Show Performance of 1909 in which Wilbur Wright circled the Statue of Liberty.  The P-80 also recreated another famous flight – Glenn Curtiss’ 1910 prize-winning flight from Albany to New York along the Hudson River.  While Curtiss had completed the flight in three hours with two stops for fuel, the P-80 completed it in just 15 minutes. 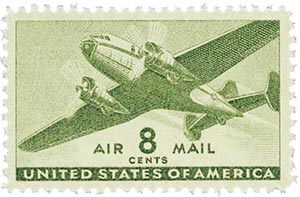 US #C26 – 8¢ stamps such as this were used on the letters flown above the air show.

To help create even more public interest in the event, GE worked with the US Post Office to arrange for the first Airmail delivery by jet-powered aircraft.  A small number of letters would be carried to other cities, while some would be carried aboard a quick jet flight over Schenectady.  After announcing the plans for the flight on June 11, they received such an overwhelming response (over 1,000 letters per day), they increased the total number of letters to be flown over Schenectady to 20,000. 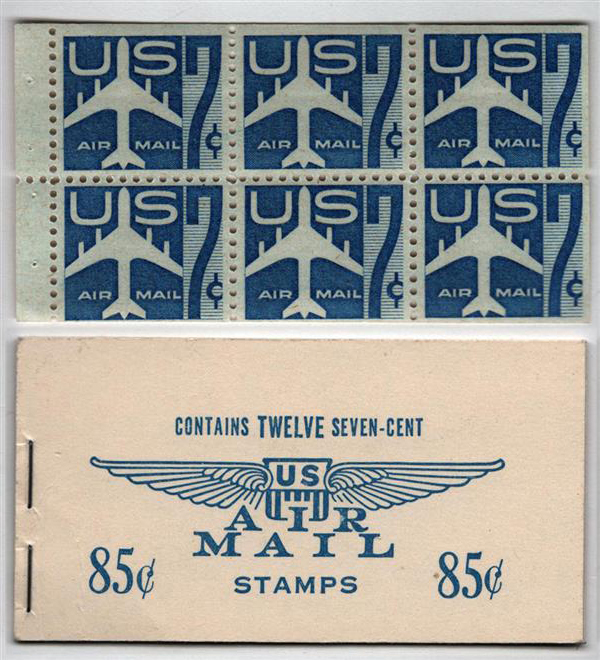 US #BKC6 – A 1958 airmail stamp booklet picturing a jet silhouette.

On June 22, two Lockheed P-80 Shooting Stars departed the air show carrying 750 Airmail letters each.  One of the planes went to Washington, DC, while the other went to Dayton, Ohio, and then Chicago, Illinois.  Some of the letters they carried were addressed to President Harry Truman, Chicago Mayor Edward Kelly, and Orville Wright.  Letters to be flown over Schenectady were franked with an 8¢ Airmail stamp and processed at a temporary post office set up at the airport.  GE prepared their own special envelopes for the event. 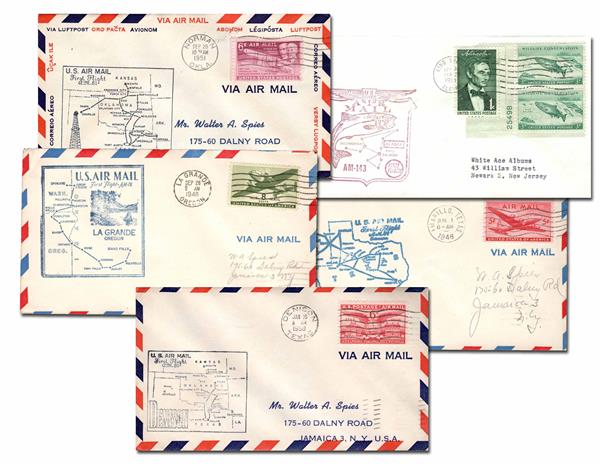 At the time of the event, the Post Office didn’t have immediate plans to offer regular jet Airmail service – rather, it was a display of what was possible.  It would be several more years before jet Airmail delivery became a regular occurrence.