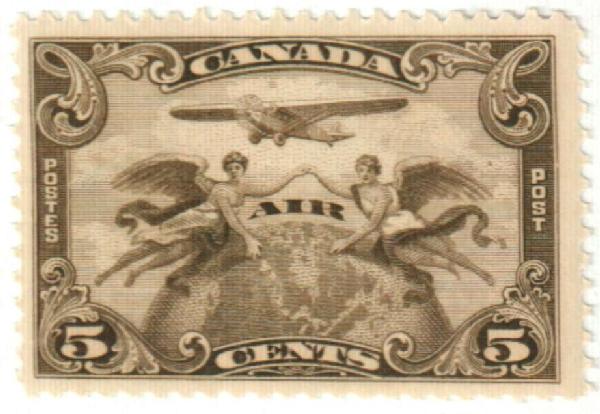 On June 24, 1918, Captain Brian Peck made the first airmail flight in Canada.

Like many nations at the time, Canada had sent a number of pilots to Europe to join in World War I. However, many didn’t return home and the number of Royal Flying Corps recruits was very low. 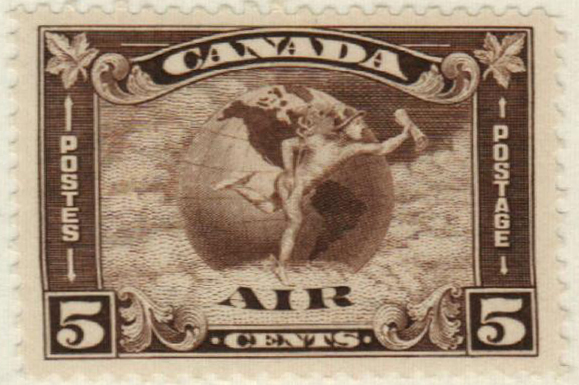 Canada #C2 pictures the Roman messenger Mercury with a scroll in hand.

To increase interest, Captain Brian Peck arranged an air exhibition in which he’d fly from Montreal to Ontario. Meanwhile, members of the Aerial League of the British Empire heard of Peck’s planned flight and saw it as a unique opportunity. They were determined to make it the first airmail delivery in Canada, proving “that aviation was the way of the future.” Two members, G. Lighthall and E. Greenwood contacted the Postmaster General in Ottawa and convinced him send mail with Peck on his flight. 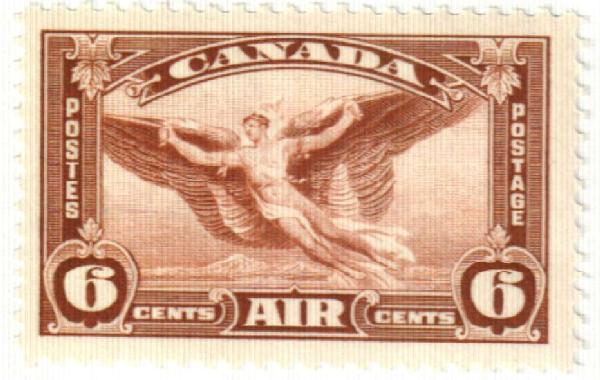 Canada #C5 pictures the Greek character Daedalus, who constructed wings for himself and his son Icarus.

Peck’s flight was initially scheduled for June 22, 1918, but was postponed due to poor weather. Then, on the morning of June 24, 1918, Peck wound up his JN-4 Curtiss Canuck two-seater at Bois Franc Polo Grounds in Montreal and prepared for the flight. With his mechanic, Corporal C.W. Mathers, in the passenger seat carrying the bag of 120 letters, Peck lifted off at 10:12 a.m. Wind and rain were strong that day, forcing Peck to land to refuel in Kingston and Deseronto. Peck reached his destination, the Leaside Aerodrome in Ontario, at 4:55 p.m. 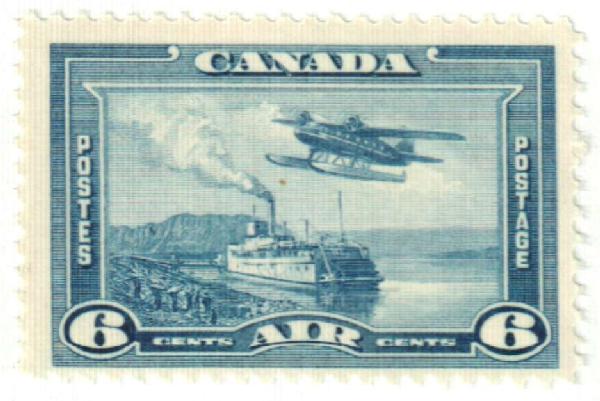 Canada #C6 pictures a monoplane over the Mackenzie River.

At the time, it may have been puzzling to spectators that watched as Peck’s plane struggled to get off the ground. And it never flew above an altitude of 40 feet. The plane’s excessive weight was likely part of the reason it needed to stop and refuel twice. It wasn’t revealed until 1954 that the plane had secretly been weighed down by something illegal at the time – scotch! Alcohol was prohibited in Ontario since 1916, but one of Peck’s friends asked him to sneak him some on the now-historic flight.

It’s interesting to note that the covers from this first airmail flight were incorrectly dated June 23. The special cachets created for the event read, “Inaugural Service Via Aerial Mail Montreal 23.6.1918.” 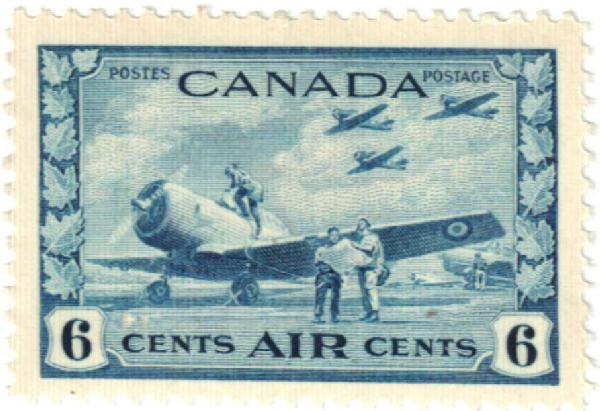 Weeks later, Katherine Stinson became the first female pilot to deliver airmail in Canada on July 9, 1918. Over the next five years, there were about 20 more flights that carried mail, though Canada still had no official airmail service. Also during the 1920s, various companies began flying to the more remote northern areas of Canada, often for prospectors or miners. These companies were permitted to charge for the letters they delivered and even issued their own stamps, which could be bought from some post offices. But the Post Office was not officially in charge of the service nor did it help pay for it.

Finally, in 1927, Canada’s Post Office began budgeting for and experimenting with airmail service. The first experimental service was between Montreal and Rimouski, and was intended to connect with trans-Atlantic steamers to speed up mail with Europe. The following year, Canada issued its first airmail stamp on September 21, 1928. There were two types of Post Office flights – airmail, which provided faster service, and air stage, which delivered mail to areas that were too difficult to reach by other means of transportation. 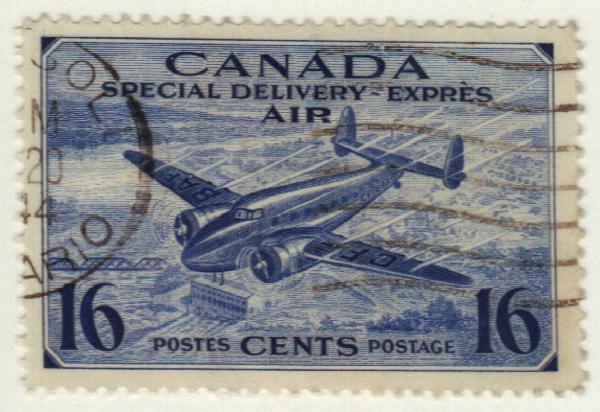 In 1939 Canada introduced daily airmail service between Montreal, Toronto, and Vancouver. And in 1948, they created All Up Service, by which all first class mail in Canada weighing up to one ounce was sent by airmail without paying an additional fee. This service eventually spread to cover mail sent to the U.S. and overseas as well.