US #2191 from the Great Americans Series.

General of the Air Force Henry “Hap” Arnold was born on June 25, 1886, in Gladwyne, Pennsylvania.

After graduating from high school, Arnold had intended to go to Bucknell University to enter the Baptist ministry.  However, after his older brother refused to take the entrance exam for West Point, in opposition to their father, he took the test himself and placed second on the list.

Arnold received a delayed appointment and entered West Point one month late.  While there, he earned a reputation as a prankster, helping to found the “Black Hand” group of pranksters.  He also played football, track and field, and polo for the school.

Upon graduating, Arnold hoped to enter the cavalry, but was instead assigned to the 29th Infantry.  In 1909, he saw an airplane in flight for the first time and was fascinated.  Two years later, he jumped at the chance to transfer to the Signal Corps to attend flying school.   Arnold went to Ohio to learn how to fly at the Wright Brothers’ aviation school.  After 28 lessons, he made his first solo flight on May 13, 1911. 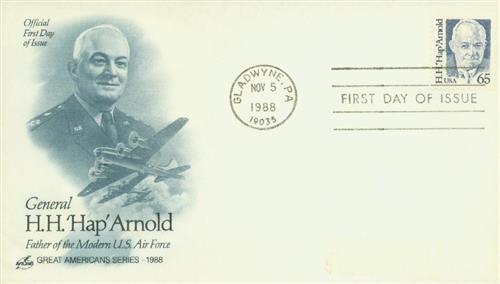 In June, Arnold went to Maryland to begin work as one of the Army’s first flight instructors.  While there, he set and broke an altitude record three times.  And in September 1911 he became the first US pilot to carry mail.  Arnold is credited as being the first pilot to fly over the US Capitol.  He also won the first of two Mackay Trophies for “most meritorious flight of the year.”  In 1917, Arnold went to Panama to organize and command the air service there. 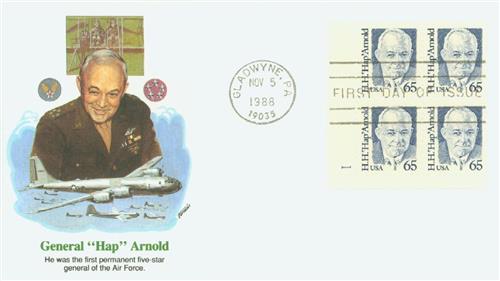 When the US joined World War I, Arnold requested a post in France, but he was in Washington, DC at the time, and the Aviation Section needed officers at their headquarters.  While he didn’t get to fight, Arnold gained important experience he would later put to use during World War II.  He was involved in aircraft production and procurement, the building of air schools and fields, recruiting and training cadets, and more.  In August 1917, he became the youngest full colonel in the Army.

Arnold spent the inter-war years moving up in rank and promoting long-term research to improve the Air Corps.  He also wrote a series of children’s books, the “Bill Bruce Series,” for children interested in flying. 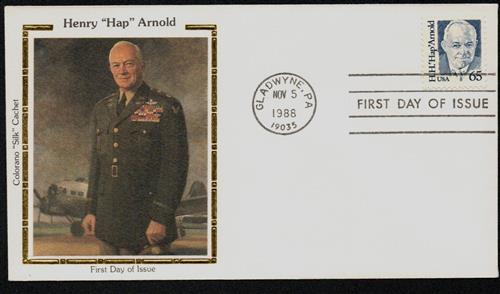 As World War II loomed, Arnold pushed for the development of jet engines and was promoted to lieutenant general after the attack on Pearl Harbor.  He also worked to get new aircraft created, including the B-29 Superfortress, and backed initiatives like the Doolittle Raid. As commanding general of the US Army Air Forces, Arnold directed all air activities in the war against Germany and Japan.  Under his command, the force grew from 22,000 men and 3,900 planes to 2.5 million men and 75,000 planes. 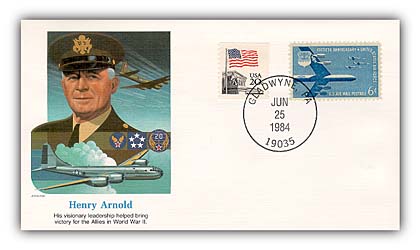 In 1943, Arnold went on a 35,000-mile tour of North Africa, the Middle East, India, and China and attended the Casablanca Conferences.  In the final months of the war, Arnold oversaw the campaign against the Japanese home islands.  It was his B-29 Superfortress that brought an end to the war when it dropped the atomic bombs on Hiroshima and Nagasaki.

Arnold created Project RAND (Research and Development) after the war, aimed at studying military issues.  Failing health forced him to retire in June 1946.  By the time he retired, Arnold had earned a number of honors – three Distinguished Service Crosses, the Distinguished Flying Cross, and an Air Medal, as well as decorations from several other nations.  In 1949, he was made the first five-star general of the Air Force.

Arnold died on January 15, 1950.  Many places and awards are named in his honor, including the Arnold Engineering Development Complex and the Arnold Air Force Base in Tennessee.  He was also inducted into the International Air and Space Hall of Fame.

Click here for a neat video about Arnold’s life.