Dunbar enjoyed writing from an early age, penning his first poem at the age of six and participating in his first public recital when he was nine.  Dunbar’s mother learned to read so she could help him with his homework and read the Bible with him often.

The only African American student at his high school, Dunbar was chosen as the president of the school’s literary society and editor of the school newspaper.  He was also on the debate team and was friends with classmate Orville Wright.

Dunbar published his poems for the first time when he was 16.  Two of his poems appeared in Dayton’s The Herald newspaper.  Two years later, he wrote and edited the city’s first weekly African American newspaper, The Tattler, which was printed by the Wright brothers. 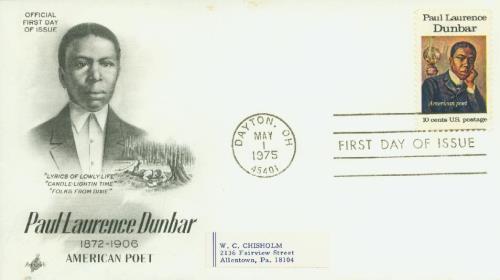 Dunbar had hoped to go to law school, but his family couldn’t afford it.  So he worked as an elevator operator.  He asked his friends, the Wright brothers, if they could print some of his poems in a book, but they didn’t have the capability.  However, they suggested a publishing house that printed his first collection of poetry, Oak and Ivy, in 1893.  His book sold well, and he sold several copies to passengers on his elevator. 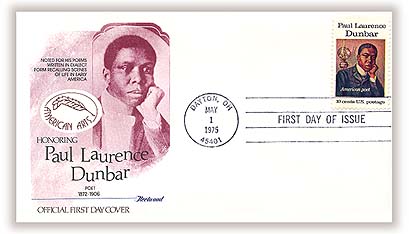 Soon Dunbar’s work caught the attention of several influential people.  Among them were fellow author James Whitcomb Riley and attorney Charles A. Thatcher.  Thatcher offered to pay for Dunbar to go to college, but he wanted to continue writing.  Instead, Thatcher helped Dunbar arrange readings of his work in larger cities at libraries and special events.  Another local man, Henry A. Tobey, helped Dunbar distribute his book, and together with Thatcher helped him publish his second book, Majors and Minors, in 1896. 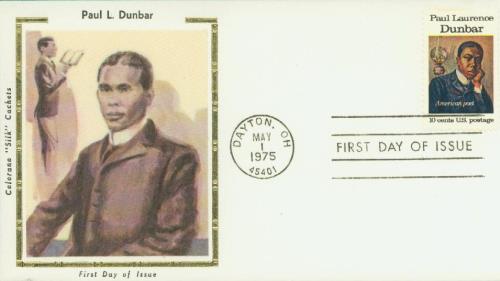 In June of 1896, the editor of Harper’s Weekly published a positive review of Dunbar’s book, which helped him earn national recognition.  Soon, Dunbar’s work was printed in a number of leading journals, including the Saturday Evening Post and the Denver Post. 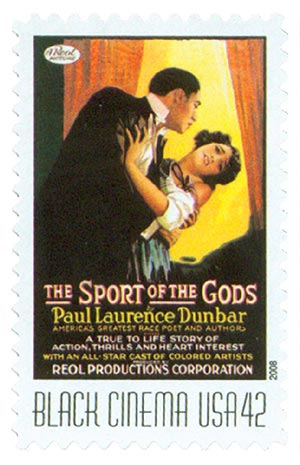 Dunbar soon began writing short stories and novels, some of which were well received and some which weren’t.  Among the better received was The Sport of the Gods, which was later made into a movie.  Dunbar also wrote the lyrics for In Dahomey, the first musical to be written and performed entirely by African Americans.

In 1897, Dunbar embarked on a literary tour of England.  While there, he met Samuel Coleridge-Taylor, who put some of his poems to music.  Dunbar briefly worked at the Library of Congress in 1897, but left to focus more on his writing.  He was also active in the civil rights movement and helped found the American Negro Academy.  Dunbar also attended Howard University when he lived in Washington, DC.

Dunbar had a number of high-profile friends during his life.  He remained close friends with the Wright brothers and was also friends with Frederick Douglass, Booker T. Washington, and James D. Corrothers.  Dunbar attended both of Theodore Roosevelt’s presidential inaugurations.  The two shared a brief correspondence, with Dunbar sending the president a poem and Roosevelt in return sending two volumes of poems.  Roosevelt later presented Dunbar with a ceremonial sword. 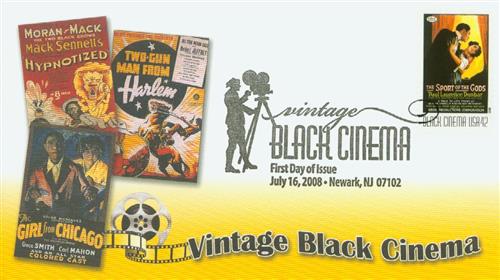 Dunbar was diagnosed with tuberculosis in 1900 and died from the disease on February 9, 1906, at just 33 years old.  During his short career, he published 12 books of poetry, four books of short stories, four novels, and a play.  No other African American published as many books as he did until 1950.  A number of schools and other locations around the country have been named in his honor.