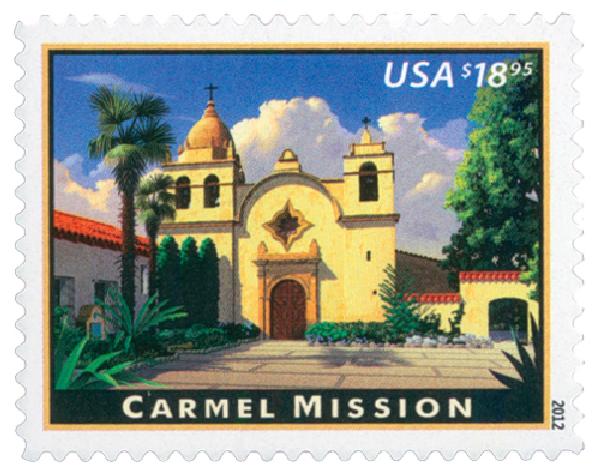 US #4650 was issued to cover the Express Mail Rate.

Born in Majorca, Spain, Serra was sent by the Spanish emperor to establish a series of missions in present-day California.  The missions were founded to establish permanent settlements, prevent Russians from encroaching in the region, and spread Christianity to the native Indians. 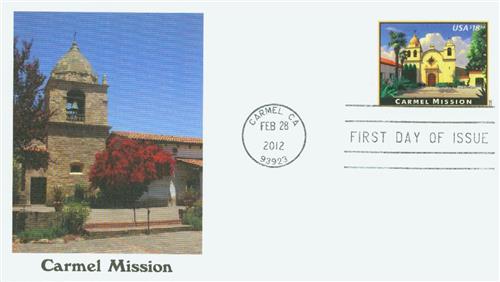 Serra established the first California mission in July 1769, in present-day San Diego.  The following year, Serra and a crew boarded a ship, while another group traveled by land to establish another mission at Monterey.  They had been there months earlier and planted a large cross.  Upon the arrival of the land expedition in May 1770, they found the cross surrounded by feathers, broken arrows, and meat.  They walked to the Carmel Bay, where they found a group of Native Americans and exchanged gifts.  The land and sea expeditions were reunited on May 31 at Monterey Bay. 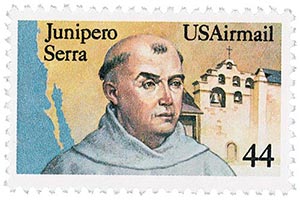 On June 3, 1770, Pentecost Sunday, Serra led the first church service at what would become the Carmel Mission.  The service was held in a makeshift chapel built next to a large oak tree near Monterey Bay.  As Serra described it, “The men of the land and sea expeditions coming from different directions met here at the same time, we singing the divine praises in our launch, while the gentlemen on land sang in their hearts.” 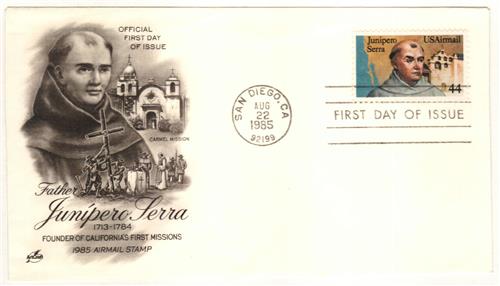 After the ceremony, the men shouted, “Long live the Faith!” and “Long live the King!” followed by the ringing of bells and firing of muskets and the ship’s cannon.  The new mission was named after Saint Carlo Borromeo, the first archbishop of Milan, Italy.

The following year, Father Serra relocated the mission near the Carmel River, where the soil was rich and the water abundant.  He also didn’t want his new converts to be negatively influenced by the Spanish soldiers stationed in Monterey. 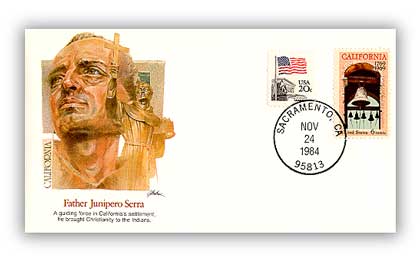 The first years were difficult.  Father Serra and his faithful followers relied on supply ships that were often delayed because of weather.  Bear meat and wild berries kept them from starving.

As the mission grew, the Indian converts lived and worked on the farm, providing for the needs of its residents.  The first wood and mud buildings were replaced with stronger adobe structures.  At its height in 1794, Carmel Mission was home to 927 people. 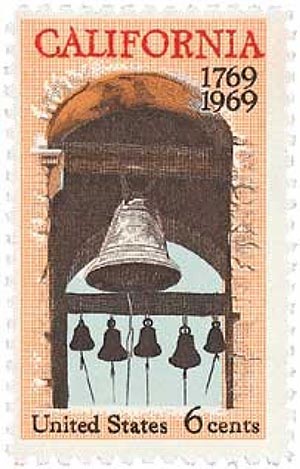 US #1373 pictures the Carmel Mission belfry.

Father Serra established 21 missions along the California coast, each about one day’s ride by horseback from the next one.  Carmel was his favorite.  Because it was close to Alta California’s capital, Monterey, he made the mission his headquarters until his death in 1784.  After his death, a stone church was built on the site and Father Serra was buried in the church.

The church fell into disrepair after the Mexican government closed it in 1834 and claimed the lands.  By 1859, California was part of the United States, and the government returned the mission to the Catholic Church.  Restoration began in 1884.  The most constructive period of rebuilding began in 1933.  The work continues today, and about 150,000 visitors come to the mission each year to discover its history for themselves.  Carmel Mission, a monument to the struggles and triumphs of the past, is now a National Historic Landmark.