US #1080 was issued for the 50th anniversary of the Pure Food and Drug Act. Click image to order.

On June 30, 1906, President Theodore Roosevelt signed the Pure Food and Drug Act and the Meat Inspection Act into law, to help improve the quality and labeling of America’s food and medicines.

At the beginning of the 20th century, there was a great deal of public pressure to improve the standards governing America’s food and drug industries.  Many states had food laws, but they were not well enforced.  Also, regulations varied between states, and products that were legal in one state could make their way into other states where they were illegal. 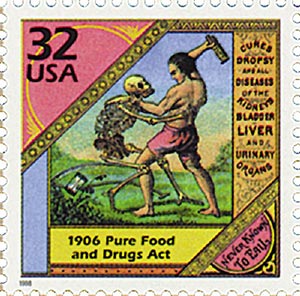 US #3182f from the Celebrate the Century Series. Click image to order.

For nearly 20 years, the chief of the Bureau of Chemistry in the US Department of Agriculture, Harvey W. Wiley, had been gathering information to prove that a federal food and drug law was needed.  His work gained support by consumer groups, journalists, the American Medical Association, and eventually President Theodore Roosevelt.

Another driving force was Upton Sinclair’s novel, The Jungle.  In 1904, Sinclair had gone undercover in a meatpacking plant.  He was horrified by the working conditions and wrote The Jungle to share what he had found.  Published in February 1906, Sinclair had mostly meant to expose the poor working conditions, but his descriptions of unsanitary practices and numerous health violations struck a chord and sparked public outcry. 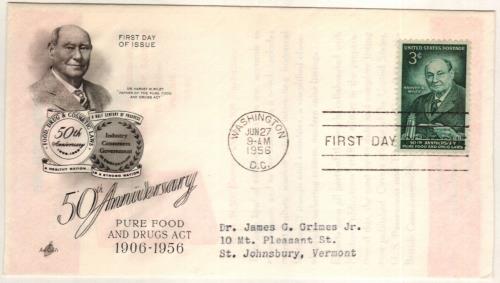 After reading The Jungle, President Theodore Roosevelt ordered a full investigation of the meatpacking industry, including surprise inspections.  Even though meat-packers learned of the visits, the inspectors were revolted by their discoveries.  After receiving a “sickening report,” Roosevelt signed the Meat Inspection Act and the Pure Food and Drug Act, which regulated such industries, into law on June 30, 1906. 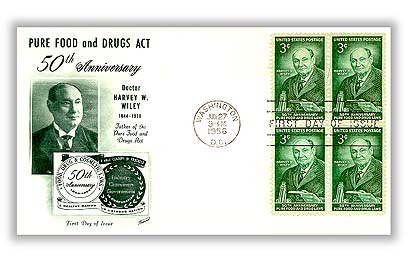 The Pure Food and Drug Act and the Meat Inspection Act marked the beginning of federal regulation of food and drug preparation.  These laws also required foods and drugs to be properly labeled, for meat to be inspected, and for meatpacking plants to maintain sanitary conditions.  All drug labels had to list if any of 10 ingredients deemed addictive or dangerous, such as alcohol, morphine, opium, and cannabis, were present.  This act prohibited the movement of impure food and drugs between states. 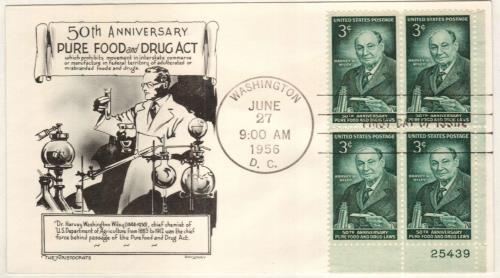 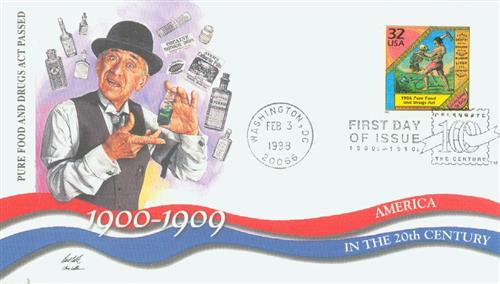 The Bureau of Chemistry, within the US Department of Agriculture, was placed in charge of enforcing the Pure Food and Drug Act.  The bureau was renamed the Food and Drug Administration (FDA) in 1930.  The Food Safety and Inspection Service implemented the Meat Inspection Act. 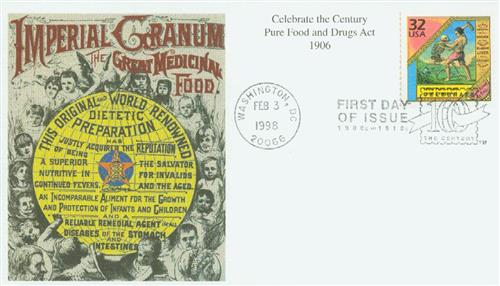 Over the years, some deficiencies were found in the original laws and the Pure Food and Drugs Act was replaced with the Federal Food, Drug, and Cosmetic Act in 1938.  With the addition of several amendments, it has protected the health of Americans ever since.