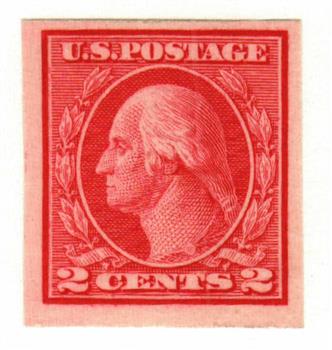 US #459 – Click the image to order this stamp in your choice of conditions.

On June 30, 1914, the US issued its very first stamp printed on the rotary press, US #459.  It’s also the only imperforate US rotary press coil.

Prior to 1914, postage stamps were printed using the flat plate method.  Sheets printed by this process contained 20 rows of stamps with 20 stamps in each row.  The introduction of private perforating machines presented a problem.  Workers had to paste strips of 20 stamps together, end to end, to form long coils before they could be fed through the machines.  This was inefficient and costly. 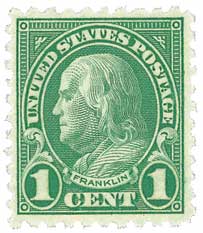 US #581 – The first sheet stamp printed on the rotary press.

By 1914, the demand for coils had grown even greater.  Once again, the Bureau of Engraving and Printing (BEP) was in search of a new method that would increase production and hopefully reduce costs at the same time.  It was this need that prompted Benjamin Stickney, a mechanical expert at the BEP, to develop the rotary press.

Rather than “stamping” the design, the rotary press was capable of continually “rolling” the stamp design along a length of paper known as a “web.”  His invention, which utilized a continuous roll of paper to print the stamps, would eliminate the “paste-up” stage entirely, thus saving a great deal of time.  This would result in both an increase in production and lower operating costs.

US #459, a 2¢ Washington stamp, was issued June 30, 1914, just two days after the assassination of Austria’s Archduke Ferdinand.  Ferdinand’s death set off a chain of events that led to World War I.  As the winds of war swept across the globe, even sharp-eyed collectors failed to notice that a new stamp variety had been issued.  US #459 was the very first stamp produced by the rotary press – and the only imperforate rotary press coil in US postal history.

US #459 was produced in a single printing, and a mere 21,000 stamps were issued.  Most were privately perforated by the US Automatic Vending Machine Company and used for commercial mailings in two New England states.  Three full years passed before collectors realized the existence of this variety of the 1914 2¢ Washington stamp.  Remarkably, two rolls of US #459 had survived in mint condition – a roll of 500 stamps and another of 1,000. 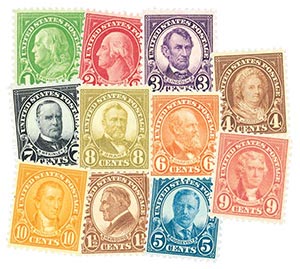 US #632//42 – This series saw the introduction of the 10 ½ perforation.  Linn’s author Gary Griffith said these stamps represent “if not perfection, then at least a high degree of achievement.”

Having been tested successfully, the rotary press was adopted as the method for printing all coil stamps.  These stamps were slightly larger in size than stamps printed on a flatbed press.  Eventually, the rotary press was used to print sheet stamps and booklet panes as well.  By the mid-1920s, production rates had jumped from 1,000,000 stamps per day to nearly 6,000,000!  Through the years, Mr. Stickney’s invention proved to be one of the most productive pieces of equipment ever created by the Bureau.  Today, with the exception of an operator and someone to transfer the stamps between various stages, modern machinery has nearly eliminated the need for human workers.