Following the September 11 terrorist attacks, many people wanted to help the families of those emergency workers who were killed or critically injured responding to the attacks.  On November 12, 2001, Congress passed the 9/11 Heroes Stamp Act of 2001.  The act permitted the USPS to produce a semi-postal stamp to raise money for these families.

The stamp artwork was based on a photo taken by photographer Thomas Franklin of three weary firefighters raising a flag over the rubble that had been the World Trade Center.  The stamp covered the 34¢ first-class postage rate and included an 11¢ surcharge that would be deposited into a fund for the families. 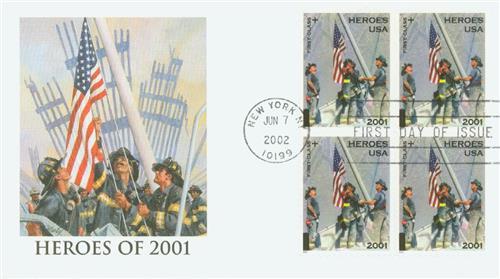 US #B2 – Fleetwood First Day Cover. Click image to order.

The stamp went on sale on June 7, 2002.  The First Day of Issue ceremony was held on the Lawn at Battery Park in New York City.  The ceremony included a presentation of colors as well as speeches by the governor of New York, the Secretary of Housing and Urban Development, and several senators. 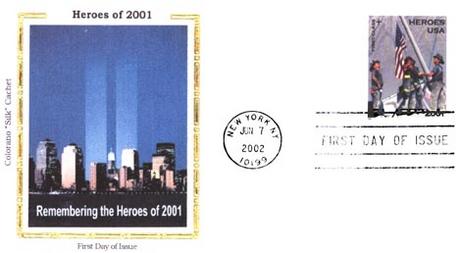 The stamp remained on sale through December 2004, with a total of 133 million being sold.  During the two-plus years it was on sale, the stamp raised $10,565,073.  The money raised was given to the Federal Emergency Management Agency (FEMA), which would then distribute the funds to the families of emergency responders killed or disabled during the 9/11 attacks on New York, the Pentagon, and Shanksville, Pennsylvania.  About 1,000 people or families were eligible to receive aid, and each received about $10,000. 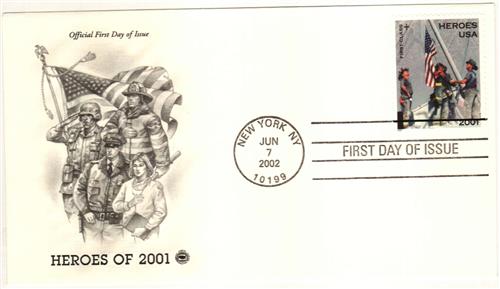 US #B2 – Classic First Day Cover. Click image to order. 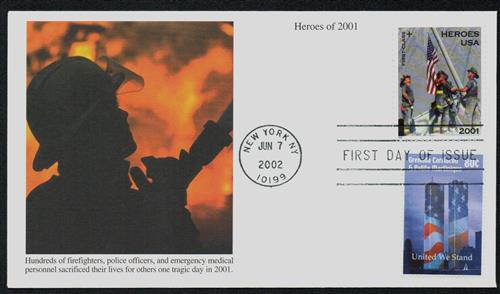