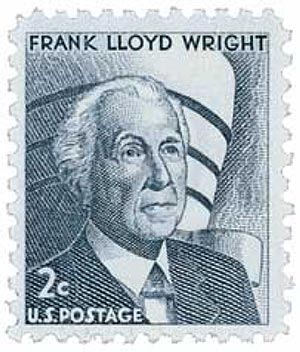 When Wright was a child, his mother was convinced he would build beautiful buildings, so she did much to encourage him.  In 1876, she visited the Centennial Exhibition in Philadelphia where she saw educational blocks known as Froebel Gifts.  She purchased a set for Wright who spent hours playing with the geometric blocks, and later said they had a strong influence on him. 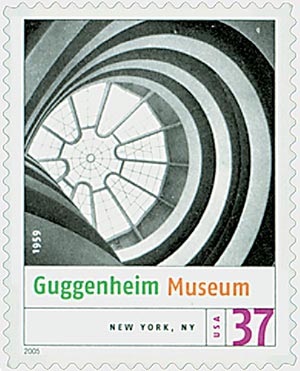 US #3910a from the Modern American Architecture issue. Click image to order.

In 1885, Wrights parents were divorced and he never saw his father again.  He changed his middle name from Lincoln to Lloyd to honor his mother’s family, the Lloyd Joneses.  Wright went on to attend high school, but it’s unknown if he graduated.  He then attended the University of Wisconsin-Madison where he took civil engineering classes part-time for two semesters, but left the school to find work in architecture. 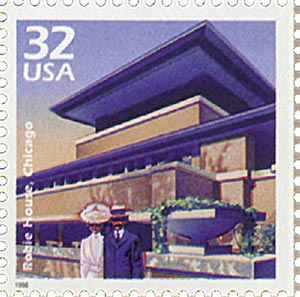 The Chicago fire of 1871 had created a booming building industry in the city and Wright quickly landed a job there as a draftsman.  Within three years he was promoted to head draftsman at the successful Chicago firm of Adler and Sullivan.  He also worked on independent commissions for at least nine houses to supplement his income.

By 1893, Wright had opened his own firm and was further developing his style.  His trademark of clean geometric designs with open floor plans mirrored the broad, flat, Midwestern landscape that surrounded him.  It was a sharp departure from the lavish European trends still popular in the US at the time.  Wright’s so-called “Prairie style” was to become the first truly American architectural style. 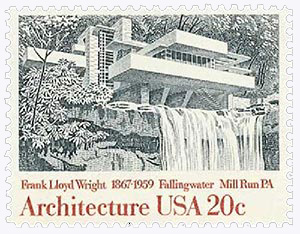 US #2019 pictures Falling Water, which has been called “the best all-time work of American architecture.” Click image to order.

As his style continued to evolve, he became even more focused on simple, utilitarian designs that complemented their surroundings and not disrupt the landscape.  He called it “Organic Architecture.”  Marrying this philosophy to the Arts and Crafts Movements of the early 20th century, Wright created some of his best works. 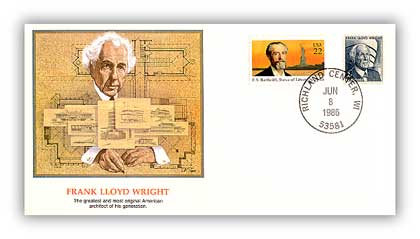 In 1943, Wright was asked to design a building to house the art collection of Solomon R. Guggenheim.  He did not want it to be built in New York, because he considered the city overcrowded.  The architect finally agreed, but insisted the museum would be located near Central Park.  The resulting round building is wider at the top than the bottom, resembling a giant, coiled white ribbon.  Inside, the gallery is a continuous ramp that extends from the ground floor to the ceiling.  Construction on the Guggenheim began in 1956, but it wasn’t completed until about six months after Wright’s death on April 9, 1959. 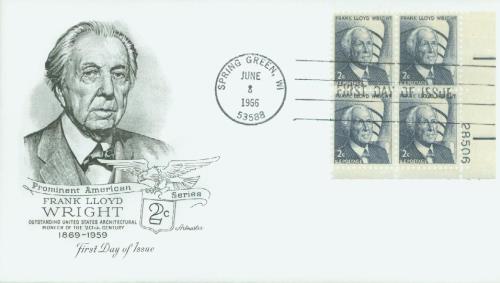 Over the course of his nearly 70-year career, Wright created buildings ranging from those typical of the late 1800s to highly imaginative, ultramodern designs.  Wright designed more than 1,000 buildings in his lifetime, 532 were completed. 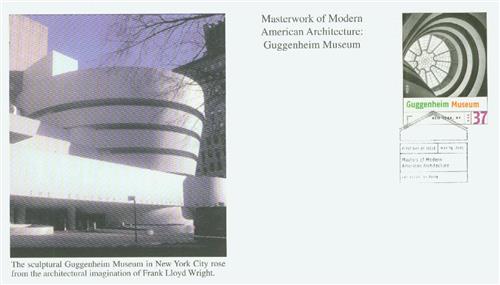 Wright emerged as perhaps the most renowned architect in US history.  Because of his extensive and innovative work, the American Institute of Architects named him the “Greatest American Architect of all Time.” 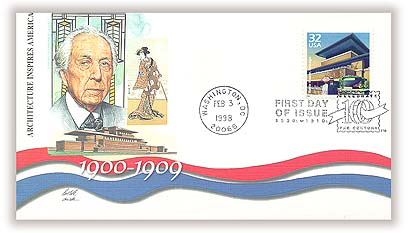