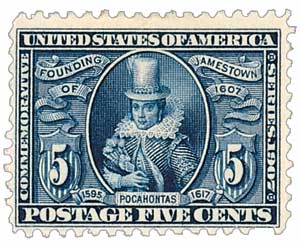 On March 21, 1617, the funeral of Pocahontas was held at Saint George’s, Gravesend, Kent, England.

The exact date and year of Pocahontas’ birth are unknown, but historians estimate it to have been around 1596.  She was the daughter of Chief Powhatan, the chief of an alliance of about 30 Algonquin groups in Tidewater Virginia. 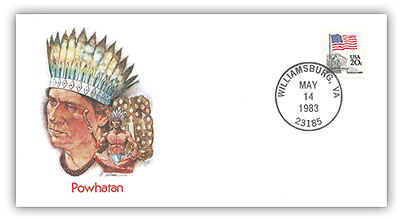 As was common at the time, Pocahontas had several different names.  Her secret name was Matoaka, which means “Bright Stream Between the Hills.”  She was also called Amonute, which has never been translated to English.  Pocahontas was a nickname she received as a child that means “little wanton” or “playful one.”  As a child, Pocahontas was likely instructed on what was considered women’s work – foraging for food and firewood, farming, and collecting materials to build thatched houses. 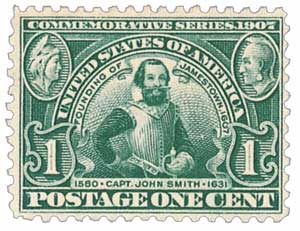 US #328 from the Jamestown Exposition issue.

In April 1607, Captain John Smith and about 100 settlers arrived in America and established a fort at Jamestown.  In the coming months, they had both friendly and hostile interactions with the local Native Americans.  That December, a member of Pocahontas’ tribe captured Smith and brought him back to the chief.  According to Smith’s journals, he was brought to a large feast and then had a long talk with the chief.  During the talk, the chief offered Smith control of the town of Capahosic, to keep him and his men close by and under his own control.  Years later, in 1616, Smith told the tale that is famous today.  In a letter to Queen Anne of Denmark to promote Pocahontas’ visit to England, he claimed the chief was going to kill him.  His head was placed on a stone, but at the last moment, Pocahontas placed her head over his, saving his life.  Most historians doubt this story is real, and believe it was made up to convince the Queen that Pocahontas was a hero worthy of meeting. 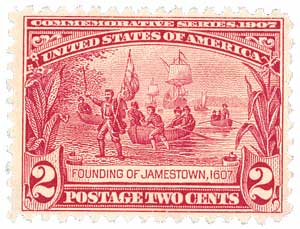 US #329 was issued for the 300th anniversary of the founding of Jamestown.

While the famed story may not be true, many believe Pocahontas did befriend Smith and frequently visited the Jamestown colony.  She often went there and played games with the children and would bring them food every four or five days.  After Smith was injured in a gunpowder explosion in 1609, Pocahontas was told he was dead and stopped visiting Jamestown.

That same year, a war broke out between the Jamestown settlers and Pocahontas’ tribe.  When they learned that Pocahontas was visiting another Native American village, some of the English settlers developed a plot to kidnap her and they succeeded.  They held her for ransom in exchange for English prisoners, weapons, and tools.  While Powhatan returned the prisoners, he didn’t hand over enough weapons and tools, so Pocahontas was held captive for a year. 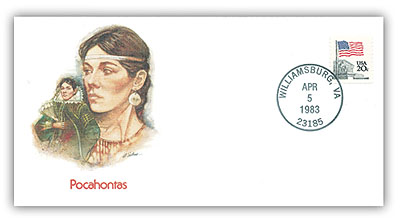 During her time in captivity, Pocahontas was taught about Christianity and she ultimately decided to be baptized and adopted the name, Rebecca.  In 1614, she was given a chance to see her father and complained that he valued her “less than old swords, pieces, or axes” and that she preferred living with the English because they loved her.

It was also during this time that Pocahontas met tobacco farmer John Rolfe.  The two were married in April 1614 and they had one son together.  Their marriage helped to calm tensions between the settlers and the Native Americans, bringing about eight years of peace. 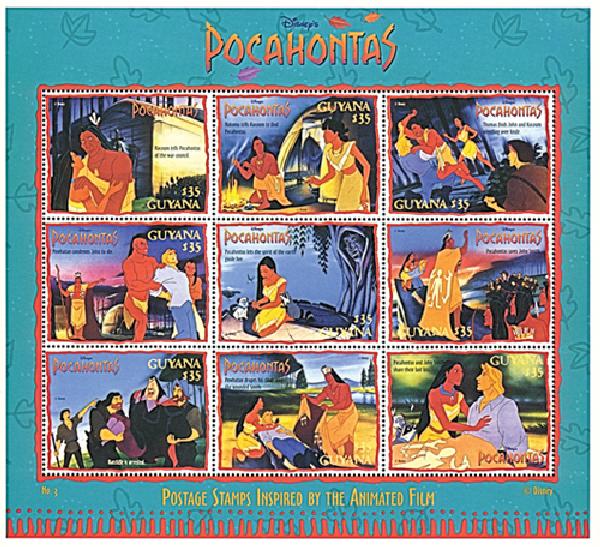 Item #MDS361C – The 1995 Disney film was a largely fictionalized account of Pocahontas’ experiences with John Smith.

In 1616, the Virginia Company of London wanted to bring Pocahontas to England to show how they could convert Native Americans to Christianity.  She and her family went in June 1616 and were well received.  During her time there, she discovered John Smith was still alive and the two were reacquainted.

In March 1617, Pocahontas and her family boarded a ship to return to America.  However, along the journey up the River Thames, she got very sick.  She was brought ashore at Gravesend and died shortly after.  Her funeral was held on March 21, 1617, at St. George’s parish in Gravesend, Kent.  The church was later destroyed and her gravesite has since been lost.