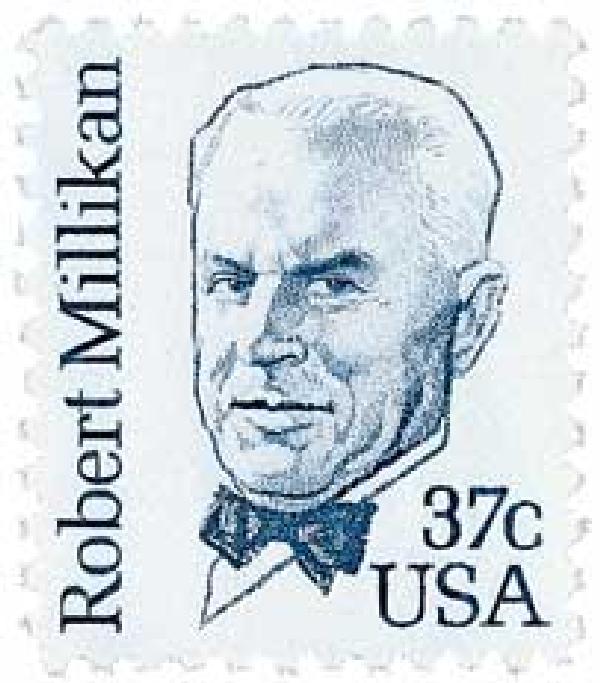 US #1866 from the Great Americans Series.

At the end of his sophomore year at Oberlin College, Millikan’s Greek professor asked him to teach elementary physics the following year.  At first, he was concerned because he didn’t know physics at all, but his professor reassured him that his top performance in the Greek class would enable him to teach physics.

Millikan then spent his summer studying physics.  He later recalled “I doubt if I have ever taught better in my life than in my first course in physics in 1889.  I was so intensely interested in keeping my knowledge ahead of that of the class that they may have caught some of my own interest and enthusiasm.”  Millikan held an enthusiasm for education for the rest of his life.  He went on to coauthor a series of popular introductory textbooks that were unlike others of the day.  Millikan’s books approached physics the same way physicists did and offered homework problems with understandable conceptual questions, as opposed to requiring students to only put numbers into formulas.

Millikan went on to earn his bachelors degree in 1891 and the first doctorate in physics from Columbia University in 1895.  Afterward, he became a professor at the University of Chicago.  It was here that he worked with his graduate student, Harvey Fletcher, on the oil drop experiment to measure the charge of an electron. 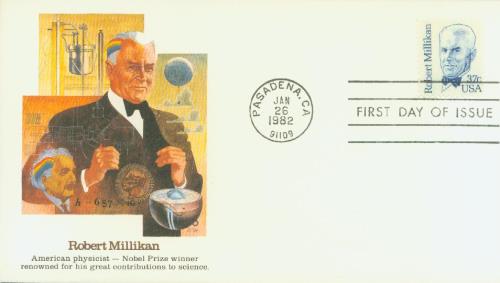 To do so, they balanced the “downward gravitational force with the upward drag and electronic forces” on small drops of oil placed between two metal electrodes.  As the oil’s density was known, the oil drops’ mass and forces could be calculated by their radii.  After repeating the experiments several times, they confirmed that the charges were all multiples of a base value.  They proposed this value was the charge of a single electron.  This work, which began in 1909, also helped to prove Albert Einstein’s explanation of the photoelectric effect and also led Millikan to find an accurate value of Planck’s constant.  Millikan would eventually earn the Nobel Prize for Physics for this work in 1923.

During World War I, Millikan was vice chairman of the National Research Council and helped develop anti-submarine and meteorological devices for the war effort.  After the war, he was part of the League of Nations’ Committee on Intellectual Cooperation. 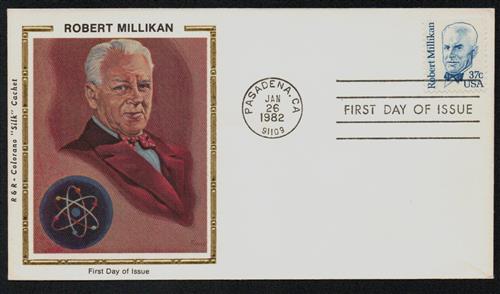 Millikan left the University of Chicago in 1921 to serve as director of the Norman Bridge Laboratory of Physics at the California Institute of Technology (Caltech).  There he studied radiation from outer space and concluded it was of extraterrestrial origin.  Millikan named this radiation cosmic rays.

Millikan was awarded the Presidential Medal of Merit for his work on jet and propulsion systems during World War II.  He also served as chairman of the Executive Council of Caltech until his retirement in 1945.  During his years in that role, he helped transform the school into one of America’s leading research institutions.

Millikan died from a heart attack on December 19, 1953.  Several schools as well as the Caltech library have been named in his honor.