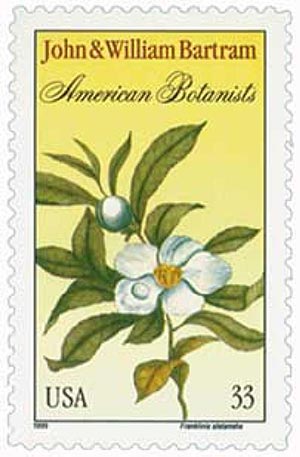 US #3314 pictures Franklinia, which Bartram discovered with his son.

Born into a Quaker farm family, Bartram had little formal education, aside from attending a small local school.  From a young age, he had an interest in medicine and medicinal plants.

Bartram built his own home in 1728 and continued the family farming tradition, but he also had a small area where he grew additional plants he found interesting.  Known today as Bartram’s Garden, it’s the oldest existing botanical garden in the country.

Bartram enjoyed exploring the colonies and collecting plants.  He traveled throughout the eastern colonies from Canada to Florida.  He also published books about his journeys and his exploits were printed in journals.  Beginning in 1733, Bartram began working with British merchant Peter Collinson.  Bartram shared his plants with Collinson, who in turn shared them with other British gardeners and friends. 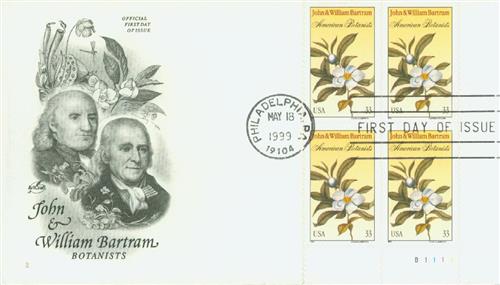 Every fall, Bartram sent Bartram’s Boxes to Collinson, who would distribute them to his friends in England.  These boxes usually contained about 100 varieties of seeds, dried plants, and other natural history artifacts.  He would occasionally send live plants, but they were much more expensive and difficult to send.  In return for his seeds and plants, Bartram’s British friends sent him back books and tools. 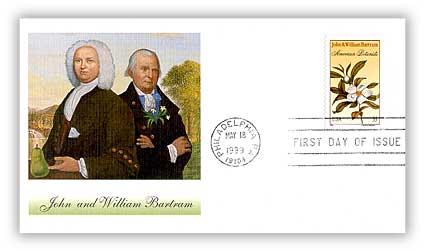 Bartram had befriended Benjamin Franklin and with him, was a co-founder of the American Philosophical Society.  In 1765, Collinson and Franklin convinced George III to appoint Bartram as King’s Botanist for North America.  He would hold that position until his death.  In this role, Bartram’s seeds and plants became part of the royal collection at Kew Gardens as well as the Oxford and Edinburg botanic gardens.  In 1769, he was elected a member of the Royal Swedish Academy of Sciences. 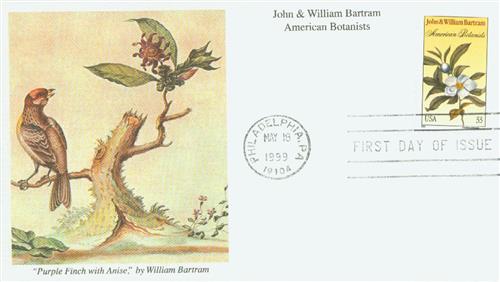 Bartram was responsible for the introduction of about 500 new plant species to England.  Many of these were named by European botanists.  Bartram is largely remembered for his discovery and introduction of several North American flowering trees and shrubs, including kalmia, rhododendron and magnolia species.  He also introduced the Venus flytrap to cultivation and discovered the Franklin tree.  Additionally, a genus of mosses is named for him – Bartramia, as well as the North American serviceberry, Amelanchier bartramiana, and the Christmas Kurrajong tree, Commersonia bartramia. 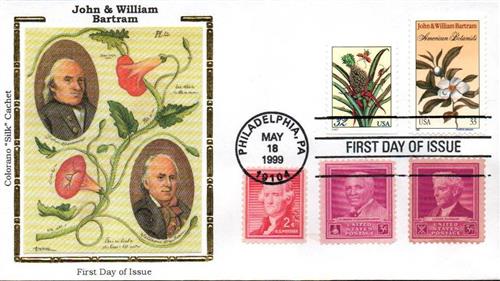 Bartram died on September 22, 1777.  Carl Linnaeus called Bartram the “greatest natural botanist in the world.”  He fathered 11 children during his life, one of which followed in his footsteps.  His son William was an accomplished artist who made hundreds of drawings of birds.  His 1791 book, Travels, greatly influenced English romanticism.  William established the nation’s first nursery and published America’s first plant catalog.