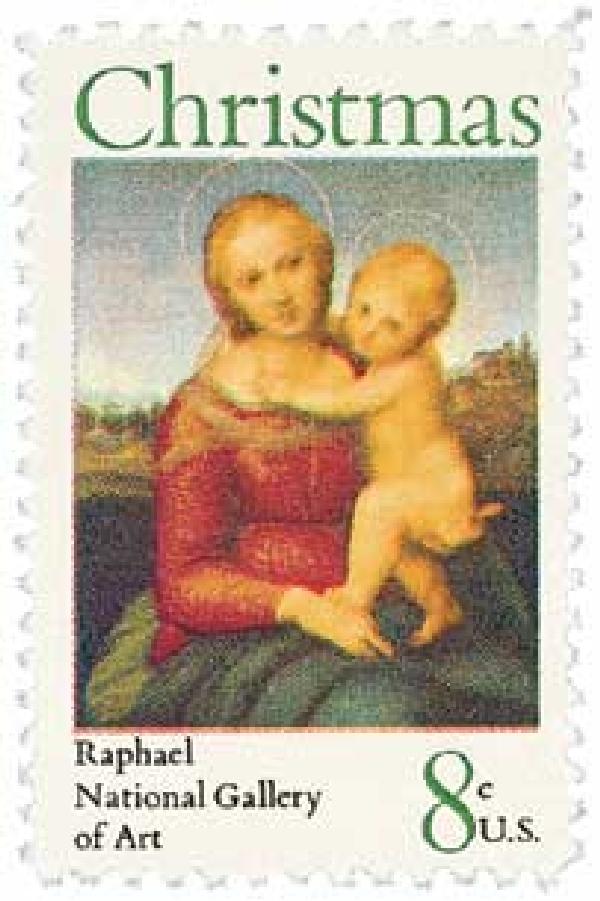 Raffaello Sanzio da Urbino, better known as Raphael, is believed to have been born on either March 28 or April 6, 1483, in Urbino, Duchy of Urbino.

Raphael was the son of Giovanni Santi, court painter to the Duke of Urbino.  As a child, Raphael spent a great deal of time in the court, which instilled in him excellent manners and social skills. 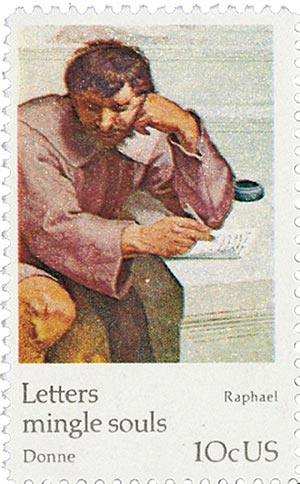 US #1530 pictures a portion of The School of Athens. Click image to order.

Raphael showed a great talent for art from an early age, and he helped out in his father’s workshop.  Both of his parents died by the time he was 11, leaving Raphael to be raised by his stepmother and uncle.  During his formative years, he studied under Pietro Perugino and is considered to be one of his greatest students.  In fact, Perugino’s influence is so obvious in Raphael’s early work, it’s sometimes hard to tell which artist was at work.  Perhaps Raphael’s most famous painting completed during this early period was St. George Fighting the Dragon. 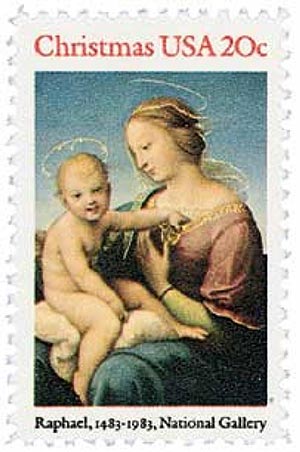 US #2063 pictures the Niccolini-Cowper Madonna. Click image to order.

In 1501, Raphael completed his first documented work, the Baronci altarpiece for the church of Saint Nicholas of Tolentino.  During this time, Raphael produced paintings for several other churches and began to paint Madonnas and portraits.  He was also specifically sought out to work on the Piccolomini Library in Siena Cathedral – showing he was already an in-demand artist at a young age. 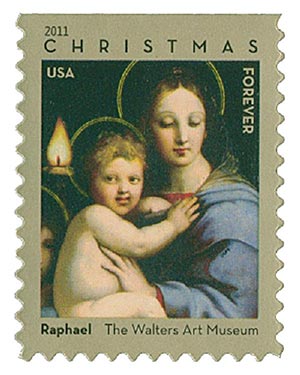 US #4570 pictures Raphael’s Madonna of the Candelabra. Click image to order.

While Raphael lived and worked throughout northern Italy, he spent a good deal of time in Florence, taking some influence by Florentine art.  Leonardo da Vinci, who was working in Florence around the same time, particularly influenced him. 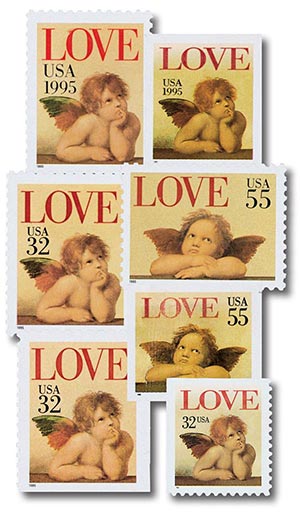 In 1508, Pope Julius II summoned Raphael to Rome.  A suite of rooms needed to be decorated in the Vatican and Raphael came very highly recommended.  His work there, known as the four Raphael Rooms, would have a huge influence on Roman art.  And his works The School of Athens, The Parnassus and the Disputa are considered some of his greatest masterpieces.  Working on these massive paintings, Raphael established a workshop with some 50 pupils and assistants.  Many of them contributed to his work, though they based their paintings on his very detailed drawings.

In his fresco The School of Athens, Raphael paints an imaginary scene where philosophers and scholars from different eras are together, discussing various theories.  At the center, Aristotle and Plato discuss topics of great importance.  One of the most interesting aspects of this painting is that Raphael uses the faces of his contemporaries in place of many of the men in the scene.  For instance, Plato’s face is actually Leonardo da Vinci, and Michelangelo can be seen sitting in the foreground, resting on a block of marble.  Keen-eyed observers may be able to spot Raphael himself in the right foreground. 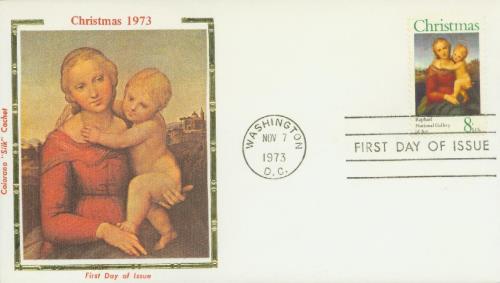 While his work at the Vatican occupied a great deal of his time, Raphael also painted several portraits while in Rome.  Most of these were of popes, friends, and kings.  Raphael also designed a series of 10 cartoons for tapestries for the Sistine Chapel.  Raphael also worked in architecture, designing several buildings in Rome.  At one point he was considered the most influential architect in the city. 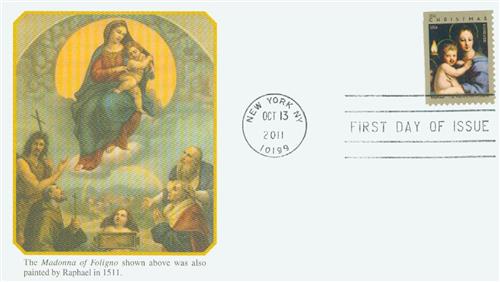 Raphael died on April 6, 1520, at the age of just 37.  The cause of his death is uncertain, but he was ill for two weeks before his passing, which gave him time to put his affairs in order.  Raphael received a large, grand funeral, attended by a large crowd.  His sarcophagus reads, “Here lies that famous Raphael by whom Nature feared to be conquered while he lived, and when he was dying, feared herself to die.”

Click here to view an online gallery of Raphael’s works.

Facebook
This entry was posted in March 2019, This Day in History. Bookmark the permalink.
Click here to cancel reply.