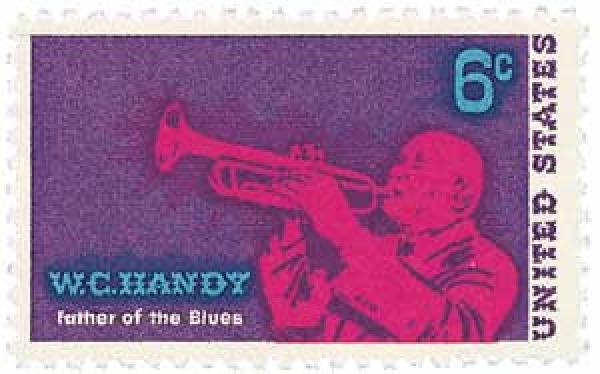 U.S. #1372 was issued on the 150th anniversary of the founding of Memphis, Tennessee.

William Christopher Handy was born on November 16, 1873, in Florence, Alabama. As a child he apprenticed in carpentry, shoemaking, and plastering, but had a love of music largely inspired by his time in church. 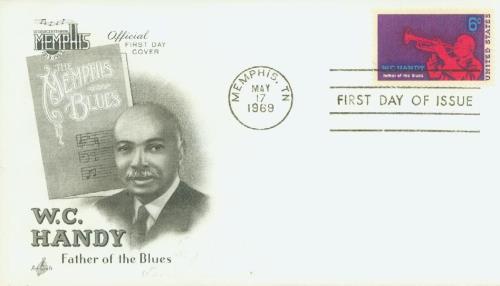 However, Handy’s father considered musical instruments to be tools of the devil. So Handy secretly saved money from picking berries and nuts and making lye soap to buy his first guitar. When his father found it he made him get rid of it, but also arranged for him to take organ lessons. Handy’s organ lessons didn’t last long, but he soon joined a band, again in secret, and bought a cornet from one of the other members of the group.

In his teens, Handy worked on a shovel brigade at the McNabb furnace. While the men waited for the furnace to work, they made music with their shovels to pass the time. As Handy described it, “the effect was sometimes remarkable… It was better to us than the music of a martial drum corps.” Handy went on to work briefly as a teacher and then in a pipe works plant. In his free time he created a string orchestra and taught people how to read music.

In the 1890s, Handy organized the Lauzetta Quartet. When the quartet heard about the World’s Fair in Chicago, they worked their way north, only to find out it had been postponed for a year. The quartet disbanded, but Handy waited and played his cornet at the fair in 1893. After the fair Handy joined a band and sang in a minstrel show before becoming bandmaster of Mahara’s Colored Minstrels. With this group he traveled parts of the U.S. and Cuba for three years.

Then in 1900 Handy was hired to teach music at the Alabama Agricultural and Mechanical College for Negroes (AAMC). He remained there for two years but was discouraged that they focused on classic European music, rather than that created in America. After leaving the school in 1902, Handy traveled around Mississippi to explore African American music. He then rejoined the Minstrels before organizing a new band – the Knights of Pythias.

The Knights of Pythias began playing clubs on Memphis’ Beale Street in 1909. That same year, Handy was hired to write a campaign song for mayoral candidate Edward Crump. Handy later changed the song and called it “Memphis Blues.” He published the sheet music for it, which led to its popularity. This song was also the inspiration for the foxtrot dance. Though Handy didn’t invent the Blues, and wasn’t the first to publish it, he is credited with popularizing it outside of region and making it one of America’s leading musical styles.

Handy was one of the first African Americans to make a successful living publishing music. Joining with Harry Pace he created Pace and Handy Sheet Music. By 1917 Handy had published several successful hits including “Beale Street Blues,” and “Saint Louis Blues.” Handy also published the works of other African American composers, including 150 religious and folk tunes, as well as about 60 blues songs.

In 1929 Handy worked with RCA to produce a short film named after his hit – Saint Louis Blues. Handy personally asked Bessie Smith to star in it, as she had gained popularity from singing the song a few years earlier. The film was a success and continued to be shown for three years.

In addition to publishing music, Handy wrote several books about music as well as an autobiography. He spent his final years in New York City before his death on March 28, 1958. Days after his death a movie based on his life, St. Louis Blues, was released starring Nat “King” Cole, Cab Calloway, Ella Fitzgerald, and more.