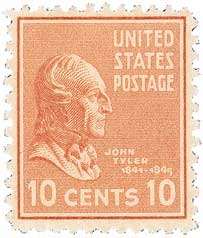 One of seven children, Tyler was raised as part of the Southern elite. The son of a Virginia governor and later federal judge, John Tyler learned early in life the importance of the Constitution and the necessity that it be strictly followed.

Tyler graduated from the College of William and Mary at the age of just 17. He then studied law before starting his own legal practice 1811. At this same time, Tyler was elected to the Virginia House of Delegates. He quickly became a well-known and respected politician for his convincing arguments. Tyler went on to serve in the U.S. House of Representatives and again in Virginia House of Delegates before being elected to the U.S. Senate. During his term in the Senate, Tyler served as President pro tempore (second in rank in the Senate after the Vice President). He was the only U.S. President to have held this position. 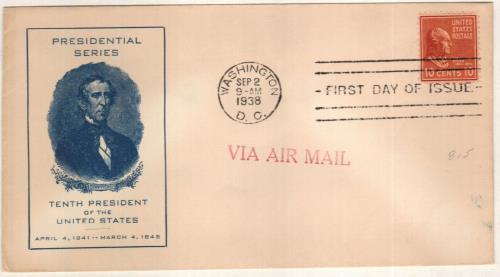 Tyler ran for Vice President in 1836 and came in third with 47 electoral votes. Two years later he was elected to the Virginia House of Delegates for the third time and was unanimously chosen as speaker.

During the election of 1840, Tyler was selected as William Henry Harrison’s running mate because he had done well in the South in the previous election and was popular there for his stance on states’ rights. The Harrison-Tyler campaign appealed to the common man and earned a strong electoral vote victory of 234 to 60. 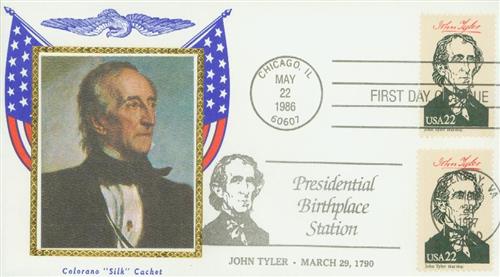 Tyler was inaugurated to his new position on March 4, 1841. His three-minute inaugural address called it an honor “to occupy a seat which has been filled and adorned…by an Adams, a Jefferson, a Gerry, a Clinton, and a Tompkins.” He also expressed his views on states’ rights. Shortly after the inauguration, Tyler returned to Williamsburg, “with the expectation of spending the next four years in peace and quiet,” as President Harrison did not expect to need his help.

However, the peace and quiet only lasted one month. In the early morning hours of April 5, 1841, two horsemen woke the Vice President with a letter from the cabinet, informing him that Harrison died the day before. By the next morning, Tyler was back in the capitol, while the nation questioned what would happen next. 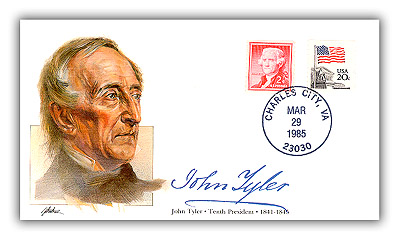 No President had died in office up to that point, and the wording of the Constitution resulted in several interpretations of its meaning. Some believed that Tyler did not need to be President to fulfill the duties of the office, while others believed he should serve as President for the remainder of the term. Tyler interpreted this to mean that he would become President, not “Vice President, acting as President,” as Harrison’s cabinet proposed. Despite the opposition from the cabinet, Tyler took the presidential oath on April 6.

Tensions between Tyler and his Cabinet continued to rise. One of the first major issues Tyler faced concerned the creation of a new banking system. Whig Senator Henry Clay supported the national bank, internal improvements, and protective tariffs. Tyler believed state sovereignty was more important than Clay’s “American System.” Further, Clay expected Tyler to allow him to run the country from the Senate and support his policies. However, Tyler had plans of his own – to create a weaker bank that would only be present in the states that wanted it. Neither man was willing to back down from his position.

The hostilities continued and despite compromise efforts, in September of 1841, Tyler’s entire Cabinet (with the exception of Daniel Webster) resigned in an attempt to force Tyler to resign as well. The move proved unsuccessful, as the following Monday, Tyler appointed a new Cabinet. Later that day, 60 Whigs congregated in a plaza near the Capitol, claiming they could no longer be responsible for Tyler’s actions – leaving the President without a party. For the nearly four years of his term, Tyler had “the most disrupted Cabinet in presidential history.” 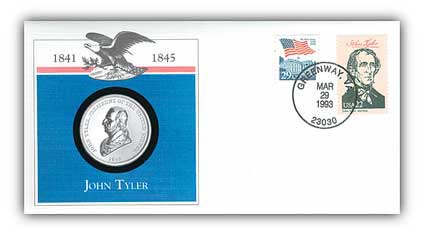 Tyler’s battle with Congress continued as he vetoed two more tariff bills. However, when government revenues dropped dangerously low, Tyler agreed to the Tariff Act of 1842. This helped the economy, but put Tyler at odds with both the Northern Whigs (who criticized him for not creating a properly protective tariff) and the Southern states’ rights allies (who viewed the tariff as overly protective).

Tyler remained focused on his job in spite of his troubles with the Cabinet. Early in his administration, he realized the importance of opening trade with China, and organized a diplomatic mission there. This mission established an American consulate in China and initiated commercial trade between the two nations.

In 1842, Daniel Webster, Tyler’s only remaining original Cabinet member, negotiated the Webster-Ashburton Treaty with Great Britain. This settled a long-standing border dispute between the two countries that more than once nearly led to war. Although they were unable to establish the boundaries of Oregon, the treaty clearly defined the border between Maine and Canada. Tyler also invoked the Monroe Doctrine on Hawaii, warning the British to stay out of Hawaii’s affairs. This began Hawaii’s annexation to the U.S. 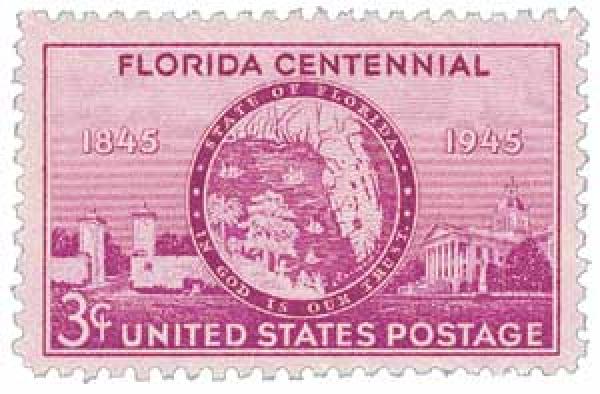 U.S. #927 was issued for the 100th anniversary of Florida’s statehood.

As he had served for some time without a party, Tyler wanted to create his own. He hoped that by annexing Texas to the U.S., he could build up enough support to establish his party. Tyler named his party the Democratic Republicans and used the slogan “Tyler and Texas!” With slavery supporter John C. Calhoun as his new Secretary of State, the Senate would not pass the treaty annexing Texas. Eventually, Tyler dropped out of the race. James K. Polk won the election, at which point both houses finally approved annexation. Tyler signed the bill annexing Texas to the United States three days before the end of his term in office. On his last day in office, March 3, 1845, Florida was admitted to the U.S. as the 27th state.

After leaving Washington, Tyler retired to his Virginia plantation that he named “Sherwood Forest.” Tyler remained out of the public eye until February 1861, when he attended the Virginia Peace Convention. Tyler’s stance on slavery and states’ rights led him to side with the Confederacy when the war began. He became a delegate to the Provisional Confederate Congress and was elected to the House of Representatives of the Confederate Congress, but died before he could take office – on January 18, 1862. Tyler’s death is marked as the only one in presidential history not mourned in Washington, due to his support of the Confederacy. He is also considered to be the only President to die outside of the U.S., as Virginia was then a part of the Confederate States of America.