Discovery of the Terracotta Warriors 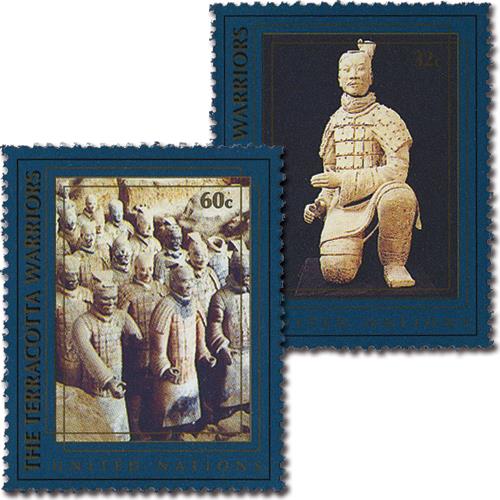 On March 29, 1974, the Terracotta Warriors were discovered.  The collection of over 8,000 life-sized figures is the largest pottery figurine group found in China.

The figures were created as part of the tomb of Qin Shi Huang, the first emperor of China.  As a form of funerary art, they were buried with the emperor around 210-209 BCE and believed to protect him in the afterlife. 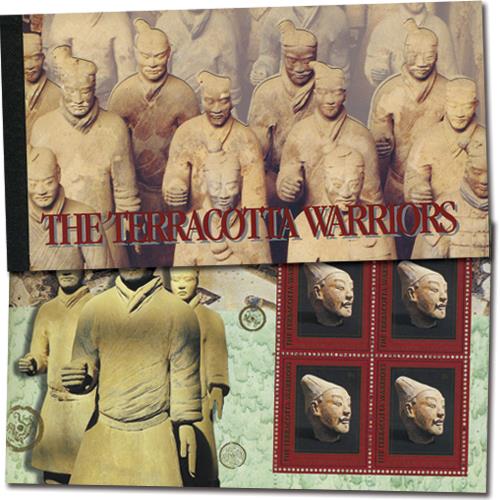 Work on the tomb complex began in 246 BCE, shortly after the 13-year-old Emperor Qin took the throne.  Work on the massive mausoleum would eventually include about 700,000 workers.  In addition to the statues, the complex included palaces, towers, valuable artifacts and reportedly 100 flowing rivers of mercury. 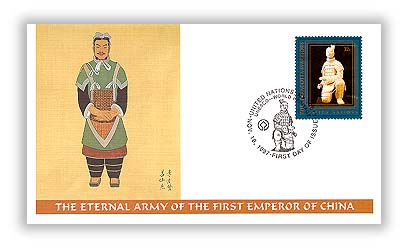 On March 29, 1974, three farmers were digging a well less than a mile from the emperor’s tomb at Mount Li when they found pieces of pottery.  This prompted a group of Chinese archaeologists to come and see the discovery for themselves.  They then began to carefully excavate the site and eventually unearthed a massive group of warriors.

The archaeologists found three distinctly separate vaults holding 8,099 life-sized terracotta soldiers and horses.  These vaults were situated between the emperor’s tomb and enemy territory.  Each of the life-sized figures is unique in height, hair, and facial features.  In addition, the terracotta soldiers are posed realistically, including standing infantry, kneeling archers, and charioteers.  Modern attempts to duplicate the excellence of the ancient terracotta have failed to achieve the same high level of luster, density, and durability. 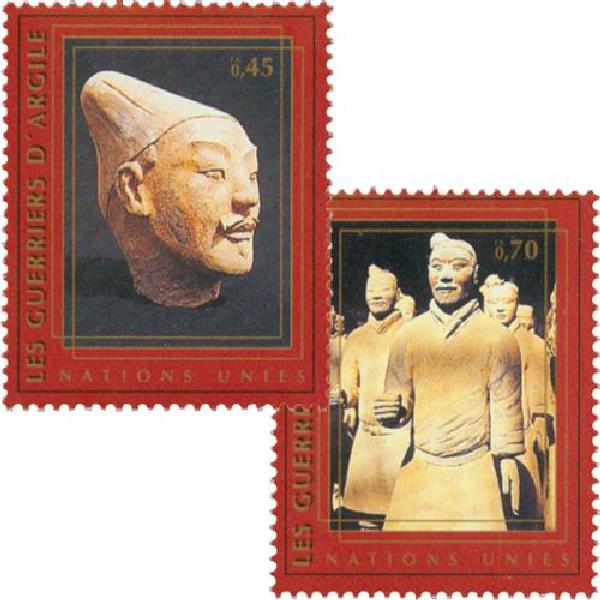 US #UNG314-15 from the UN offices in Geneva, Switzerland.

The figures found in each pit represent different sections of the army.  The largest pit holds the infantry, arranged in practical battle formation.  A line of 204 warriors wearing battle clothes stand armed with bows and arrows.  Another row of soldiers represents the flank and rear guard.  A cluster of detailed chariots and warriors represent the main force. 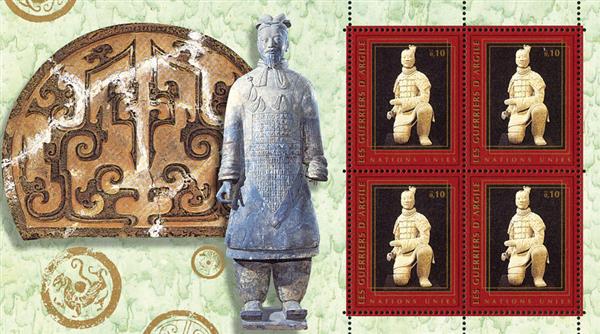 The second pit holds the cavalry, infantry, archers, and charioteers.  Early indications suggest the pit may hold as many as 350 terracotta horses, 100 cavalry steeds, and over 900 warriors.  A third pit held the officers.  Several more vaults exist but have not yet been excavated.  It’s estimated the entire complex spans about 38 square miles.  Archeologists estimate this Terracotta Army study will take 50 years to complete.  In 1987, the United Nations declared the region a World Heritage Site. 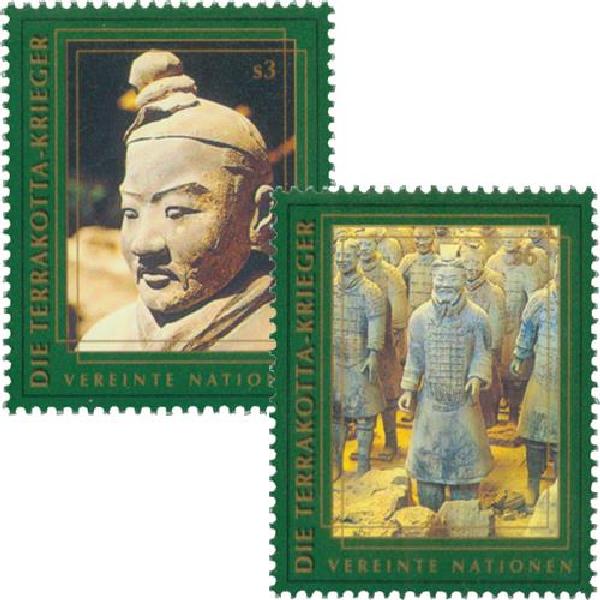 Prestige booklets were first issued by Great Britain in 1972 and have become popular around the world.  They blend stamp images with stories about the subject.  Illustrated pages explore their subjects in greater detail and highlight the beauty of the stamps.

The Terracotta Warrior booklets were issued to mark the 25th anniversary of the World Heritage Convention.  Beginning in 1972, the UN Educational, Scientific and Cultural Organization began to recognize sites of particular natural beauty or cultural impact and to support nations in preserving these sites.  The stamps also commemorate the 10th anniversary of the naming of the Terracotta Army as a World Heritage Site.

The stamp booklet has a neat, specially shaped cover giving you the sensation of gazing at an army.  Inside each booklet, you’ll find six panes of four stamps each plus 12 narrative pages packed with stories about the Terracotta Army’s excavation.