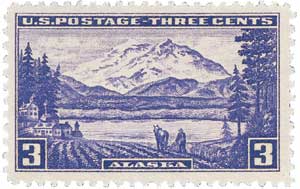 On March 30, 1867, US Secretary of State William Seward purchased Alaska from Russia in what many at the time called “Seward’s Folly.”

The Russians first explored Alaska in the 1600s and first settled there in 1784.  In 1824 and 1825, Russia signed treaties with the United States and Great Britain recognizing proper boundaries in America.  The treaties gave these nations trading rights along Alaska’s extensive coastline. 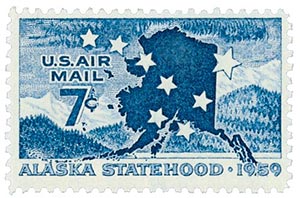 US #C53 pictures the shape of Alaska with the Big Dipper constellation, as taken from the state flag.

Russia attempted to build several industries in Alaska, including coal mining, shipbuilding, and whaling.  However, once the fur trade became less profitable, interest in the area declined.  Russia’s economy was then damaged by the costly Crimean War (1853-56).

After that war ended, Russia’s emperor Alexander II grew concerned that if war broke out with England, Alaska might be a major target that could be easily taken.  He then decided it best to sell the land.  As early as 1857, the Russians attempted to sell Alaska to America.  They also approached England with offers, possibly hoping to start a bidding war between the two nations, but the British weren’t interested in Alaska.

In 1859 and 1860, Russian and American officials met informally to discuss a possible sale.  President James Buchanan was interested and his men offered $5 million.  But the Russians didn’t think that was enough, so talks continued.  However, as America steamed toward the Civil War, the talks were stalled for several years.

After the war ended in 1865, US Secretary of State William Seward strongly supported expanding America’s territorial holdings and focused on Alaska.  In March 1867, the Russian minister began negotiations with Seward.  At the time, the American government was busy with Reconstruction and believed that such a purchase could draw public attention away from the domestic issues of the day.  On the evening of March 29, Seward began an all-night negotiation session that concluded at 4:00 the next morning with the signing of the treaty.

US #370-71 – The original design for these Alaska-Yukon stamps pictured a seal on an ice floe, but the committee didn’t want Americans to think Alaska was always cold, so they changed it to picture Seward.

Seward agreed to buy Alaska for $7,200,000 – a cost of about 2¢ per acre. While the terms “Seward’s Folly” and “Seward’s Icebox” were used to describe the deal, not all public opinion was against the purchase.  Many believed that Alaska would ultimately prove economically beneficial.  Additionally, the deal would improve relations with Russia and possibly lead to the acquisition of British Columbia. 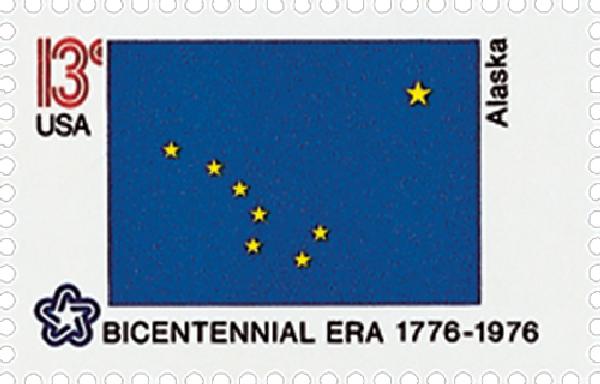 US #1681 – The state flag includes the Big Dipper to symbolize strength and the North Star for Alaska’s role as the northernmost US state.

The Senate approved the purchase days later, on April 9.  However, the House of Representatives opposed the deal and didn’t approve the funds for the purchase for over a year.  In the meantime, on October 18, 1867, US troops raised the American flag at Sitka, formally taking possession of the new territory.  It would be over 90 years before Alaska was admitted as America’s 49th state.

Click here to view the check used to purchase Alaska.