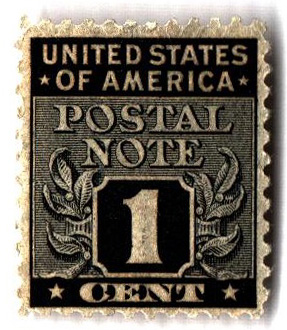 On March 31, 1951, Postal Note stamps were discontinued after just six years of use.

Postal Note stamps were first introduced on February 1, 1945. They were used in a similar manner to money orders to send smaller amounts of money to anyone in the mainland Unites States. 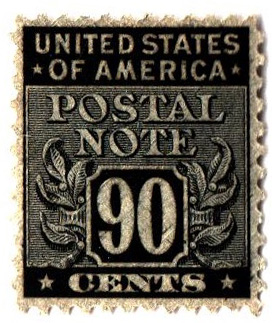 Postal Note stamps allowed people send smaller amounts of money (up to $10) at a lower cost than money orders. The cost to send a smaller-valued money order was relatively high, so postal notes gave customers a cheaper option.

Plus, postal notes were popular with postal clerks because they meant less paperwork. When a customer brought in a postal note, the clerks only had to affix the stamps to a postal note card and cancel them. The customers filled out the paperwork, saving the clerks time and effort.

Postal notes were made up of three parts. There was the payee’s coupon on the left, the paying office coupon in the middle, and the purchaser’s receipt on the right. The post office kept the middle portion, to which the stamp was affixed, as proof that the money had been paid.

In all, the stamps came in 18 denominations, while the postal notes were printed in 11 denominations. People could use up to two stamps per note to pay between 1¢ and $1. They could also insure their notes for a fee of 5¢.

Postal Note stamps could only be used at specific post offices. The service was discontinued on March 31, 1951. 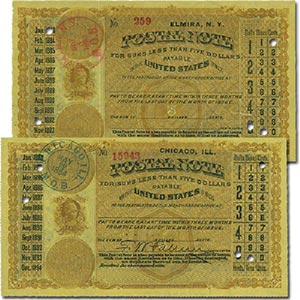 Postal Note stamps are different Postal Notes. Postal Notes were specialized money orders used between 1883 and 1894. They allowed people to send $5 to people in other cities for a fee of 3¢. An example of one of these is pictured above.