On May 15, 1993, the USPS issued the first installment in the Garden Flower Series, which would honor flowers that bloom in each of the four seasons.

This series was borne out of the 1992 Wildflowers issue.  Initially, that project had begun when the USPS asked an artist to produce color sketches of a group of garden flowers.  Instead, the artist gave the USPS illustrations of wildflowers.  The USPS liked them so much, they decided to create a 50-stamp pane, showing wildflowers that can be found in each state. 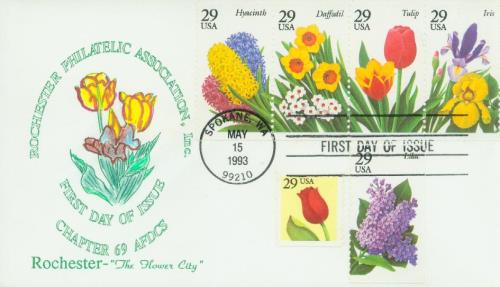 The USPS still liked the garden flowers idea and felt it would also meet consumer demand.  Part of the push behind these stamps had come from the sale of stamps in supermarkets and other retailers.  People had reported that they wanted “bright, pretty American stamps,” so the USPS thought that flower booklets might please the public.  They ran TV commercials and full-page advertisements in stamp publications announcing “The flowers are in bloom at your post office.  Buy them while they last!” and “Pick up a bunch.”  The Garden Flowers booklet was the first to be produced on the new Goebel booklet machine, which was the first to print multicolor covers.

US #2764b – Error strip with black engraving omitted.

The stamps were issued on May 15, 1993, in Spokane, Washington at the 55th annual Spokane Lilac Festival and International Lilac Society Convention.  A USPS representative said, “These are supposed to be refreshing, happy stamps that are colorful and bright.”  Though they didn’t announce it at the time, these stamps were to be the first in a new series of seasonal flower booklets.

The second booklet in the series was issued on April 28, 1994, at the Greater Cincinnati, Ohio, Flower and Garden Show.  It featured summer garden flowers.  Some people took issue with one of the stamps, which used the word “gladiola.”  A member of the Connecticut Gladiolus Society sent a letter to the postmaster general saying that “The correct name is gladiolus, not gladiola.  The word gladiolus, singular and plural, has been accepted for more than 50 years by all the local gladiolus societies in the United States and by the North American Gladiolus Council.”  The USPS responded that they had simply chosen to go with the more popular “gladiola.”

The third booklet in the series was issued on September 19, 1995, at the Quail Botanical Gardens in Encinitas, California.  This booklet featured fall blooms, though some people noted that depending on where you live in the country, some of these flowers could grow in the summer or even the spring.  One USPS representative responded that “The idea with this series was to show a grouping of flowers that would be together somewhere in a garden at the same time.  It’s not scientific.  It’s meant to be more for mass-market appeal, as opposed to botanical.”

The final booklet in the series was issued on January 19, 1996, in Kennett Square, Pennsylvania.  The flowers selected for these stamps are the hardiest plants that grow anywhere in the country that experiences winter weather. 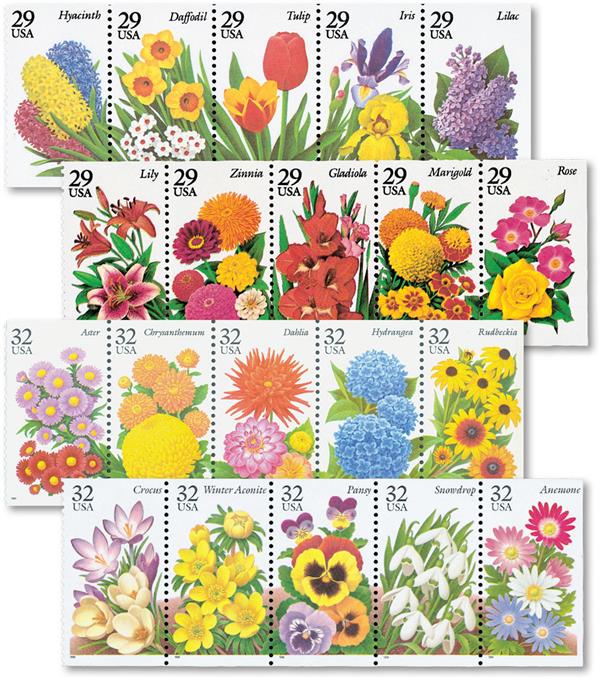