US #620 pictures the sloop Restaurationen.

On May 18, 1925, the US Post Office issued two stamps known as the Norse-American Issue.

One thousand years ago, 500 years before the arrival of Columbus in the New World, explorers landed on the shores of North America.  These men were called Vikings and the leader of at least one expedition was an adventurous Norwegian by the name of Leif Ericson.  He called the area “Vineland.” 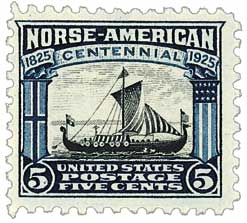 US #621 pictures a Viking ship similar to that sailed by Leif Ericson.

Eight-hundred years later, on October 9th, 1825, the first permanent Norwegian settlers sailed across the ocean into New York Harbor, ready to make America their home.  For the 100th anniversary of the Norwegian immigration to America and almost 1,000 years after the Viking explorations, the United States honored both historic events with a beautifully engraved set of two bi-color stamps.  It was called – appropriately – the Norse-American Issue and appeared for the first time on May 18, 1925. 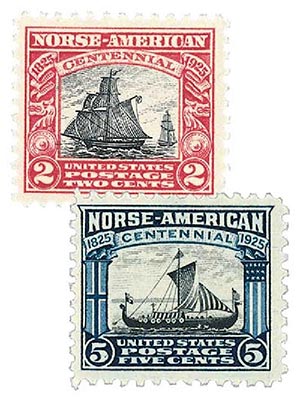 These were among the handful of stamps produced since the 1901 Pan-Americans to feature bi-color printing, a costly and time-consuming process.  Because the stamps took so long to print, they were produced in much smaller quantities than other stamps of the day.  Producing large quantities of the stamps was difficult too, because they were printed in sheets of 100, rather than 400, like most stamps at that time.

When the stamps were released, they were in great demand, with post offices around the country receiving several calls for them daily.  A second printing was suggested, but it was far too costly.  It has been estimated that less than 300 post offices received the stamps, with some only getting one or two sheets each, making them even more difficult to find today. 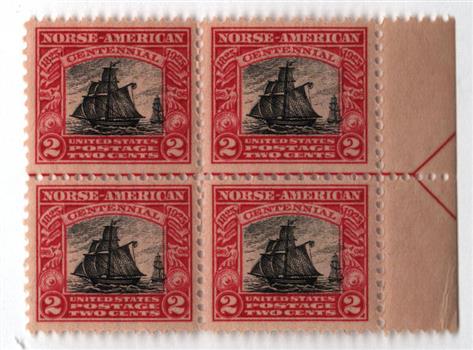 US #620 – Mint Right Arrow Block. We have lots more neat formats for both of these stamps.

The first Norwegian immigrants in America arrived in New York on October 9, 1825, aboard the ship Restaurationen.  Upon arrival in America, the captain was arrested for carrying 52 passengers, far too many for such a small ship.  President John Quincy Adams pardoned him a month later.  The passengers from the ship established their first settlement at Kendall, New York.

With no known images of the actual Restaurationen, the design for the 2¢ stamp was based on a sister ship of similar design, built at the same time and place as the one honored.  The stamp’s detailed frame pictures dragonheads and shields similar to those found on ancient Norse ships. 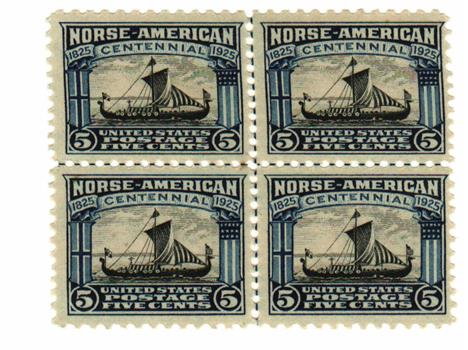 US #621 – Mint Center Line Block. To see all the formats we have, click on the single stamp images above.

Around 1000 A.D., Leif Ericson and his crew of 35 men became the first Europeans to reach North America.  They sailed a ship similar to the one shown on the 5¢ Viking ship stamp – which pictures a US flag.  Critics claimed this was a mistake, as the American flag wasn’t designed until centuries later.  Officials claim the design shows a replica sailed from Norway to America in 1893 for the World’s Columbian Exposition, which did carry an American flag.