US #1868 from the Great Americans Series.

Lillian Evelyn Moller Gilbreth was born on May 24, 1878, in Oakland, California.  Dubbed “America’s first lady of engineering,” Gilbreth combined psychology, engineering, and scientific management to improve efficiency and productivity for a number of businesses and industries.

Gilbreth was a bright child, advancing through school grade levels quickly.  She was also elected vice president of her senior class in high school.  Though Gilbreth’s father objected to her going to college, he agreed to let her try it for a year.  Gilbreth finished that year in the top of her class and was permitted to continue her education.

At the University of California, Gilbreth majored in English while also studying philosophy and psychology.  She also won a poetry contest and performed in school plays.  Graduating in 1900, she was the first woman in the school’s history to give a commencement address.  Gilbreth went on to earn a Masters and Ph.D. 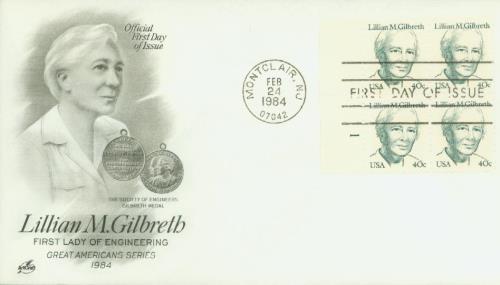 Gilbreth worked with her husband Frank, to run Gilbreth, Incorporated, a management consulting and industrial engineering firm.  The Gilbreth’s also wrote several books and over 50 scientific papers together.  Among the Gilbreth’s projects were time-and-motion studies.  They set up video cameras to record workers and then analyzed those videos to redesign machinery that was more in-tune with workers’ movements.

These changes would also help to increase efficiency and decrease fatigue.  The Gilbreth’s work was a precursor to the field of ergonomics.  Other innovations the Gilbreth’s encouraged were better lighting, regular breaks, suggestion boxes, and free books.  They called their program the Gilbreth System with the slogan “The One Best Way to Do Work.”  Some of their clients included Macy’s and Johnson & Johnson. 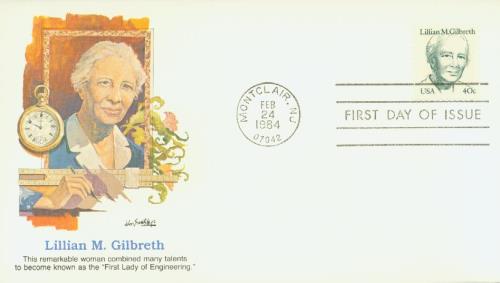 After her husband’s death in 1924, Gilbreth continued to research, write, teach, and consult businesses.  She also began exploring how she could apply her research to the home.  She “sought to provide women with shorter, simpler, and easier ways of doing housework to enable them to seek paid employment outside the home.”  As a result, Gilbreth developed the “work triangle” and linear-kitchen layout that is often still used today.  She also invented the foot-pedal trash can and wall light switches and suggested adding shelves to the inside of refrigerator doors as well as the inclusion of the butter and egg holders.  Gilbreth also filed patents for an improvement on the electric can opener and wastewater hose for washing machines. 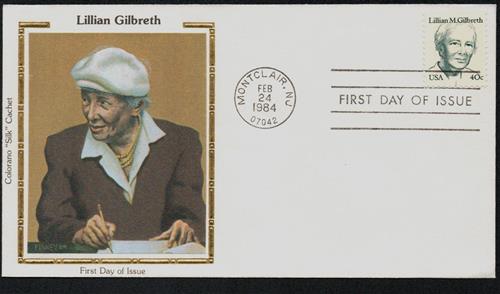 Throughout her career, Gilbreth was also dedicated to teaching and education.  She and her husband at one point gave free lessons in scientific management.  In 1940, she became the country’s first female engineering professor at Purdue.  She taught at several other colleges over the years as well, including the University of Wisconsin, Bryn Mawr College, Rutgers University, and the Massachusetts Institute of Technology.  She also traveled extensively delivering lectures at business conferences and colleges.

Over the years, Gilbreth lent her time to volunteering and advised several government agencies and nonprofit groups, including the Girl Scouts.  During the Depression she headed the Share the Work program and the President’s Emergency Committee for Unemployment.  During World War II she advised the Office of War Information and the US Navy on labor issues.  She also provided similar aid during the Korean War, serving on the Defense Advisory Committee on Women in the Services. 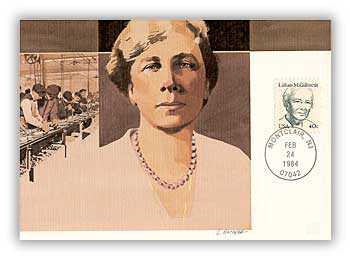 Gilbreth died on January 2, 1972.  She received a number of awards and honors during her lifetime, and was often the first woman to receive them.  Several engineering awards have been named in her honor.  Additionally, two of her children wrote books about their family’s life – Cheaper by the Dozen (1948) and Belles on Their Toes (1950) – which were later turned into movies.