Opening of the Chrysler Building 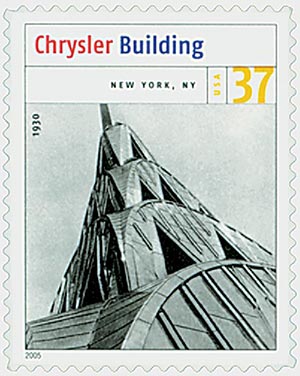 U.S. #3910b – from the Modern American Architecture issue.

On May 27, 1930, the Chrysler Building, the tallest man-made structure at the time, opened to the public.

The art deco skyscraper was the brainchild of auto manufacturer William Chrysler, who wanted a monument to his growing car company. He hired Brooklyn-born architect William Van Alen to design and build a massive building that would stand apart in the Manhattan skyline.

Construction on the building began on September 19, 1928. Its construction included the use of 391, 881 rivets and about 3,826,000 hand-laid bricks. While the building was under construction, 40 Wall Street (also known as the Bank of Manhattan Building) was also being built. The men behind these buildings were soon in a war to create the world’s tallest building. The planners of 40 Wall Street change their original plans from 840 feet to 927 feet, to surpass the height of the Chrysler building. 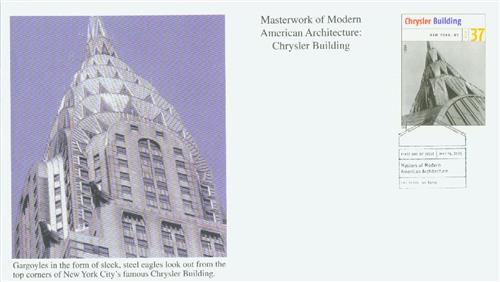 But Chrysler was insistent that his building would be the tallest and worked out a secret plan to win. He had a 125-foot long spire built secretly inside the building and then placed atop the Chrysler Dome. 40 Wall Street was completed first, so it held the title of world’s tallest building for about a month. But once the Chrysler Building was completed and opened on May 27, 1930, its 1,048 feet height made it the world’s tallest structure. (This title was in turn taken away a year later with the completion of the 1,250-foot tall Empire State Building.)

U.S. #3184j – The Chrysler Building is often described as the epitome of the art deco style.

To make the building stand out and represent Chrysler, they chose shining steel automobile icons to decorate the building exterior. Chrysler had tested the alloy – a mixture of chrome, nickel and steel – to be sure that exposure would not tarnish its silver glow. Large metal hubcaps, giant winged radiator caps, and huge hood ornaments also adorned the building. Finally, a sunburst-patterned, stainless steel dome was made to support the needle-like spire.

Click here for photos and more about the Chrysler Building.