Opening of the Golden Gate Bridge 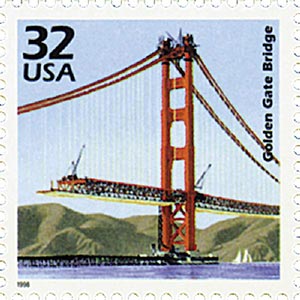 US #3185l – The bridge’s vibrant orange paint makes it easier to see through dense fog. Click image to order.

On May 28, 1937, the Golden Gate Bridge officially opened to traffic.

The Golden Gate is a narrow passage of water that connects San Francisco Bay to the Pacific Ocean.  Formed by the erosive water from the Sacramento and San Joaquin Rivers during the Ice Age, the deep channel features powerful tidal currents.  Dense fog forms over the region as cool, moist, ocean air travels inland and meets warmer temperatures.  The usual thick fog may help to explain why several seasoned explorers failed to discover the Golden Gate until 1769.

US #403 was a re-issue for the 1915 Panama-Pacific Exposition. (Click the image for the stamp story.) Click image to order.

On August 5, 1775, Juan de Ayala steered his ship, the San Carlos, into the bay, becoming the first European to pass through the strait.  It became known as the Boca del Puerto de San Francisco, or the Mouth of the Port of San Francisco.  John C. Frémont renamed the area in 1846, and wrote in his memoirs, “To this Gate I gave the name of Chrysopylae,” which means Golden Gate.

The idea of building a bridge across the Golden Gate Strait was proposed as early as 1872.  During the early 1900s, many engineers doubted it could be done, and others speculated it would cost as much as $100 million.  In 1930, after much discussion, voters within the Golden Gate Bridge and Highway District put their homes, farms, and businesses up as collateral to support a $35 million bond issue to finance building the bridge.  The bridge was developed from the imagination of engineer Joseph Strauss, with the help of architect Irving Morrow, bridge designer Leon Moisseiff, and engineer Charles Alton Ellis. 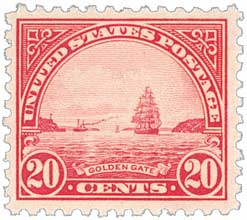 US #567 pictures the W.F. Babcock sailing into the Golden Gate, as taken from a painting by W.A. Coulter. Click image to order.

When construction of the bridge was started on January 5, 1933, the contractors encountered some unique difficulties.  To lay the earthquake-proof foundation, they had to blast rock that was under water.  They also had to contend with the weather – on one foggy day, a ship collided with the bridge, causing extensive damage.  Construction workers had to take special safety precautions when building the bridge as well.  A safety net under the bridge saved the lives of 19 men who proudly formed the “Half Way to Hell Club.”  But on February 17, 1937, ten men died when a scaffold fell through the net.  Construction was completed on April 19, 1937.

The bridge’s opening was celebrated with a week of events called Golden Gate Bridge Opening Fiesta Week, lasting from May 27 to June 2.  The week’s events kicked off on May 27 with Pedestrian Day.  Some 18,000 people lined up to be among the first to cross the bridge when it opened at 6 a.m.  Over the course of the day, about 200,000 people crossed the bridge.  Many “firsts” were recorded, including the first to run, roller skate, tap dance, ride a unicycle, play the harmonica, push a baby carriage, play the tuba, or cross on stilts.  The day’s events also included a parade and fireworks. 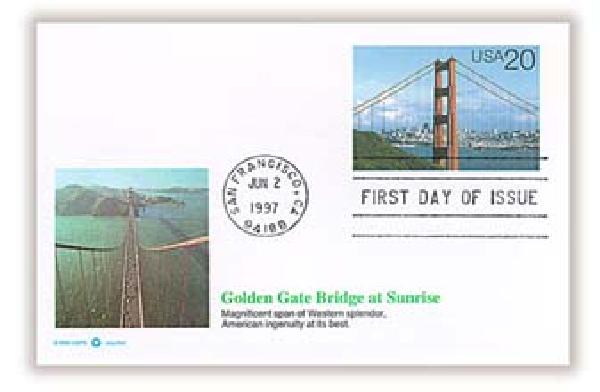 US #UX282 – Postal Card picturing the bridge in daylight. Click image to order.

On May 28, the bridge officially opened to traffic.  The day began with a dedication ceremony at 9:30 a.m., followed by the International California Redwood Log-Barrier Sawing Contest.  At 11 a.m., 500 planes from Naval aircraft carriers flew over the bridge.  And at noon, President Franklin Roosevelt pressed a telegraph key from his office in the White House to declare the bridge open. 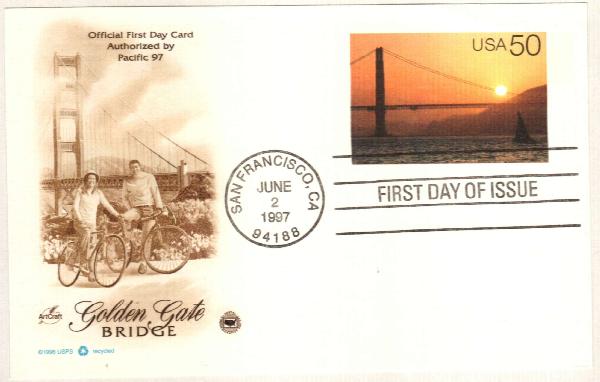 US #UX283 – Postal Card picturing the bridge at sunset. Click image to order.

The Golden Gate Bridge is a miracle of engineering.  Its 4,200-foot-long main section is suspended from two cables hung from towers 746 feet high.  At the middle of the bridge, the road is 265 feet above the water.  The Golden Gate Bridge is an internationally recognized symbol of American know-how and ingenuity.  When it was completed in 1937, it was the longest suspension bridge in the world.  The American Society of Civil Engineers also honored it as a “Wonder of the World” structure. 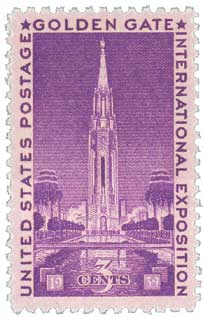 US #852 pictures the “Tower of the Sun” from the 1939 Golden Gate Exposition.  Click image to order.

The expo’s theme was “Pageant of the Pacific.”  With this theme, the exposition looked beyond America, the architecture and flavor reflecting a unique blend of European, Asian, and Latin American influences.  The Golden Gate International Exposition was California’s most recent fair of this impressive size.

Click here for a brief video about opening day.