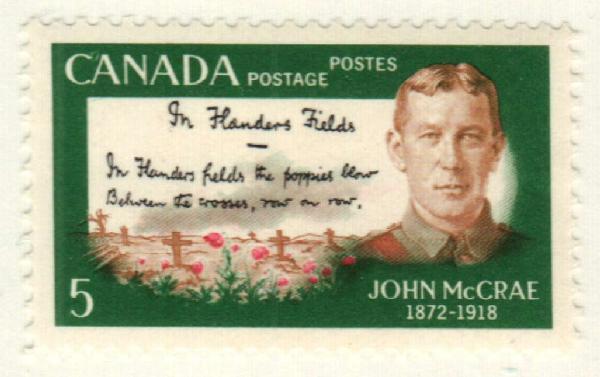 Canada #487 was issued for the 50th anniversary of McCrae’s death.

On May 3, 1915, Canadian physician John McCrae penned the poem, “In Flanders Fields,” in honor of a fallen fellow soldier following the Second Battle of Ypres.

The small town of Ypres was located in the path of Germany’s intended route across northern Belgium and into France, making it a prime location for several World War I battles.  Launched on April 21, 1915, the Second Battle of Ypres was Germany’s first and only offensive of the year.

Although the overall battle ended in a virtual stalemate, it was the first time former colonial troops defeated a European power on European soil (the 1st Canadian Division’s victory over German troops in the smaller Battles of St. Julien and Kitcheners’ Wood).

U.S. #2154 was based on a sketch by Captain Harvey Dunn of U.S. troops at the Second Battle of the Marne.

More significantly, the Second Battle of Ypres saw the first use of poison gas on the Western Front.  German troops had carried 5,730 gas cylinders weighing 90 pounds each to the front.  After shelling the Allies’ line, the canisters were opened, killing a number of German troops.

Prevailing winds carried the dense gas toward the Allies, filling their trenches with toxic fumes.  Those that were not killed instantly fled the trenches, only to be mowed down by gunfire.  However, the gas also kept the Germans from exploiting the gaps in the Allied lines, which led to a lengthy stalemate. 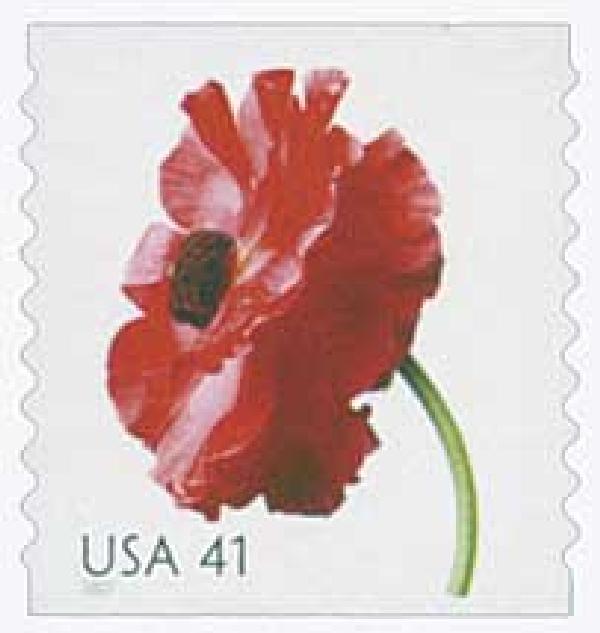 Canadian John McCrae was a poet and a physician who believed it was his duty to defend his country.  He joined the Canadian Expeditionary Force at the outbreak of World War I and was present at the Second Battle of Ypres.  After the Germans attacked their position with chlorine gas on April 22, 1915, the Canadians held their line for over two weeks.

In a letter to his mother, McCrae noted the men of his platoon had not had a change of clothing in 17 days, and that “gunfire and rifle fire never ceased for sixty seconds… behind it all was the constant background of the sight of the dead, the wounded, the maimed…”

A shell killed McCrae’s friend Alexis Helmer on May 2.  McCrae then conducted his funeral service.  McCrae was especially taken with how quickly poppies grew around the fresh graves at Ypres.  The battle led to an increase in the soil’s lime content, which encouraged the growth of the hearty flower.

The next day, McCrae was inspired by all he’d witnessed and pen a poem entitled “In Flanders Fields.” A sergeant major in McCrae’s unit watched as he composed the poem and noted the piece was “almost an exact description of the scene in front of us both.”  Written from the point of view of a deceased soldier, the poem became a rallying cry among Allied nations to continue fighting and support the war effort.  McCrae died of cerebral meningitis in 1918 while working in a military hospital. 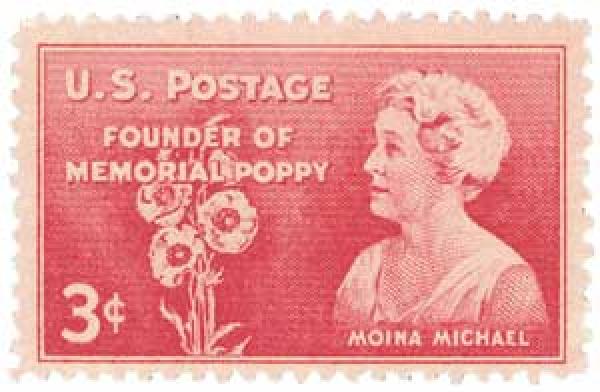 In America, Moina Michael was a World War I volunteer and a primary contributor to the use of poppies as a memorial for veterans of that conflict.  Michael was so inspired by McCrae’s poem, that she wore a red poppy every day as a symbol of remembrance.  After the war, Michael, a professor at the University of Georgia, raised money for disabled veterans in need by selling silk poppies.  The poem also served as an inspiration to the Franco-American Children’s League, which began selling poppies in 1921 to benefit the orphans of war in France and Belgium. 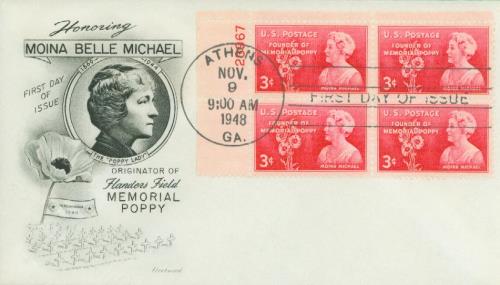 Michael also wrote a poem in response to McCrae’s called “We Shall Keep the Faith.”  The American Legion Auxiliary adopted the poppy as a tribute to war veterans.  “Remembrance Day,” a United Kingdom holiday similar to the American “Veteran’s Day,” is sometimes referred to as “Poppy Day.”