Opening of the USS Arizona Memorial 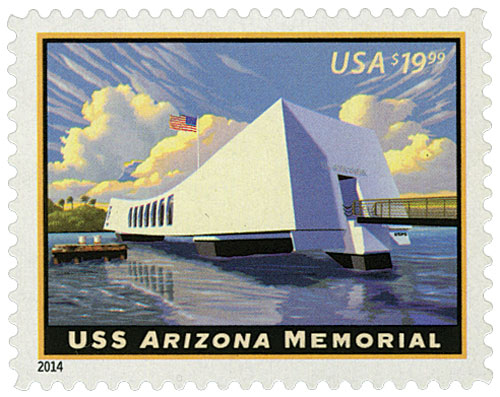 US #4873 from the American Landmarks Series. Click image to order.

On May 30, 1962, the USS Arizona Memorial was officially opened to the public.

The secretary of the Navy gave the USS Arizona her name.  The ship took 15 months to complete and measured a staggering 608 feet long.  The Arizona was designed to travel at 21 knots, but during a trial run in September 1924 was clocked even faster.  The ship truly exceeded all expectations.

The Arizona stayed in US territory during World War I but was re-assigned to the Pacific Fleet in 1931.  Japanese power was quickly growing and the US sought a deterrent.  So in April of 1940, the Navy sent the Pacific Fleet to Pearl Harbor as a show of military strength.  As one of the most impressive ships, the Arizona was a valuable addition. 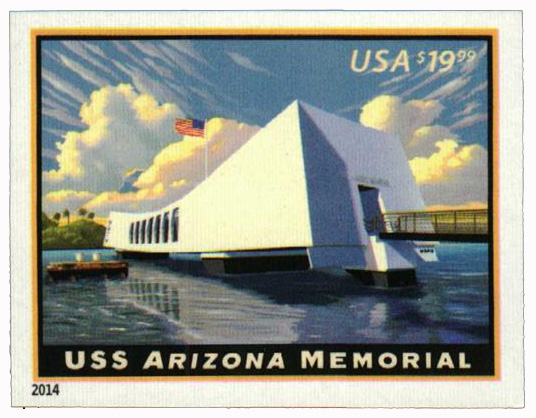 US #4873a – Imperforate USS Arizona stamp. Click image to order.

Unfortunately, the Navy’s scare tactic failed.  On December 7, 1941, Japan attacked Pearl Harbor despite the naval presence there – the USS Arizona did not survive the attack.  Parts of the ship were repurposed in other World War II vessels, but the hull was beyond salvageable.  It remains submerged in the harbor to this day.

Following the war, a committee began lobbying to create a monument above the Arizona’s remains.  After President Dwight D. Eisenhower established the site as a national memorial in 1958, public and private donations were used to finance it. 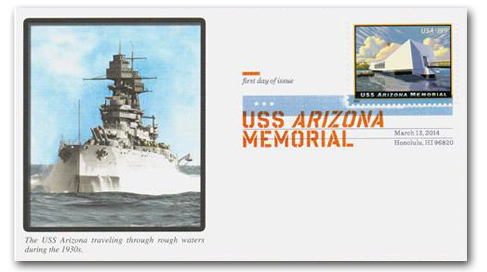 The $500,000 needed for construction had to be raised privately, not through government funding.  $250,000 was raised in the first few years, but donations slowed over time.  Then Colonel Parker, Elvis Presley’s manager, read an article in a Los Angeles newspaper about the lack of funding, and knew Elvis would want to help out.

Presley was scheduled to film the movie Blue Hawaii, so he arranged to do a benefit concert while he was there.  On March 25, 1961, Elvis performed at Bloch Arena in Pearl Harbor, Hawaii before a crowd of 4,000 fans.  Tickets for the concert cost between $3-$10, with 100 seats close to the stage that cost $100.  On trend with his giving nature, Elvis and Colonel Parker bought half the special seats for patients of Tripler Hospital in Hawaii.  Presley performed 15 songs and ended with a slide across the stage on his knees. 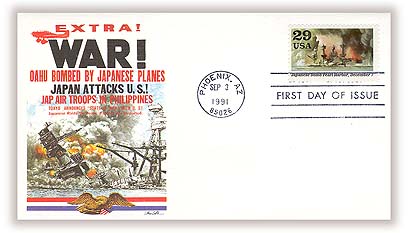 US #2559i – Fleetwood First Day Cover. Click image to order.

Elvis’ concert single-handedly raised over $64,000 for the USS Arizona Memorial project.  His concert also helped regenerate public interest and support for the project.  Donations began to pour in and the memorial was completed.

On May 30, 1962, the memorial was officially dedicated.  About 200 invited guests and 800 additional visitors attended the ceremony.  The events began with a prayer from a chaplain followed by a band playing the Navy Hymn and then taps. 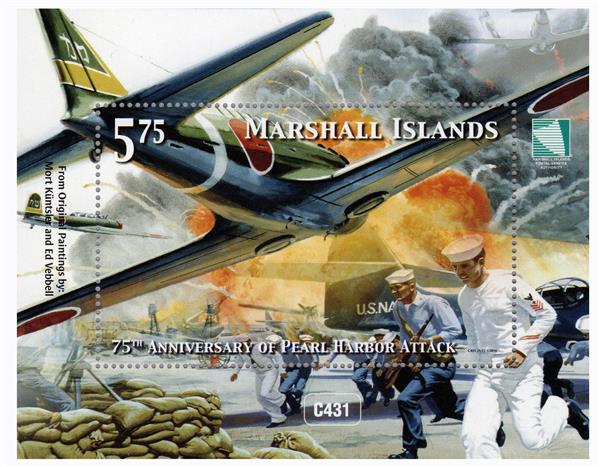 Marshall Islands #1147 was issued for the 75th anniversary of the Pearl Harbor attack. Click image to order.

The monument is a floating structure designed by Alfred Preis.  Preis later explained his concept, “Wherein the structure sags in the center but stands strong and vigorous at the ends, expresses initial defeat and ultimate victory.”  This represents a timeline of America around World War II.  Before the war, the US was proud that it could stay out of the conflict while helping its allies.  The middle shows our country at the time of the Pearl Harbor attack.  The second peak reflects the victory at the end of the war and America’s new position of power and prominence in the world.

A shrine stands at the far end of the memorial.  A marble wall is inscribed with the names of those who were killed in the attack.  A smaller plaque to the left has the names of crew members who survived the attack, but requested to be buried with their shipmates when their lives ended.  Navy divers place an urn filled with the sailor’s ashes inside the wreck. 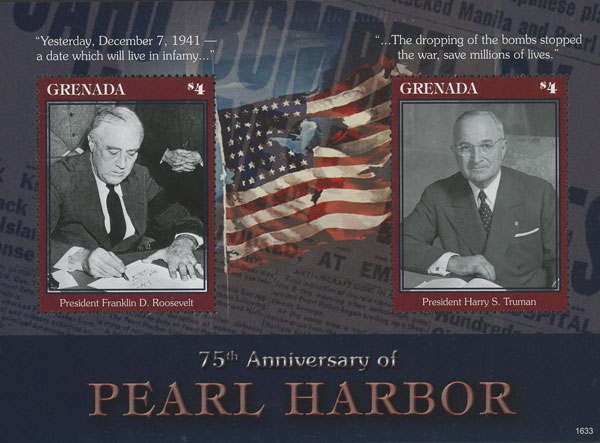 The USS Arizona Memorial is visited by two million people annually and can only be reached by boat.  As originally stipulated in the design, it holds up to 200 people at once.  The Arizona herself, not the memorial, flies the US flag from her severed mast.  Traditionally, only active naval vessels may fly the flag, but an exception was made for the Arizona.

Drops of oil rise to the surface of the water.  The day before the Japanese attack in 1941, the ship took on a full load of fuel – about 1.5 million gallons.  It’s estimated about one million gallons burned in the two days following the attack.  The remaining fuel seeps out in small droplets that have been called “the tears of the Arizona.” 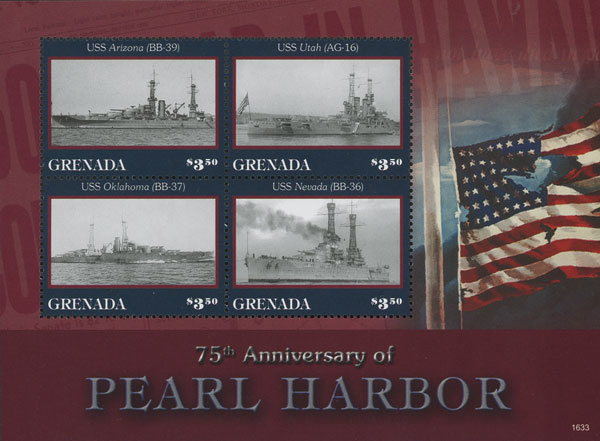 Navy, Coast Guard, and merchant ships perform a practice known as the “manning of the rails” when they pass the memorial.  Crew members stand at attention by the guardrails and salute the USS Arizona as their ship enters the harbor.  Foreign military vessels entering the harbor for joint military exercises often perform the ritual as well.

Today the USS Arizona Memorial is one of several sites that make up the Pearl Harbor National Memorial.  It was declared a National Historic Landmark in 1989.