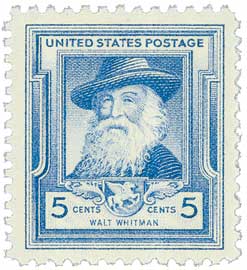 The second of nine children, Whitman was called “Walt” at a young age to differentiate from his father, Walter Whitman, Sr. His family moved frequently due to bad investments. Whitman remembered his childhood as restless and unhappy. But he did have one happy childhood memory from July 4, 1825. On that occasion he met the Marquis de Lafayette, who lifted the six-year up in the air and kissed him on the cheek.

Whitman attended school until he was 11, after which he began working to help the family. He worked in a lawyer’s office before taking a job at the weekly paper Patriot. While there, he may have written occasional filler material. He went on to work for another paper and submitted some of his early poetry anonymously to the New York Mirror.

Whitman briefly tried teaching but didn’t find it satisfying so he founded his own newspaper, the Long Islander. He worked as publisher, editor, pressman, and distributor. He sold the publication after 10 months and for the next few years tried his hand at teaching again and worked for several other papers before serving as a founding member of the Free Soil Party.

By 1850 Whitman was unhappy with the work he was doing and resolved to become a professional poet. He spent the next five years writing a collection of poetry he envisioned as an American epic. Then, in 1855, he published the book, Leaves of Grass, at his own expense. Just 795 copies were printed at the time. Whitman didn’t identify himself as the author on the cover, though he included an engraving of himself inside. And about 500 lines into the copy he introduces himself as “Walt Whitman, an American, one of the roughs, a kosmos, disorderly, fleshly, and sensual, no sentimentalist, no stander above men or women or apart from them, no more modest than immodest.”

The first edition of Leaves of Grass included 12 poems, totaling 2,315 lines. It contained such poems as “Song of Myself” and “I Sing the Body Electric.” The poems introduced a grittier, more physical style that shocked many people at the time. In fact, some considered it obscene. But others, notably Ralph Waldo Emerson, praised the book, which helped it to gain national attention.

The following year the book was released with 20 additional poems, though the publisher nearly didn’t release it because of the controversy. Whitman continued to add poems to Leaves of Grass for the rest of his life. 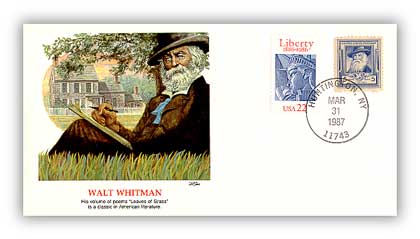 Item #81857 – Bram Stoker based the character Dracula on Whitman

At the start of the Civil War, Whitman printed his poem, “Beat! Beat! Drums!” to rally the North. After one of his brothers joined the Union Army, Whitman feared he had died in battle and set out to find him. Though he found him alive, he was shocked at the battle injuries he’d seen along the way and wanted to join the Union cause. He traveled to Washington, D.C., and got a job in the army paymaster’s office and began working as a volunteer nurse in the army hospitals. Whitman detailed his experiences for a New York newspaper.

In January 1865, Whitman received an appointment to the Bureau of Indian Affairs in the Department of Interior. However, the job was short-lived. A new Secretary of the Interior took over months later and fired him because of his writing in Leaves of Grass. Luckily he got a job in the Attorney General’s office, where he interviewed form Confederate soldiers for presidential pardons. It was also during this time that he published “O Captain! My Captain!” This was a more conventional poem that honored Abraham Lincoln and helped to increase Whitman’s popularity with the public. In the coming years, Whitman also began to receive international acclaim, though he remained with the Attorney General’s office until 1872.

The following year Whitman suffered a stroke and moved to Camden, New Jersey, to live with his brother. He then bought his own house in 1884. He continued to write until his death on March 26, 1892. The final edition of Leaves of Grass had grown to include over 400 poems.