On May 31, 2002, the USPS issued the first stamp in the American Design Series.

In the early 1990s, Lou Nolan designed a proposed stamp booklet called “Made in America” for the USPS, but it was never issued.  The designs were kept until 2002, when Nolan’s Toleware design was used as the first stamp of the American Design Series.

Hoping to catch the interest of postal customers and stamp collectors alike, the USPS issued the attractive American Design series in 2002.  The American Design Series stamps have low denominations (from 1¢ to 10¢), and were issued to help customers pay for unusual postal rates of overweight packages or to make up the difference of rate changes.  The stamps feature beautiful objects created by American designers that showcase the country’s various regions, cultures, and history. 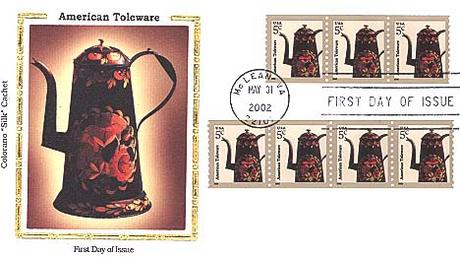 Classic American Toleware is a type of ornamental kitchenware that became popular in America in the 1800s, after being introduced a century earlier.  The word “toleware” refers to metallic items typically made of tin or pewter, coated with lacquer or varnish, and painted in elaborate designs.  The painting process began with a coat of black asphaltum (tar-like substance mixed with varnish) meant to look like lacquer.  Then brightly colored fruits and flowers were added with the design sometimes embellished with ornamental swirls.  Also called “japanned-ware” from its origin in the Orient, toleware is usually made into useful household implements such as teapots, trays, and candlesticks.  The toleware coffeepot pictured on the 5¢ stamp was made around 1850 and is now housed at the Winterthur Museum in Delaware. 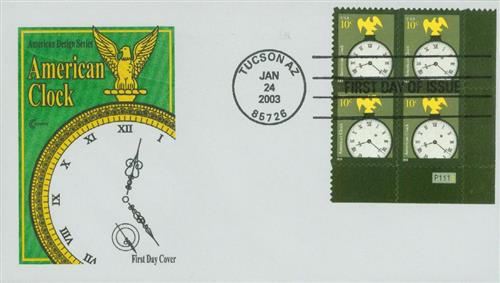 The second stamp in the series, issued in January 2003, features the American clock.  It replaced the 10¢ Red Cloud stamps of 1987-94.  The design is from a clock made around 1805 by Simon Willard of Massachusetts.  Willard was a noteworthy American clockmaker who was given complete responsibility for the clocks at Harvard University, and contributed elegant timepieces for the US Senate and Supreme Court.  Willard developed a compact wall timepiece known as the “banjo clock.”  Unlike other clocks, the design omits the striking mechanism and indicates time only by its hands and dial.  Banjo clocks feature a round opening with a painted dial.  A long-waisted wooden case and a rectangular box with a hinged door, each with decorative glass panels, surround the pendulum.  A cast iron eagle (finial) tops most banjo clocks.  Only 4,000 authentic Willard banjo clocks are known. 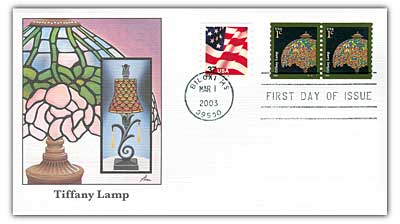 Also issued in 2003, the third stamp in the series featured the Tiffany Lamp.  With the vision of an artist, Louis Comfort Tiffany created lamps unique in their design and in the process of making the stained glass.  Tiffany developed a new way to create a luminous glass that he patented under the name Favrile.  Tiffany used this brilliantly colored glass to create the stained-glass lamps that made him famous worldwide.  First exhibited at the 1893 Chicago World’s Fair, the stunning and innovative Tiffany lamps were instantly recognized for their artistic beauty and form.  Tiffany employed hundreds of artisans at Tiffany Studios, who either carried out Tiffany’s designs or created designs under his guidance.  The shade of every lamp began with an artist’s drawing.  Artisans then spent up to a week choosing and cutting hundreds of pieces of glass for the complex design of each shade.  Leading held the leaves, flowers, and other natural shapes together.  Considered luxury items, Tiffany lamps sold at premium prices and are still prized today. 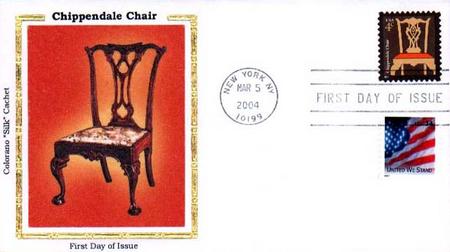 The American Design Series not only served an important postal function, but it illustrated classic items of Americana.  One example is the stamp picturing a Chippendale chair, which is its own unique part of the American “Melting Pot.”  The chair was based on the work of Englishman Thomas Chippendale in the 18th century, who incorporated Oriental designs to make what people called “Chinese Chippendales.”  The furniture was so popular that it was copied around Europe and the US, with new designs called “Gothic” and “Neo-classical” added.  The influence of three continents makes for a uniquely American treasure. 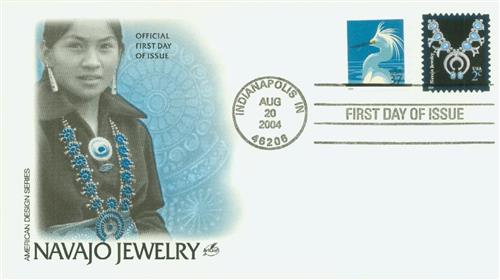 The fifth design in the series was a Navajo necklace.  In the mid-1800s, Atsidi Sani (Old Smith) became the first Navajo silversmith, learning the trade while in US captivity.  Sani later taught his sons, who taught others, spreading the new skill throughout the tribe.  Some of the earliest silverwork includes belts, bracelets, bow guards, tobacco flasks, and necklaces.  These soon led to the creation of rings, earrings, pins, hair ornaments, and buckles.  By the 1880s, turquoise stones were a popular decoration in Navajo silver jewelry.  As word spread of the beauty and craftsmanship of the Navajo jewelry, a new economy evolved with the Indians, traders, and eastern suppliers.  The silver and turquoise squash blossom necklace on this stamp is a traditional Navajo motif called nazhah, which means, “curve.”  The 2¢ stamp was first issued in 2004, and then reprinted for the 2007 rate change from 39 cents to 41 cents. 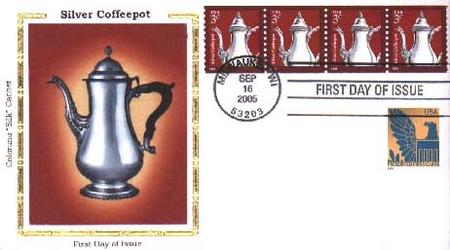 The sixth stamp in the American Design Series shows a silver coffeepot made around 1786 in Philadelphia by the Richardson brothers.  The coffeepot pictured on the stamp had been a wedding gift to Philadelphia newlyweds Margaret Rawle and Isaac Wharton in 1786.  Brewed tea, coffee, and chocolate became enormously popular in the late 17th and the 18th centuries.  Wealthy patrons asked silversmiths to craft beautiful pots to serve these beverages. 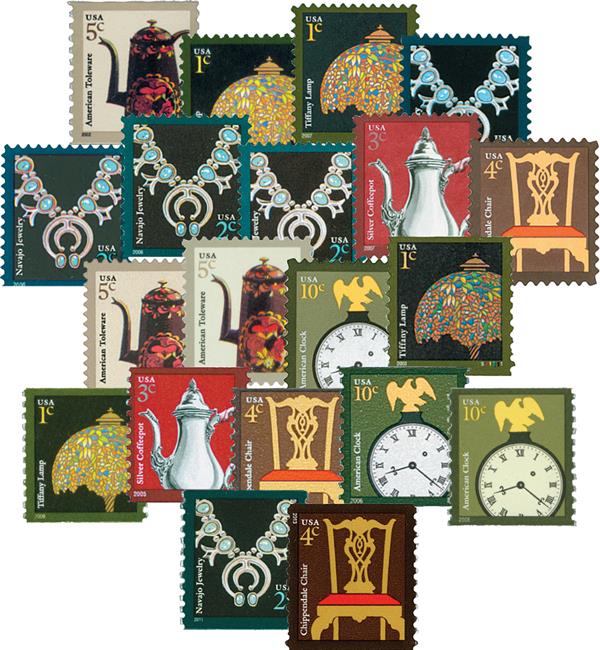 US #3612/3763 – Click the image to get the entire American Design series in one easy order. You’ll also be able to see all the individual stamps in the set (and click on those images for lots more FDC options).