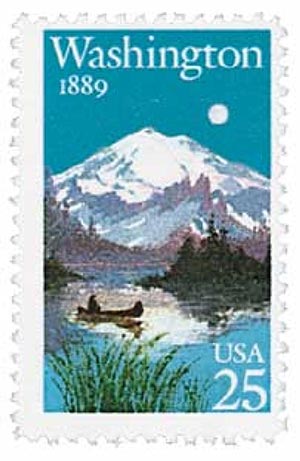 Before the arrival of Europeans, a large number of American Indians lived in what would become the state of Washington. The Cayuse, Colville, Nez Percé, Okanogan, Spokane, and Yakima tribes lived on the plains and in river valleys. The Chinook, Clallam, Clatsop, Nisqually, Nooksack, and Puyallup lived along the coast, west of the Cascade Mountains.

Spanish and English explorers sailing north from California in the 1500s were probably the first whites to sight Washington. However, Europeans did not set foot in Washington until the late 1700s. When Russian fur traders settled in Alaska, the Spanish became worried they might also claim Washington. As a result, the Spanish sent several expeditions to the area to reinforce their claim. In 1775, Bruno Heceta and Juan Francisco de la Bogeda y Quadra were the first whites to land on Washington soil. 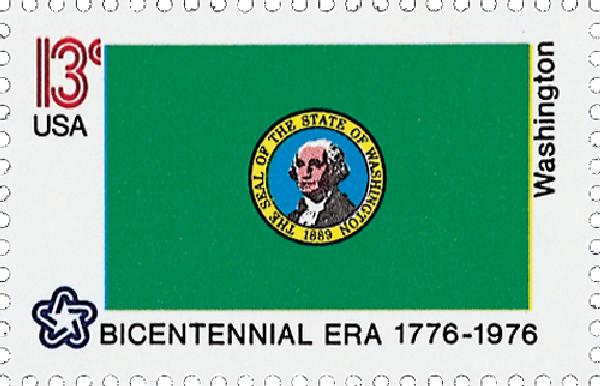 U.S. #1674 – Washington’s is the only green state flag and the only one to picture a president.

1n 1778, Captain James Cook became the first English explorer to reach this area. However, he did not get to view much of the coast, due to stormy weather. The English Captain George Vancouver completed surveys of Puget Sound and Georgia Gulf in 1794. His officer, Peter Puget, reached Puget Sound in 1792. These explorations were the basis for England’s claim to the region.

The first American to reach Washington was Captain Robert Gray of the Boston Company. Gray headed a fur-trading expedition that sailed into the harbor that now bears his name. He reached the mouth of the Columbia River in 1792. Gray’s explorations became the source of American claims to the area. In 1805, the Lewis and Clark Expedition explored Washington by following the route of the Columbia River to the Pacific Ocean. The Lewis and Clark Expedition gave America another claim to the land of the northwest. 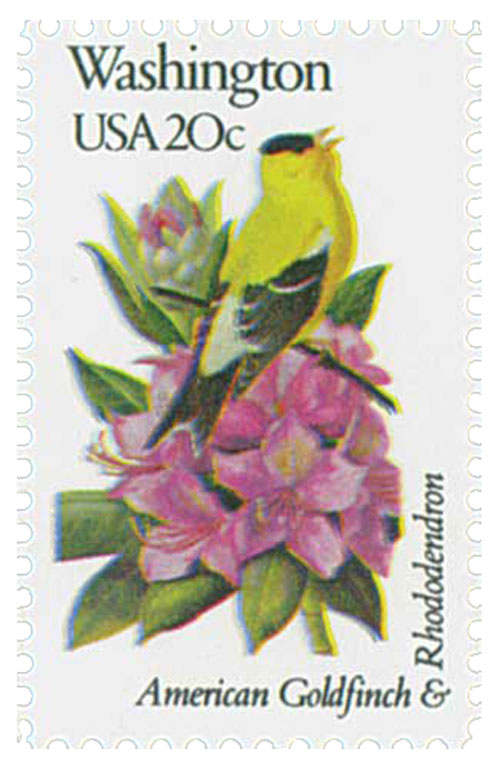 By the early 1800s, fur traders from U.S. and Britain had settled in the region. In 1810, the Canadian North West Company established Spokane House near today’s Spokane. Fur trader John Jacob Astor established the first permanent American settlement with the founding of Fort Okanogan.

The fur trade was interrupted by the War of 1812. After the war, Britain and the U.S. could not agree on how to separate the land west of the Rocky Mountains. In a compromise, it was decided citizens of both nations could settle this vast area, then known as Oregon Country. However, by the 1840s, a large number of Americans had settled the Oregon Country, and boundary dispute became a bitter issue.

During the presidential election of 1844, James K. Polk based a great deal of his campaign on the idea that any land south of latitude 54º 40′ belonged to the U.S. His supporters used the slogan, “Fifty-four forty or fight!” President Polk signed a treaty with Great Britain that set the boundary at the 49th parallel, Washington’s current border, in 1846. 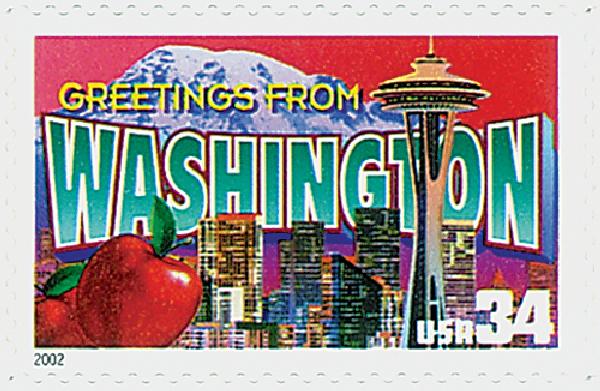 U.S. #3607 pictures the Seattle Skyline with the Space Needle and Mount Rainier.

When the Idaho Territory was established in 1863, Washington received its current boundaries. Washington’s population grew fast, fueled by the discovery of gold in Idaho, Oregon, and British Columbia. Yet, there were no major gold strikes in Washington. Many gold prospectors remained there and became farmers or loggers.

In 1883, Washington was connected to the East by rail. This caused its population to grow rapidly, leading to calls for statehood. On November 11, 1889, President Benjamin Harrison declared Washington a state. Olympia became the state capital.

Irrigation helped farmers cultivate much of the area’s dry, desert-like land. Fruit growers and wheat farmers thrived in Washington’s climate. Logging, fishing, and mining all played important roles in the state’s growing economy. The Klondike and Alaska gold rush of 1897-98 brought the state a great deal of wealth. Seattle served as the major supply center for prospectors. Washington also profited from shipping to the Far East.

Washington’s economy boomed with World War I, suffered through the Great Depression, and boomed again with World War II. During WW II, the state’s industries produced aircraft, ships, trucks, and railroad cars. In 1943, the U.S. government built a nuclear energy facility there, named Hanford Works. Hanford Works played a key role in developing the first atomic bombs. In 1960, it began generating electricity. Today, the facility is known as the Hanford Site of the U.S. Department of Energy. 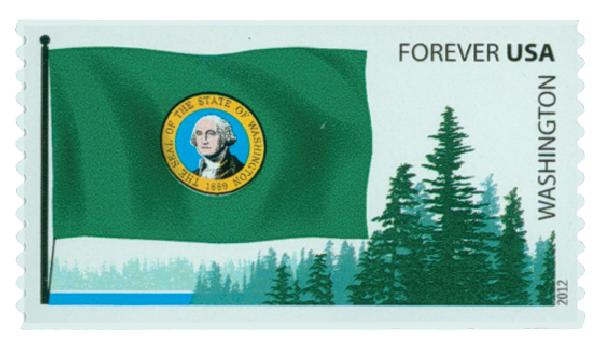 Many Washington cities benefited from the construction and expansion of U.S military bases. Over time, the importance of farming and logging in the state’s economy has declined. The development of the Columbia River has helped farmers with much-needed irrigation water and opened the river to navigation.

In 1962, the Century 21 world’s fair was held in Seattle. At the center of the fair was the 607-foot Space Needle observation tower. It remains a major tourist attraction. In an attempt to improve tourism, $130 million was spent to clean up the pollution in Lake Washington and Elliott Bay.

The expansion of the Boeing Company, an aviation manufacturer, caused the Seattle and Puget Sound areas to grow rapidly during the 1960s. At one time, nearly 10 percent of Washington’s workers were employed in the jet aircraft and related businesses. During the late 1960s and early 1970s, the aviation and aerospace industries experienced a sharp decline. By the mid-1970s, the industry had recovered, due to the need for more jet-powered aircraft. 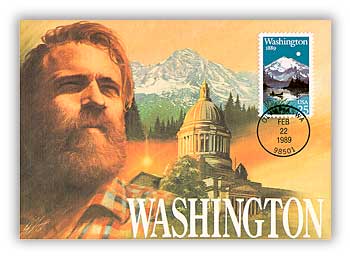 Washington has focused on attracting new industries to the state and broadening its economy. The highly skilled labor force attracted several electronics companies. During the 1970s, the Washington Public Power Supply System (WPPSS) started a plan to build five nuclear reactors to provide the state with much-needed power. Burdened with cost overruns, the WPPSS defaulted on over $2.2 billion in municipal bonds after completing only two plants. The WPPSS was the most expensive civil works project in history, as well as the largest default of its kind. Software giant Microsoft based its headquarters in Seattle, creating a huge boost for the economy.

Facebook
This entry was posted in November 2016, This Day in History. Bookmark the permalink.